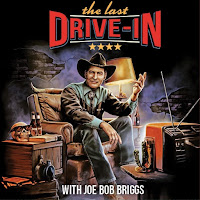 The Last Drive-In (a show on Shudder, a subscription video-on-demand service) gives out The Silver Bolo Award for excellence in horror media. On occasion, movie blogs have received this highly prestigious award, but sadly, Movie Churches never will -- only, we're sure, because horror isn't the exclusive topic here. Nonetheless, it's amazing how many horror films have been featured in this blog about clergy and churches.

But maybe it isn’t amazing at all.
Many horror films presuppose something beyond the material world: the supernatural is a reality. That's right in line with the beliefs of the orthodox church and clergy.

The Horror subgenre of Exorcism films is probably the easiest example, beginning (of course) with The Exorcist. It's one of the most acclaimed horror films of all time. , and everyone who remembers the film remembers the heroic priests in the film.
Roman Catholic priests are usually featured in exorcism films, though surely some Protestants have taken on the job. We've discussed the churches and clergy in several exorcism films, and there are others we haven't talked about (yet). Check out The Exorcist III  (but not yet The Exorcist 2: The Heretic, though we'll get to it), The Exorcism of Emily Rose, The Rite, and The Nun (which has some discussion about exorcism).

Of course, there are a number of horror films with priests where the confrontation is with Satan or evil forces where possession is not the issue. We've dealt with plenty of those: Prince of Darkness, Pastorela, and The Unholy. The End Times are often the setting, as in The End of Days,  The Rapture, The Omen, The Calling and The Way of the Wicked.

Sometimes the clergy provide the horror, which happens in The Night of the Hunter, Day of Wrath, The Hunchback of Notre Dame, The X-Files: I Want to Believe, The Purge: The Election Year, or any of the very many films about nuns. Sometimes it’s just murder in an ecclesiastical setting as in Primal Fear or Alice, Sweet Alice or Heathers (well, in this one a few scenes take place in a funeral home, but still).

Of course, not all of the supernatural elements in horror films are the same kinds of things you find in the Bible -- like, say, the ghosts in Carnival of Souls or Poltergeist II: The Other Side. There have been a surprising number of vampires in Movie Churches -- Stake Land, Thirst, From Dusk Till Dawn, Priest, Vampyr, Van Helsing and John Carpenter’s Vampires. There have been a few werewolves, in The Wolfman, Silver Bullet, The Curse of the Werewolf, and The Howling VI: The Freaks. And there’s been one weredinosaur in The VelociPastor.

There’s even been churches and clergy with alien invaders in Signs and War of the Worlds.

So though we’ll continue to look at sappy Christian films, depressing foreign films, musicals, thrillers, and comedies… Horror films will always have a place here at Movie Churches.

Posted by churchandstates at 4:48 AM