Shape Shifters Week 2: Howling VI and Curse of the Werewolf 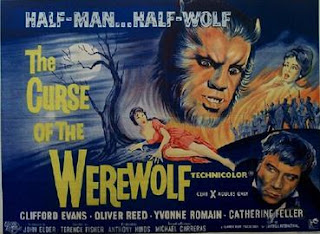 Curse of the Werewolf (1961)
As I admitted last week, the werewolf has been my favorite monster since I was a kid. Maybe it's the idea of a “sometimes-monster.” The sometimes good, sometimes bad of the creature is easier to relate to than the always-evil vampire and not-very-bright killer zombies. Sadly, there aren't nearly as many werewolf films as vampire and zombie films, and the percentage of quality horror films is very slight. In other words, there aren’t many good werewolf films.

By an amazing historical fluke, three of the best werewolf films ever made premiered in the same year. The Howling, An American Werewolf in London, and Wolfen (arguably not a werewolf film, but a film about really smart, dangerous wolves) all premiered in 1981, and all of them are excellent films. But since all three are fairly church- and clergy-free, they do us no good here.

Unlike vampire films (the critters are stopped by a cross, after all), most werewolf films don’t have an overtly spiritual focus. Last week we had arguably the best werewolf film ever made, and it had a church and a pastor. We have churches in this week’s werewolf double feature but the quality of the films is… not great. Doesn’t matter, not what we’re here for.

Curse of the Werewolf was produced in 1961 by Hammer Studios. Hammer was an English company that made much of its fortune by taking famous Hollywood properties not under copyright, primarily Universal’s monster movies, and remaking them -- adding some things that couldn’t be included in the original productions like color, cleavage, and gore. They reinvented Dracula, Frankenstein, the Mummy, and eventually got around to the Werewolf.

Set in 18th Century Spain, Curse of the Werewolf didn’t stick with the Universal mythology of lycanthropy. Instead of becoming a werewolf by being bitten by another werewolf, Leon is a werewolf because he was an illegitimate child born on Christmas Day. (Maybe I should have saved this film for December.) A kind older couple agrees to adopt Leon and take him in to be the local Catholic Church to be baptized. As the couple approaches the baptismal, the sky outside becomes stormy. Lightning flashes and thunder crashes. And then the holy water in the baptismal boils over, and for a fleeting moment, the image of a devil is seen in the water. This is, in the world of horror movies, not a good sign. But the baby is baptized and given the name “Leon.”

We next see Leon as a young man (played by Oliver Reed). There is a hunting incident, and something not quite human makes an appearance. Most werewolf films have a prolonged period when everyone argues whether a killing was the work of a man or an animal, but in this film a priest quickly assesses the situation. He knows there’s a werewolf.

The priest talks with Leon’s adopted father about what he thinks is happening. Just as the origin of the werewolf is unique to this film, the whole werewolf mythos differs. The priest explains a werewolf is caused by a roving spirit that enters the body. It is a form a possession where the spirit of an animal fights within a person against the spirit of a man. He explains that only love can cure (and save) a werewolf.

As in most werewolf legends, the werewolf turns on the night of the full moon. The bishop comes up with the sensible plan to chain Leon the werewolf in the monastery to keep everyone safe, but instead, Leon is put in the local jail. As a werewolf he is able to escape the jail and run wild through the town. And he is not cured by love, but instead by a silver bullet made from a melted down crucifix.
If only people had listened to the priests in this film. 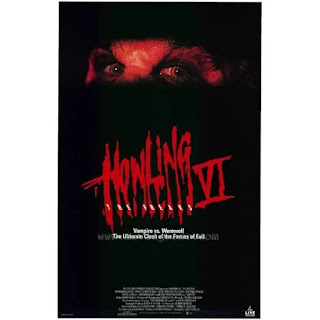 As I mentioned earlier, The Howling is a great werewolf film (though it certainly earns its R rating). Few first sequels are as good as the original film, and many series have a marked drop by movie number three. So it's not a surprise that when Howling VI: The Freaks is not a good film. But it does have a church.

Ian (Brendan Hughes), comes to a small town as a stranger, and the town sheriff threatens to arrest him for vagrancy. A man named Dewey (Jered Barclay) says Ian can stay with him if he helps repair Dewey's “building.” That building is an old church.

The church is run down. The stained glass doesn’t have very religious imagery (well, there are grapes), but Ian does refurbish and mount a cross. A sign advertises Sunday worship at 11:00 am and Wednesday night prayer meetings. Dewey appreciates Ian’s hard work and tries to figure out what is troubling the young man, but Ian responds, “You’re a nice man, Dewey, but don’t try to play preacher man with me.”

Ian’s trouble is that he is a werewolf. And Dewey isn’t the only person who offers him sanctuary. A man named Harker has come to town with a freak show. He tries to convince Ian to be one of his displays and when Ian refuses, Harker abducts him. Turns out, Harker is a vampire.

Dewey is willing to go to battle to rescue Ian and the other “freaks” imprisoned by the traveling show. He prays for a blessing on silver bullets (“Dear Lord, Who can defeat all evil...”) and is serious about fighting. “There’s no reason to be polite. You see the devil, you shoot him.”

Of course, if we were rating the quality of these films with a traditional “star” system, we would be looking at a very dark night. But here at Movie Churches, we rate the churches and clergy in films. If werewolves were real, I’d be happy to have clergy from either of these films on my side. So the churches and clergy of Curse of the Werewolf and Howling VI: The Freaks earn our coveted 4 Steeple Movie Church Rating.

Posted by churchandstates at 10:51 PM