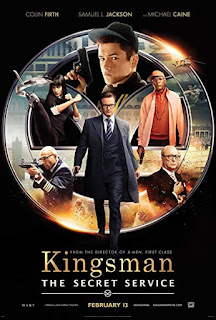 (I'm reposting this Movie Churches review because the scene featured in this post has recently come up in the news as it has been re-edited with President Trump as the shooter. Controversy has ensued.)

For quite a few years now, Hollywood has had a villain shortage. I’m not saying there aren’t bad guys in movies anymore. But the screenwriter's challenge has been to find villainous groups.

Back in the day, Westerns had Indians (no, they were never called Native Americans then) as the bad guys. So there could be action sequences where dozens of Indians were shot off their horses by our heroes, the Cowboys, with reasonable assurance the audiences would cheer their deaths. But now that we think of them as Native Americans (and, you know, people), cheering their deaths just doesn’t seem like the American thing to do.

The Nazis made great villains, from a little before World War II to well beyond. When the Dirty Dozen (made in 1967) attacked a ballroom full of Nazis, no one was too concerned that some of them were pretty women in gowns. As Indiana Jones said, “Nazis, I hate those guys.” But Nazis now are a little pathetic; sure they’re villains in The Blues Brothers, but comic, mockable villains.

Communists provided fine villains throughout the Cold War, but that’s been done for decades now. Terrorists would be the go-to villains, but since the terrorists we’re concerned with are Islamic terrorists, that causes a problem. Hollywood has a concern about not portraying all Muslims as bomb-happy; a reasonable concern.

So what does a screenwriter do when they want to have a set-piece with a lot of human carnage that won’t upset audiences unduly? The makers of the spy film Kingsman: The Secret Service found their solution in the church.

To talk about the movie church in this film, we need to give away major plot points. This shouldn’t greatly disturb some of our readers because Kingsman: The Secret Service is hardly a film that will be used on a church’s family movie night. There is extreme violence and gore in the film, but some of it is animated and stylized to show it’s all in good fun. There is a crude gag used at the end of the film that might lead James Bond himself use the word "misogynist."

But as always, we aren’t here to review the film, but the church and clergy in the film.

As I said, the filmmakers had a problem. The arch-villain in the film, Valentine, has developed technology to make people viciously attack and kill each other. He must find a group of people to test the tech on. Since he sees himself as a sweetheart (played by Sam L. Jackson) he’s not going to test it in a kindergarten class.

So we are introduced to the South Glade Mission Church. This fictional church is obviously based on the sadly real Westboro Baptist Church, which gained fame by protesting at military funerals with the twisted rationale that the government-supported homosexuality.

In the film, South Glade Mission Church is preaching against Jews (the preacher uses this word), workers in the sex industry (he uses a different word), Catholics (he uses this word), gays, and African Americans (alternate words for the latter two). The super spy, Galahad, played by Colin Firth attends this service as part of his investigation.

During the service, Valentine activates his device and everyone in the congregation attacks one another. Apparently, knives and even guns are brought to this church only a little less commonly than Bibles. Bloody chaos ensues, but since Galahad has more experience at hand-to-hand combat than the average usher, he eventually stands alone over a sanctuary full of corpses.

It seems that filmmakers are saying, in this world full of division, isn’t this a group we can all hate together? In the past, there have certainly been individual clerical villains (Robert Mitchum in Night of the Hunter comes to mind), but now apparently whole congregations can be the bad guys.

If this hateful congregation, far from the teachings of Jesus, is the image anyone has of the church of Christ, then it seems Christians have some P.R. to do.

(Bonus clergy bit in the film. One can see a tabloid with the headline, “Naughty Nun Touched MyBum.” And theological bonus, Valentine argues that he isn’t a villain for wanting to cull the world’s population any more than Noah or God in the story of the Flood.)

When I posted this years ago, I wasn't using the Church Steeple Ratings, but we are certainly talking a One Steeple Church here on our 1 - 4 rating system.

Posted by churchandstates at 8:42 AM