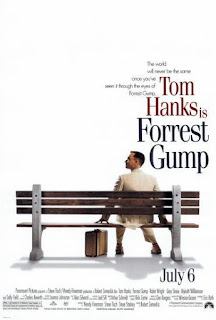 The central figure of this 1994 Best Picture Winner, Forrest Gump, is many things. He is a football star, a sloganeer, a table tennis champion, a fisherman, an entrepreneur, a multimillionaire, by most definitions a moron, and most importantly for this month, a veteran. Because we in the United States celebrate Veterans Day this month (on November 11th), all month we at Movie Churches will be looking at films that feature veterans, soldiers, churches, and/or clergy.

Based on the novel of the same name by Winston Groom, Forrest Gump also won Oscars for director Robert Zemeckis, screenwriter Eric Roth, and the film’s star, Tom Hanks. It was a huge box office success and received generally favorable reviews. It's on the American Film Institute’s list of Best American Films. Over the years, it has become a subject of debate, with some disgruntled movie buffs complaining about the film beating Pulp Fiction and The Shawshank Redemption. Still, there has also been a great deal of debate over the politics of the film.

Throughout the film, Forrest the simpleton seems to be at the heart of every tumultuous event that takes place in America in the 1960s and 1970s. He follows his girlfriend Jenny (Robin Wright) to a rally in the National Mall protesting the Vietnam war. The anti-war protest leaders are presented as petty, squabbling, and scheming, and many have taken the film to be a critique of the political left.

Forrest epitomizes many conservative values -- like faith, love of country, and love of family -- that were being questioned in the era depicted in the film. Did the filmmakers intended to spoof those values by embodying the values in a fool, or was the fool used to show up the emptiness of the values of the protest movements of the time?

Fortunately, here at Movie Churches, we don’t need to answer such questions. We just need to look at how churches and clergy are depicted in the film, but it a long, circuitous route that eventually takes Forrest to church.

When Forrest is drafted into the army, he meets another soldier, Bubba, who is, um, slow. Bubba tells Forrest about his dream of owning a shrimping boat. Forrest and Bubba are shipped overseas to serve in Vietnam. During one devastating battle, almost all of the men in Forrest’s unit are killed or injured, and Forrest carries every man, dead or alive, off the field (reminiscent of the real-life WWII exploits of Desmond Doss depicted in the film Hacksaw Ridge.)

Bubba dies in that battle, but Forrest does rescue his commanding officer, Lieutenant Dan Taylor (Gary Sinise). Lieutenant Dan is not happy about being rescued because he lost his legs. “I should have died in the jungle. I was supposed to die in the field with honor, but you cheated me. This was not supposed to happen," he tells Forrest.

While still in the service, Forrest becomes an expert in table tennis, earning fame playing against the Chinese National Team. After he's discharged from the military, an endorsement of ping pong paddles makes him enough money to buy a shrimping boat in Bubba’s honor.

Lieutenant Dan fulfills his promise to Forrest to work on the shrimping boat, but their initial outings are not successful. Dan mocks Forrest for his optimism and says the only hope he has is supernatural, “Maybe you should just pray for shrimp.”

Forrest takes this advice seriously and begins attending an African American congregation, the Foursquare Baptist Church. It has a lively choir singing Pray that I’m Homeward Bound. Forrest narrates, “So I went to church every Sunday. Lt. Dan came sometimes too, though I think he left the praying up to me.” (Dan seems drunk in the back pew of the church.) The sign in front of the church reads, 10:30 AM Sunday School and 12:30 service. (That is one late service.)

In spite of going to church and praying, the fishing doesn’t get better. Dan again mocks Forrest, “Where the hell’s this God of yours?”

Again we hear Forrest’s narration, “It’s funny Lt. Dan said that, because just then, God showed up.” Dan curses God, yelling, “It’s time for a showdown!” God shows up in the form of Hurricane Carmen while Forrest and Dan are at sea.

But what is a disaster for most, is a blessing for Forrest. His boat, The Jenny, is the only shrimping boat to survive the storm. His business prospers, and he and Dan become very rich men. They are even featured on the cover of Fortune Magazine. Forrest’s choir sums things up with their song, There Will Be a Great Bounty.

Lieutenant Dan becomes a changed man, thanking Forrest for saving his life. Forrest says Dan “never actually said so, but I think he made his peace with God.”

Forrest tells about how he uses his fortune. He says, “Now Mama said there’s only so much fortune a man really needs, and the rest is for showing off. So I gave a whole bunch to the Foursquare Gospel Church.” And a very nice building project is seen in a montage as the choir sings, “I’ve got a new hope.”

The church seems to a good one: it changes the lives of two veterans. I’m giving it our highest Movie Churches rating of Four Steeples.

Posted by churchandstates at 10:23 PM