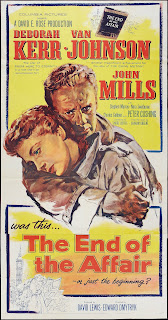 The End of the Affair (1955 and 1999)
Literary Month concludes with a religious novel featuring tawdry sex. Well, perhaps tawdry isn't a fair term at all because I’m sure the characters, a married woman and her unmarried love, believe theirs was a singular love, beautiful and not at all wrong. Graham Greene’s The End of the Affair, published in 1951, has been adapted twice for the screen, in 1955 and 1999.

Considering when they were made, it’s not surprising there are a number of differences between the films. The first is in black and white, and the second is in color. The first starred an American (Van Johnson) as novelist Maurice Bendrix, and made the character a Yank, while the second starred Ralph Fiennes as a British writer (also named Maurice Bendrix). And the second film has explicit sex scenes while the 1955 film does not. (Both films were made in England, so while the first film didn’t need to follow the American Production code, the British code could be even more strict.)

Of course, these differences don’t matter much to us here at Movie Churches. The differences in how the films handle churches and clergy matter here.

The novel and the film adaptations all share the same basic plot. During World War 2, a novelist in London begins an affair with Sarah, the wife of Henry, a British bureaucrat. (Greene admitted the story was based on an affair of his own.) As Maurice and Sarah meet during an air raid, the apartment building is bombed. Sarah is concerned that Maurice is dead and prays, promising God that if Maurice does live, she will break off the affair. Maurice is uninjured, and Sarah breaks up with him.

Time passes and Maurice doesn’t know why Sarah ended the relationship. He suspects there may be another man, so he goes to Henry (Peter Cushing in 1955, Stephen Rea in 1999) and says he will be hiring a private detective to follow Sarah (Deborah Kerr in 1955, Julianne Moore in 1999). Maurice (pronounced "Morris" in case you wondered) tells Henry he will pretend to be Sarah’s lover to save Henry from the embarrassment of the situation. A detective named Pakis, who brings his young son along on his jobs, follows Sarah. This is where the film plots diverge from one another.
The two Sarahs in the two films follow two very different men. 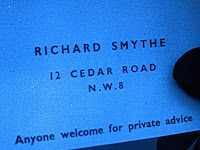 In the 1955 film, Sarah hears a “preacher” in a park proclaiming a message of atheism. He offers counseling to help people overcome the hindrances of religion. Sarah goes to him, hoping he will free her from her promise to give up Maurice. Pakis reports to Maurice that Sarah is seeing a man. This man, Richard Smythe (Michael Goodliffe), fails to persuade Sarah that God doesn’t exist. In fact, his hate for God is so strong (half his face is covered by a birthmark) that Sarah says he convinced her that God exists. How could he hate someone he didn't believe exists?

Sadly, Sarah coughs in the film. We all know that in old movies, coughs indicate a fatal illness (usually, but not always, consumption). Sarah goes to a priest who refuses to give her any easy answers. Sarah comes to embrace her faith in God. And dies offscreen. 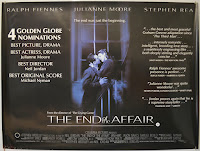 Maurice meets Sarah’s mother, who tells him that Sarah was baptized into the Catholic church when she was two, but her father was Jewish so they couldn’t practice their faith. Maurice comes, reluctantly, to faith in God.

In the 1999 version, Parkis the detective finds Sarah has been seeing a different Richard Smythe (Jason Isaacs). He’s a priest who lives with his sister. Believing he has been having an affair with Sarah, Maurice confronts the priest, “Aren’t you bound by the vows of chastity?”

Maurice is mistaken. Sarah has been receiving spiritual counsel, not physical affection from the priest. She comes to have faith in God. In this version, it is Sarah who tells Maurice that she was baptized in the Catholic Church at the age of two. She also coughs in this film, obviously signaling a fatal illness.

Because of her illness, Sarah is confined to her home with Henry, but Henry, learning of the affair, invites Maurice to live with them and help care for Sarah. Though neither Henry nor Sarah know it, Maurice bars Father Smythe from seeing Sarah. After Sarah dies, Maurice convinces Henry to cremate Sarah rather than have a Catholic funeral.

However, after her death, Maurice learns more about Sarah. The detective’s young son Lance has a deforming birthmark. Lance follows Sarah as his father's assistant but falls asleep. Sarah, finding him asleep, kisses his birthmark, which vanishes within weeks. In this film also, Maurice comes grudgingly to faith in God.

Both films lead one to think that Maurice eventually believes in God, but in the novel, Maurice believes God exists but refuses to have a relationship with Him because Maurice now believes that love is too painful.

In both films, Sarah goes to a church to wrestle with her painful promise. In both films, she receives kind but firm counsel from a priest. So we’re giving the Church, Father Crompton (Stephen Murray) from the 1955 version, and Father Smythe from the 1999 version our highest rating of Four Steeples.
Graham Greene Bonus: This month we've been focusing on film adaptations of novels, but while the focus is on Greene, I'd like to recommend Went the Day Well? based on his short story, "The Lieutenant Died Last." (Both of those titles are bad, but I believe the film title is worse). Made in 1942, it imagines German soldiers emulating Brits and invading a small English village. It is well worth seeking out. Most of the villagers are confined in the local church. The priest takes a stand against the Nazis that would earn him a Four Steeple Movie Churches rating.
Posted by churchandstates at 9:25 PM