The Quiet Man (1952)
Should a clergyperson be part of the community or aloof from it? Should a priest be a regular guy, going out with the crowd for a beer, or cloistered away? Should he be holy and set apart or should the priest in a small Irish town join a scheme to convince a belligerent brother to allow his sister to marry the new American in town, even if the plan involves deception?

Okay, that last question is a little more specific and probably only applies to the plot of The Quiet Man, but the other questions also apply to the clergymen in the film. (And to all other clergymen. And clergywomen. But there are certainly no clergywomen in this film set in a small, Irish village in the 1920’s.)

The Quiet Man is much beloved (it’s also one of my favorites), featuring Oscar-winning direction by John Ford and Winton Hoch’s cinematography of the very green Irish locations. In 2013, the film was chosen by Congress to be on the National Film Registry. John Wayne and Maureen O’Hara star, one of the great screen couples (comparable to Bogart and Bacall, Hepburn and Tracy, and Astaire and Rogers). Many people -- like my wife, Mindy -- have seen the film’s classic scene of Wayne and O’Hara’s first kiss without seeing the film because of its use in E.T. 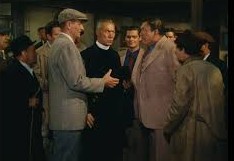 The Quiet Man tells the story of an American boxer, Sean Thornton (Wayne), who returns to his ancestral home in Inisfree, Ireland. He falls in love with a local woman, Mary Kate Danaher (O’Hara). Mary Kate’s brother and guardian, Squire “Red” Danaher (Victor McLaglen), opposes the match. The whole town conspires to convince him to approve of the marriage, which is where we come to the clerical moral quandary. And the clergy and their moral quandaries interest us here at Movie Churches.

The town character, Michaleen Flynn (Barry Fitzgerald), convinces everyone in town to deceive Red into thinking that the only chance he has to marry the town’s richest widow, Sarah Tillane (Mildred Natwick), is to marry off his sister as well. When Red approaches the widow at his sister’s wedding, he discovers it was a ruse. He then confronts Father Peter Lonergan (Ward Bond), the town priest in front of the town. “All lied as part of the conspiracy. It’s bad enough for you people, but my own priest!”

Red may be presented as the villain in the film, and he doesn’t treat his sister well, but he has a point here. Shouldn’t a parishioner expect his priest to oppose deception, or at least not participate in it? And that isn’t the priest’s only deception in the film. 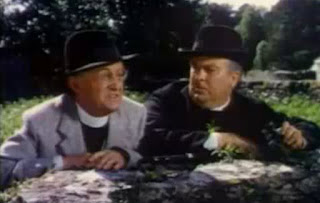 Another prominent clergyman in town, is a married Anglican priest named Cyril Playfair (Arthur Shields) whose worship services have only two or three attendees (and that includes his wife, Elizabeth.) His bishop is coming to observe his ministry, and Playfair fears he’ll be removed from his parish. Father Lonergan asks his parishioners to pretend to be Playfair’s, and even covers his own clerical collar to pretend to be an Anglican member of the congregation.

Both of these acts of deception seem to be done by Father Lonergan with the best of motives, and he seems to be following the lead of the town. But he isn’t making a principled stand of integrity. He certainly isn’t living out the words of Jesus, “Let your ‘yes’ be yes and your ‘no’ be no.”

When Thornton and Red engage in a rather epic fist fight, one of Lonegan’s young assistants suggests they should step in and stop the fight.

“Oh, we should,” Lonegan agrees, but he does nothing because he knows the whole town has been longing for the battle and is enjoying the spectacle. (Arguably, that’s a better reaction than the example set by the Bishop and Rev. Playfair, who make a bet on the fight.)

There are good things to be said about the clergy in the film. Lonergan has served the town faithfully. He notes that he baptized both Sean and Mary Kate as infants in the same chapel where he married them. 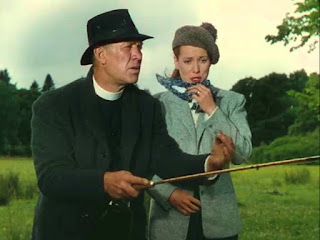 Both Lonergan and Playfair serve as counselors in the film. Mary Kate interrupts Father Lonergan’s fishing to ask for marital advice (though the Father doesn’t actually stop fishing to talk to her). On her request, they speak in Irish Gaelic, presumably because she feels most comfortable in that language. I noticed, though, that he never refers to Scripture or even the teaching of the church -- but neither does Playfair when Sean comes to him for marital advice. (Sean goes to Playfair partly because he’s the only one in the town who knows Sean’s history as a boxer. The Reverend is a fan of sports and games, having been a boxer himself and a devotee of tiddlywinks.)

And though Red Danaher acts in ways that the entire community recognizes as harmful to his sister, the priest never confronts him.

On the other hand, the priest joins the men in the tavern for drinks and seems open to fishing with them. There is something to be said for that kind of sociability. Father Lonergan also provides the film’s narration, but because of their decisions to conform rather than be holy, we’re knocking off a Steeple and giving the clergy of this film a Three Steeple rating.
Posted by churchandstates at 7:27 AM