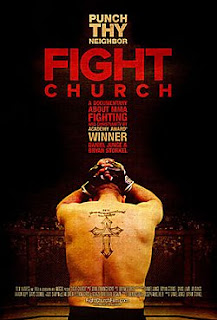 Fight Church (2014)
It’s really too bad I can’t write about the movie Fight Church here, but this blog is about fictional churches, and Fight Church is a documentary. It’d be especially fun to write about it because it’d be a great introduction to Fight Church month -- movies that feature boxers and wrestlers and such. We’ve covered boxers (Million Dollar Baby and The Leather Saint) and wrestlers (Nacho Libre) already, but Hollywood has made many films about fights and fighters, priests are often at ringside in these movies.

Some of the films we’ll look at this month are based on true stories, but don’t worry. They stray very far from the truth. So, as I was saying, it’s really a shame I can’t write about 2014’s Fight Church. As the film notes, over 700 churches in the United States have an MMA (mixed martial arts) ministry.

Paul Burress and Preston Hocker, two pastors featured in the documentary, have a number of things in common, including wrestling in high school and having fathers who were pastors. After high school, both got into Mixed Martial Arts. (If you don’t know, MMA is a full-contact sport combining boxing, wrestling, kicking, and almost every other form of physical attack except eye gouging.) As adults (and pastors), both have MMA ministries in their churches. Both argue that since people (particularly men) are interested in MMA, the sport is a way to reach people with the Gospel.

Not everyone thinks this is a good idea. Father John Duffell is a Roman Catholic priest who believes Mixed Martial Arts can’t be reconciled with the teachings of Jesus. Scott "Bam Bam" Sullivan, a former MMA fighter and instructor went on to study philosophy and Christian apologetics, and he came to believe that punching people in the face is contrary to the call of Christ to turn the other cheek.

Pastor John Renken, on the other hand, is annoyed when people bring up the “turn the other cheek” thing. Renken says that the Bible never calls us to be doormats. (He’s right, I checked. “Doormat” never appears in Scripture.) Renken never explains what he thinks Jesus was teaching, he just assures us it’s okay to respond physically if someone verbally disrespects you or your spouse.

The film even captures a big pastor vs. pastor MMA match, in which an arm is almost broken. Directors Daniel Junge (Oscar winner for the short documentary Saving Face) and Bryan Storkel (director of the documentary Holy Rollers: The True Story of Card Counting Christians) not only do a great job of presenting this interesting subculture of the church, but examine an age-old debate on the topic of violence in the Christian faith.

You really should seek out this film (available with an Amazon Prime subscription) but we’re not going to write about it here. As I said, we don’t do documentaries.
Posted by churchandstates at 10:16 PM