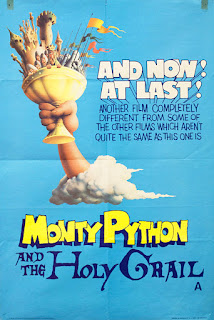 Monty Python and the Holy Grail (1975)
People don’t take comedy seriously enough. When someone’s offended by the material in a comedy, someone else is sure to say, “Don’t take it so seriously, it’s just a joke.”

Why even bother looking at how comedies present the church or clergy, if it was all in fun? Don’t you get it?

This week and next, we’ll be looking at two comedies that satirize religion. Even though both were made decades ago, they’re still watched. People are still quoting Monty Python and the Holy Grail (1975) and The History the World Part 1 while Monsignor (1982), The Runner Stumbles (1979), and even the slightly more recent Priest (1994) -- dramas with hard hitting takes on the church -- are long forgotten. 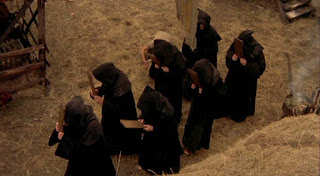 Those comedies have rather interesting takes on the church. Monty Python and the Holy Grail also happens to be one of the funniest films ever made. Monty Python started off as sketch comedy series on the BBC first airing in 1969. The cast (Graham Chapman, John Cleese, Eric Idle, Terry Jones, Michael Palin, and a cartoonist, Terry Gilliam) decided to parody the story of King Arthur. Any story from that time, the middle ages, would have to deal with religion.

The film opens with very funny opening credits that include moose. We then see , then a title card reads, England 932 A.D. We then see King Arthur pretending to ride a horse (apparently the budget couldn’t cover actual horses). God appears to Arthur and tells him to search for the Holy Grail (Jesus’ cup from the Last Supper). God is drawn by Terry Gilliam as the grouchy, bearded head of a King. It was not a flattering portrayal; mean, narcissistic, and brutal. 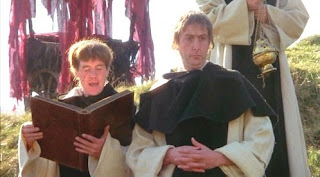 The first clergy we see in the film is a parade of monks who smack themselves on their heads with boards as they chant, “Pies lesu Domine, Dona eis requiem” (Latin translated roughly as “Pious Lord, give them rest”). There were monks and other “holy men” during the middle ages that hurt themselves; wore hairshirts and whipped themselves. Their pain was intended to pay for the sin for themselves and others -- which is really bad theology, of course. On the cross, Jesus paid it all. As Isaiah 53:3, says, by His stripes we are healed. But watching those monks hit themselves on the head is funny.

It’s also interesting where clergy aren’t seen in the film. When people are called to “bring out your dead,” no clergy is around. When a witch is on trial, about to be executed, there is no clergy present. When there is a wedding in the film, a priest is part of things, but we don’t hear much from him. (Those who think the Red Wedding was a new idea in Game of Thrones haven’t seen this movie. Though it is much funnier in this film.)

The most prominent member of the clergy in Holy Grail is a firearms expert, Brother Maynard, who carries the sacred relic of the Holy Hand Grenade of Antioch. In order to fight a deadly beast, a bunny (yes, a bunny), he is called in.

He consults the book of Armaments, chapter 2 verses 9 - 21, “And St. Attila raised the hand grenade up on high saying, ‘O Lord, bless this thy hand grenade that with it thou mayest blow thine enemies to tiny bits in Thy Mercy. And the Lord did grin and the people did feast upon the lambs and sloths and carp and anchovies and orangutans and breakfast cereals and fruit bats… And the Lord spake saying, ‘First shalt thou take out the holy pin, then shalt thou count to three, no more, no less. Three shalt be the number thou shalt count, and the number of the counting shall be three. Four shalt thou not count, neither count thou two, excepting that thou then proceed to three. Five is right out. Once the number three, being the third number, be reached, then lobbest thou thy Holy Hand Grenade of Antioch towards thy foe, who, being naughty in My sight, shall snuff it. Amen.”

Sorry for the very long quote. But one gets the feeling that some of the writers (who were also the cast) had to sit through long Old Testament readings in chapel and wanted to convey the tedium they felt. And to be fair, it is the expertise of the priest that brings about the destruction of the killer beast.

Still, a rating of two steeples out of four is the best I can do for the clergy in this comedy classic. (Next week we’ll look at that other comic visit to the Middle Ages from the very funny Mel Brooks.)
Posted by churchandstates at 7:29 AM