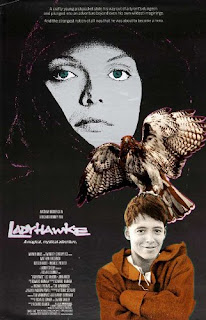 Ladyhawke (1985)
Some things in this film call for a willing suspension of disbelief. A man turns into a wolf at night. A woman turns into a hawk by day. Centuries before the science of dentistry was common, everyone has straight, white teeth. Matthew Broderick is a streetwise thief.

Here at Movie Churches, though, the biggest stretch may be Ladyhawke’s presentation of the medieval church.
The film is set in 13th century … um… Europe? in everybody’s favorite capital, Aquila (not coincidentally, Latin for ‘eagle’). There doesn’t seem to be any secular government, power, or authority of any kind. “The Bishop” seems to be the sole authority in this country (Region? Fiefdom? Parish?) The Bishop has soldiers under his command, and the prison is located in the church. Mention is made of the Vatican (the good knight, Navarre, talks of his family defending the Holy See), but we never see anyone who has authority over the Bishop. 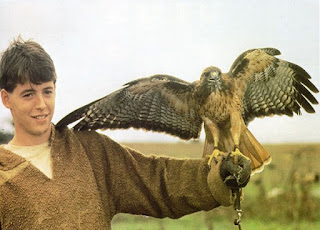 The film opens with prisoners awaiting execution in cells below a cathedral where a Mass is taking place. There are families and monks at the service, including a small child. Masses in this film are different than any I’ve seen in the contemporary Catholic Church. There is no sign of the Bread or the Cup, which is kind of, you know, what the Mass is all about. Instead, the service seems to consist of monks marching around chanting. As the service proceeds, a prison break is taking place downstairs. The thief, Phillipe Gaston the Mouse (Matthew Broderick), escapes through the secret passages of the prison and comes up to the floor of the church, where he is seen by a little girl. He manages to make his way outside. 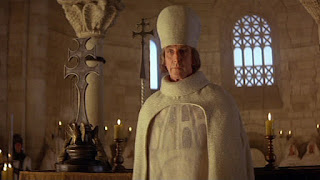 The Captain of the Guard brings the news to the Bishop, “Your Grace, someone has escaped from the dungeon. But to remain free would take a miracle.”

The Bishop (John Wood) responds, “I believe in miracles; it’s part of my job.”

The Captain tries to assure the Bishop the escape of one petty thief is nothing to worry about, but the Bishop responds, “A storm begins with a single breeze; so a rebellion begins with a single act.” (The Bishop is upset that the people are not paying their “taxes” to the church, just because they don’t have anything to pay their taxes with.) So the Bishop demands the apprehension of the Mouse. 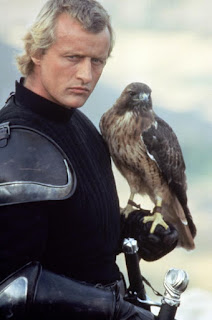 As the Mouse attempts to elude the Guard, he carries on a conversation with God, promising to amend his ways if God allows him to escape. And aid comes from an unexpected source, in the form of Navarre the Knight (Rutger Hauer), the former Captain of the Guard. Navarre is a personal enemy of the Bishop, and he’s accompanied by a hawk that occasionally rests on his shoulder, flies free, and attacks the Bishop’s soldiers when needed.

When a soldier shoots the hawk with an arrow, Navarre is distraught. He demands that Gaston take the hawk to a monastery where Imperious (Leo McKern), who seems to be a mad monk, lives. Gaston does, and the monk offers to cook the hawk for them to share a meal. When he learns the hawk came from Navarre, though, he carefully cares for the bird, and when the sun sets, the wounded hawk transforms into a wounded woman (Michelle Pfeiffer). Gaston demands an explanation from Imperious.

Imperious tells the story of a beautiful woman, Isabeau, loved by the Bishop (I thought he took vows of chastity, but that may of been one of his lesser problems). When the Bishop learned that Isabeau married the Captain of his guard, he was outraged. As Imperious tells the story, “The Bishop, when mad, lost his sanctity and his reason. If he could not have her, no man would. He called on the powers of darkness to damn the lovers and struck a dreadful bargain with the evil one.”

The Bishop cursed the knight to being a wolf during the night and the woman to being a hawk during the day. They would never be together in human form. The knight wants revenge on the Bishop, but the mad monk has an idea about how the curse can be reversed. 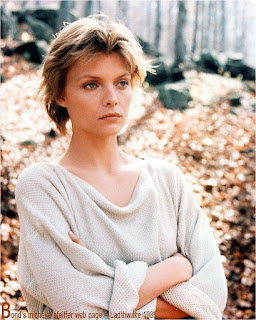 Of course, at Movie Churches we’re not here to evaluate films, but the clergy and church in films. If I was talking about this Richard Donner directed film, I would have to point out that it features three of the more interesting stars of the ‘80’s. Rutger Hauer may not have ever become a huge star, but Roy Batty, the replicant from Blade Runner, is one of my favorite characters in the movies. The young Matthew Broderick from War Games is topped only by the young John Cusack as one of the most appealing of movie’s youths. And Michelle Pfeiffer… Well, she is always stunningly beautiful and yet down to earth, intelligent, and charming. And the film is great fun.

But that’s not what we’re here to talk about. There is the positive image of Imperious, the mad monk, who helps the knight and lady overcome their curse. (A hint about how he does this: a solar eclipse -- and if we learned anything from A Connecticut Yankee in King Arthur’s Court, it’s that solar eclipses happened frequently in the Middle Ages.)

But any positives from Imperious are wiped away by the evil Bishop. He lusts after a young woman and is willing to go to any lengths to keep anyone else from having her, whether that means murder or a deal with the devil. It is made even more nauseating because the Bishop insists that the things he does are all part of the will of God. He claims that God speaks to him (Gaston is puzzled by this, “I talk to God and he’s never mentioned you.”) The Bishop earns our lowest Movie Church rating of One Steeple.

It’s tempting to say the Bishop is over the top, but I read the news about the sexual abuse and the coverup of that abuse in the Catholic Church. The Bishop of Ladyhawke’s schemes seem almost quaint. One can cheer for the downfall of the Bishop in Ladyhawke while taking encouragement from Gaston’s active faith. The actions of real Bishops in the world has destroyed the faith of many, and will do more.

In the movies, at least in ‘80’s films, a happy ending was a sure thing. I have faith that the God of Scripture has promised His justice is even more sure.
Posted by churchandstates at 8:34 AM