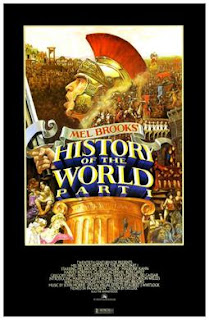 History of the World Part I (1981)
There’s there's a Mark Twain quote, "Humor is tragedy plus time,” that Mel Brooks quoted when talking about the Spanish Inquisition sequence from his film History of the World Part I. Some might argue that people being tortured for their religious convictions is nothing to laugh at, but this time period has been used for comedy before. Last week, we looked at Monty Python and the Holy Grail, and on the Pythons’ TV show (Monty Python’s Flying Circus), the group did a skit about the Spanish Inquisition that no one expected.


History of the World Part I, written, directed, and starring Mel Brooks, is not a comprehensive view of humankind. There are about half a dozen skits based on different eras, and religion gets a number of jibes. One sequence set in old Rome has Jesus (John Hurt) at the last supper at the same time that Christians are being thrown to the lions -- so the history isn’t exactly precise. In this same section, a standup comic gives his routine before the Emperor. He says, “Have you heard about this new sect, the Christians? They are so poor…”

The audience calls out, “How poor are they?”

“They are so poor, they only have one God!”

But though that segment has jokes about religion, the church or clergy doesn’t really show up until the segment on the Spanish Inquisition (set in the 1400’s, thus qualifying the film for Middle Ages Month). A title card reads: 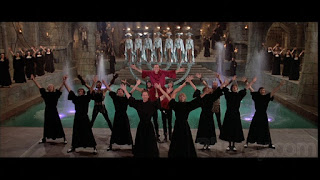 Brooks plays Tomas de Torquemada, a Castilian Dominican friar, who began as a regular inquisitor in 1482, but was appointed by the Pope as the Grand Inquisitor the next year and served until his death in 1498. Both Jews and Muslims were “encouraged” to convert to Christianity. All manners of persuasion were used to encourage conversion, including counseling, lecturing, and, most infamously, torture.

We see the Iron Maiden being used, along with water torture (Jackie Mason is among the victims), and they add another tool of persuasion, song and dance. The whole sequence is donein the style of a Busby Berkeley musical, with lyrics like these:

“Embrace the True Church now or face the fires of hell...
Convert the Jews, make an offer they can’t refuse...
It’s better than lose a skullcap than a skull…
We know you’re wishing we’d go away, but the Inquisition is here to stay.”

Those chained to the wall can’t fully participate in the dance, but they do what they can. We also see nuns strip down to swimsuits for the big pool numbers. Jews are thrown in the pool, but they drown.

Someone asks the Inquisitor if there were any converts today. “Nah, not a one,” he answers.

Initially, governments, not the Church, were persecuting the Jews and Muslims. The Catholic Church believed Muslims and Jews were being treated unfairly and believed the Church would be more accurate arbiters of faith than Kings. They did treat Jews and Muslims better than the civil governments did, it’s just that by our standards, both were horrors.

I’ve linked to where you can see this argument made. But as for the way the Catholic Church and Friar Torquemada are presented in this movie, they receive our lowest Movie Church score of One Steeple.

Posted by churchandstates at 7:35 AM