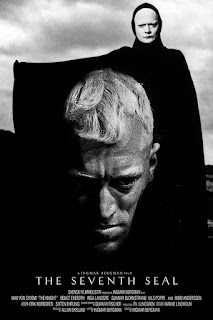 The Seventh Seal (1957)
When people think of art films -- if they think anymore these days of “Art Films”-- they may well think of Ingmar Bergman’s The Seventh Seal as the quintessential art film. It’s Swedish, it’s black and white, it uses a lot of symbolism, and it’s philosophically existential, with a literary reference for a title (taken from the Book of Revelation, chapter 8). The film brought Bergman to prominence outside of Sweden, and he is now regarded as one of the greatest of all filmmakers. The film isn’t a stale old classic. It has grim aspects, but it also has wonderful actors playing appealing characters, and there is even humor to be found in the film.

The Seventh Seal has become a subject of parody through the years, so I’m sure many people are more familiar with the parodies than the original. In Bill and Ted’s Bogus Journey, Death challenges the dim boys to a game -- with their souls at stake -- and they play Battleship, Clue and Twister. The scene’s a spoof of the famous chess scene in The Seventh Seal where the Knight, Antonius Block (Max von Sydow), challenges Death to a game of chess.

In one scene toward the end of Monty Python’s The Meaning of LIfe, Death comes to a dinner party, clearly paying homage to one of the final scenes of The Seventh Seal. But more to the purpose for us here at Movie Churches, a scene in Monty Python and the Holy Grail (recently reviewed here) clearly echoes a scene from The Seventh Seal. Both films have processions of self-flagellating monks. 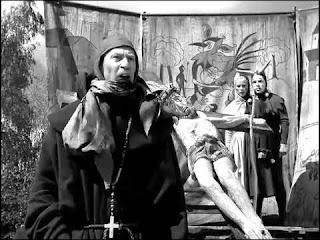 In Holy Grail the monks were hitting themselves on the head with boards. In The Seventh Seal, monks march with peasants (a man on crutches among them); as they walk, some whip others’ backs. There is wailing, and someone is wearing a crown of thorns. They also carry a large crucifix before them.

One of the monks stops to preach to the crowd, “You shall all perish of the Black Death! Don’t you know you’re going to die!”

Not the most encouraging of sermons.

He prays, “Be merciful for the sake of Jesus Christ” He implies that purification through fire might not be a bad idea, “Better to die pure, than face hell.” 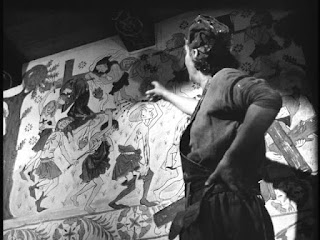 It is understandable that at the time of plague, the Church would discuss death, but in this film, the church makes death the focus of everything. We see a man in a church painting a mural that the priest ordered. The subject is “The Dance of Death.” The priests also hire a troupe of actors with death masks to perform on the church steps in Elsinore for the Saints’ Feast. One of the actors says, “If priests didn’t pay us so well, we’d turn them down”.

The emphasis of the teaching is on sin and death rather than the God’s grace. Block and his squire, Jons, come across a woman in stocks who is accused of being a witch. She’s accused of associating with the devil, and the plague is blamed on her. (Though this woman is burned at the stake for “causing” the Black Death, the clergy also manages to blame anyone else within earshot of culpability for the world’s ills.) 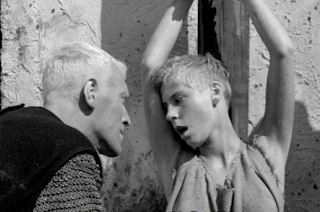 Scripture teaches that death came into the world through sin (see Genesis chapter 3), but when Jesus was asked who was to blame for a man’s blindness, the man or his parents, Jesus said neither. Even his blindness was to be a means of bringing glory to God. And He healed the man.

That is nothing like the message of the church in this film.

Antonius Block goes to a church to seek God. He goes before the crucifix and tells God to reveal Himself through Block’s senses. The knight wants to see God, but He isn’t visible; hear Him, but He is silent. Block goes to confess to a priest, but the priest is actually Death in disguise. As Scripture makes clear (in First Corinthians 15), Death is the enemy.

Block says of his inner struggle, “Faith is a heavy burden, it is like loving someone you never see.” And the knight knows about loving someone you don’t see -- he went off to the Crusades for ten years and when he returned, he didn’t know where his wife was. Yet at the end of the film he finds his wife. So is there hope in putting faith in a God one doesn’t see?

In later films, Bergman is even more pessimistic about the existence of God, but in this film, there are -- possibly authentic -- visions of the Virgin Mary and Jesus. In Block we have a character who wrestles with God and accomplishes good. Nonetheless, the best the church and clergy in this film deserve is a two steeple rating.
Posted by churchandstates at 9:55 PM