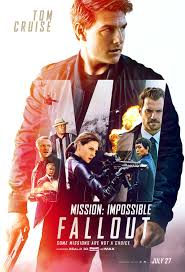 Mission Impossible: Fallout (2018)
Mission Impossible: Fallout, the sixth film in Tom Cruise’s popular series (based on the over fifty-year-old TV show), has been #1 at the box office the last two weeks and may be again next week. There’s not a lot of church in the film, and the little that’s there has nothing to do with the star’s church of choice, Scientology. No clergy are featured in the film.

I’d wager most film goers wouldn’t recall that an important theme of the film is religion -- one scene takes place in one of the world’s most iconic sanctuaries. That’s fine. Reminding people of such things is one of the reasons Movie Churches is here.

The film begins, as these stories do, with a mission that IMF (Impossible MIssions Force, not the International Monetary Fund) leader, Ethan Hunt (Cruise) must decide whether to accept. As often is the case, he’s asked to stop a terrorist plot. The terrorist is described as an anti-religious zealot whose first targets are the Vatican, Jerusalem, and Mecca; the gang of terrorists call themselves “the Apostles.” Not much is made of this motive as the film goes on, as the terrorist seems to become more fixated on a personal vendetta against Ethan Hunt.

I wondered what the filmmakers thought of the terrorists’ cause. Is being “anti-religious” like this terrorist a bad thing? Is his cause just, but his methods are bad? The film never really wrestles with issue.

As for the scene in the church… Sorry about this spoiler, but there’s a scene where Hunt is chasing a bad guy through the streets of London while being chased himself by other bad guys. (Hope I didn’t give too much away there.) Hunt runs into St. Paul’s Cathedral while a service of some kind is in progress. Maybe it’s a state funeral, since all the seats of vast sanctuary are filled with an elegantly dressed crowd that includes representatives of the military and perhaps some of the royal family. When Hunt barges into the proceedings, followed by armed thugs, everyone remains politely seated. Hunt apologizes to the congregants before dashing off.

One of the selling points of these films, like Bond films before them, is the opportunity to see some of the world’s most beautiful sights. St. Paul’s is certainly a gorgeous edifice, and it’s a cute little scene, if not at all realistic. I know, it’s shocking there would be something in these films that doesn’t achieve perfect verisimilitude, but here it is: in one of England’s great national landmarks, no one has given a thought to security.

In the wake of church shootings in the United States, most congregations have paid some attention to plans in case of a shooter scenario. Surely, in one of the most famous churches in the world, the leadership has given this some thought, and their plan would not be to have everyone sit quietly, looking polite but perplexed when a group of threatening men enter the building and go to the altar. Even aside from security plans, surely the military officers in the congregation would instinctively take action.

The film is a great summer action ride, with marvelous stunts and set pieces. As for the church in the film, until the cinematic St. Paul’s improves its security, the best we can give it is Two Steeples.
Posted by churchandstates at 9:23 PM

Email ThisBlogThis!Share to TwitterShare to FacebookShare to Pinterest
Labels: 2018, In theaters now