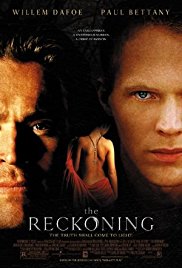 The Reckoning or Morality Play (2002)
The Reckoning (in Spain it was called El Misterio de Wells or Morality Play) provides an excellent transition from Mystery Month to Middle Ages Month, nicely fitting into both categories. It is set in England in 1380 (the title card reads, “For more than 300 years, Norman barons have ruled their domains with absolute power. Church and State speak with one voice to maintain the existing order…”) and tells the story of a disgraced priest solving a murder with the aid of a traveling troupe of players.

The film begins with a priest named Nicholas (Paul Bettany) ispeaking to his congregation from the pulpit, “Seek what is above, not what is on the earth… Every day I hear a grumbling against God. Times are hard. But let us not forget the writing of the Apostle to the Romans… Life has to be harsh to keep human happiness from being loved. It is still dark; we cannot yet see God or all He has promised us.”

As he preaches, he is distracted by a young mother nursing her child. Another woman seems to catch his attention as well. Flashbacks show us the priest sleeping with that woman, and we soon see him fleeing from the villagers -- who seem to have learned about the priest’s adultery. 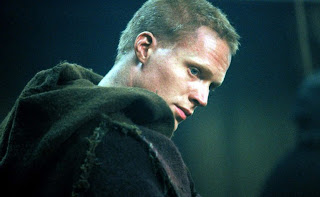 Now on the run, the priest comes across a group of traveling players. They think the worst of him, referring to him as “robber scum”, but he convinces them to allow him to join them. Eventually they figure out that he was a priest.

The acting troupe performs only Biblical stories, often retelling the stories of Creation, the Flood, the Passion, etc. Many of the players believe that varying from Scriptural truth with their plays would be blasphemous, but their leader, Martin (Willem Dafoe), thinks telling other stories might bring in more money. When they come to a small town where a boy has been murdered, Martin decides they should do a play that recreates the murder. The priest encourages them, saying, “God is everywhere, even in this story.”

But through the play, the priest comes to believe that the woman accused of the murder may be innocent, and he tries to convince the acting troupe and the village of her innocence. The question becomes, who did commit the murder?

But Nicolas is more than a detective in the film. When the troupe discovers he is a priest, they urge him to give a proper burial to a troupe member. Villagers call on him to do the same, and these functions bring great comfort even to those who seem not at all pious. Martin asks him, “What kind of God would allow such suffering in this world?”

And the priest responds, “Or such suffering for HIs own Son?”

We later learn some dark secrets from the priest’s past, but in pursuing the answers to the boy’s murder (and other killings that follow), he seeks redemption for himself and salvation for the village. The former brings down the Movie Churches Steeple rating for Priest Nicholas, but the latter brings him up to a rating of Two Steeples.
Posted by churchandstates at 7:40 AM