Small Town Movie Churches 2: There Will be Blood 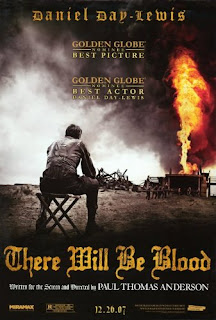 There Will Be Blood (2007)
The church in Southern California where I served my pastoral internship was across the street from an oil field. Most people probably don’t associate the Golden State with black gold, but in Fullerton in 1986, those little derricks were still pumping away right in the middle of Orange County.

2007’s There Will Be Blood, set in the fictional California town of Little Boston at the beginning of the 20th century, has as its central conflict the competition between the founder of an oil company and a church pastor.

Most of the critical focus on this idiosyncratic, epic classic from writer/director Paul Thomas Anderson has been on the character of the “oil man”, Daniel Plainview. Daniel Day-Lewis won an Oscar for his performance as Plainview, a self-centered entrepreneur, a misanthrope who considers himself in competition with every other person. Day-Lewis' Plainview is often found in lists of most memorable movie characters and performances. 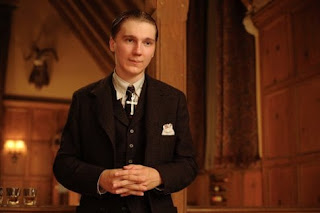 But this is Movie Churches, so our focus is on Plainview's foe, the Reverend Eli Sunday (Paul Dano). In the little town of Little Boston, Plainview negotiates (swindles) the locals for the oil rights to their land. When Plainview talks with Eli about his family’s land, Eli, wearing a clerical collar, asks, “What church do you belong to?”

Plainview responds, “I enjoy all faiths. I don’t belong to one church in particular. I like them all.” Eli asks for $10,000 for the oil rights to be directed to his church, Plainview counters with $5000, and Eli agrees. Plainview says, “I’ll happily be a supporter of your church for as long as I can.” That's one of many promises the man quickly breaks.

Plainview builds roads for his new project, and Eli asks for a road leading to his church, The Church of the Third Revelation. Plainview does not build that road. When Plainview christens the new oil well, Eli asks, “Is there anything the church can do for you? I will bless the well.” He asks to be introduced as “The proud son of these hills who tended his father’s flocks.” 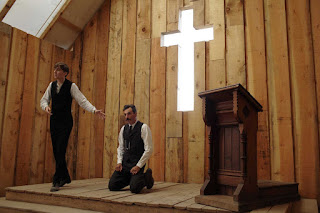 Plainview refuses and delivers his own prayer at the ceremony.

When a catastrophe takes place at the rig, an explosion and fire, Eli believes these disasters occurred because he did not bless the well.

The film does give us a glimpse of a service in Eli Sunday’s Church of the Third Revelation. It seems to have a charismatic feel, and Eli is a shouting kind of preacher.

He claims to heal. He says to a Mrs. Hunter, “You have arthritis. You have a devil in you, and I will suck it out. Get out of her, ghost. As long as I have teeth, I will bite you, and when I have no teeth, I will gum you.” He then mimes wrestling with this demon and tosses it out the door of the church. The congregation does sing “What a Friend We Have in Jesus,” but otherwise Eli doesn’t seem to have much to say about Jesus. 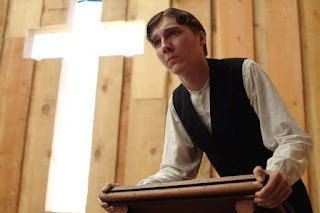 Another promise to Rev. Sunday that Plainview breaks is that promise of $5000. Throughout the film, Sunday pursues Plainview for the money like the paperboy who pursued John Cusack for his $2. At one point Sunday comes to see Plainview on his oil fields, and Plainview mocks him and pushes him in the mud. Sunday is so humiliated and angered that he goes home and beats up his own father.

Reverend Eli gets a chance for revenge when Plainview needs to lay a pipeline across a piece of property that belongs to a member of Sunday’s congregation. To get what he wants, Plainview must go to a service in the Church of the Third Revelation and confess his sins before the congregation and be baptized. Sunday forces Plainview to his knees and humiliates him in front of his congregation.

Plainview remembers this moment and takes his revenge later. At the conclusion of the film, Eli Sunday has moved on, starting a radio ministry. But he's morally strayed (we are spared the details) and is financially hurting. He goes to Plainview for help.

Sunday does everything Plainview asks. Plainview laughs at Sunday and tells him he will do nothing to help him. Plainview beats Sunday (in every possible sense of the word “beat.")

So Sunday denies God for money (and doesn’t get the money). In the Apostle Paul's second letter to II Timothy 2:12, Paul wrote, “If we deny Him, He will also deny us.” Eli's denial is just a mirror image of the earlier scene in the film when Sunday has Plainview baptized for money. Both actions were cynical acts of idolatry.

Which is why we’re giving the Reverend Eli Sunday and the Church of the Third Revelation our lowest Movie Churches rating of one steeple.
Posted by churchandstates at 9:18 PM