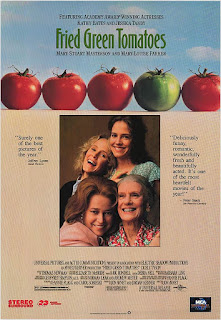 I’ve seen pastors do all kinds of stunts to tweak church attendance (or at least, Sunday School attendance). I’ve seen pastors give visitors prizes like chocolate and Starbucks coupons and movie tickets. I’ve seen pastors agree to sit in the dunk tank for hitting attendance goals. Pastors have agreed to shave a beard or even their scalps if all the seats were filled. But until I saw Fried Green Tomatoes I hadn’t seen a pastor willing to commit perjury to get someone to come to church.

Based on Fannie Flagg’s novel, Fried Green Tomatoes at the Whistle Stop Cafe, this 1991 film (taking just the first three words of the book’s title) is intended to be a tale of female empowerment. The story of Kathy Bates as Evelyn, a woman trying to save her marriage to a negligent husband, bookends the film. She meets an old woman (Jessica Tandy) who begins to tell her about two young women in the small Southern town of Whistle Stop between the World Wars.

Idgie (Mary Stuart Masterson) was a rebel who spends time at the poker hall and speakeasy. Her friend Ruth (Mary-Louise Parker), is a good girl who leads the youth ministry at the First Baptist Church. (Spoiler: we're supposed to be very surprised at the end of the film that when we find out the old woman telling the story was Idgie. Who else would have been telling this story?)

It seems that Whistle Stop, Alabama has something in common with other small towns all over the country -- like Weed, California, and Tahlequah, Oklahoma.

Years ago, I was a groomsman in a friend's wedding in rural northern California. The venue options for a bachelor party were limited, so we ended up in a Motel 6 room, and bottles were passed. I talked to a local, and she said people in the town divided into two groups, the churchgoers and the party people. People pretty much had to choose between being a part of one group or the other. This isn’t true of all small towns we’ve been to. In Texas, we heard many people talk about how you’ll see the same people in the bar Saturday night as you see in church Sunday morning. We heard the same thing at a bar in Oklahoma years later.

Whistle Stop seems to be the same kind of place. Idgie is a regular at the poker hall and Ruth can be found at the church, but their friendship draws them to the other’s territory. As Ruth teaches a Sunday School lesson on Job, Idgie listens in through the window. On Ruth’s birthday, Idgie takes her to the pool hall where she gets her friend drunk.

But the two friends are separated when Ruth leaves Alabama to marry a man named Frank and goes with him to Georgia -- but Frank is an abusive husband. Ingie visits Ruth, and with the help of friends (including George, a large black man) takes her pregnant friend back home.

Ruth has a son, and Frank goes back to Alabama to get this son. Frank goes missing, and Idgie is accused of murdering him. 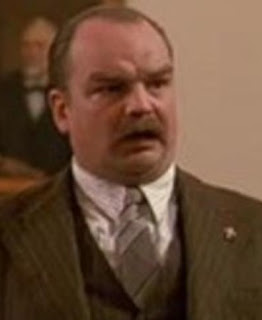 During the trial, the Reverend Herbert Scroggins (Richard Riehle) is called as a witness. Idgie has known him her whole life, but that's not necessarily a good thing. As a small child, she attended a wedding the Reverend conducted and used a mirror to reflect light into the minister’s eyes. Idgie's brother died, and the Reverend conducted the funeral. And when he preached against the poker hall, Idgie shouted and mocked from the back of a truck as she rode to the poker hall, calling him a snake. Their relationship was, to say the least, testy.

So Idgie is concerned about what he'll say at her trial. He's offered a Bible to swear on, but he says he’ll swear on his own, then testifies that on the night of Frank’s disappearance, Idgie was at a church revival.

The prosecutor questions whether the revival wasn’t two days before Frank’s alleged murder. The Reverend asks, “Have you ever been to a Baptist revival? That revival went for three nights.”

Of course, Idgie wasn’t at the revival. She was at the poker hall, but she was called away because of a disturbance at the Whistle Stop Cafe. Frank had come to steal away his child. He attacked Idgie’s friend, George, and another friend, Sipsey (Cicely Tyson) hit him over the head with a frying pan. Frank was killed. Idgie came to the cafe and helped cover up the killing.

But the Reverend’s false testimony was enough to free Idgie. After the trial, she asked him why he was willing to lie after swearing on a Bible. He admitted the book wasn't a Bible --  it was a copy of Moby Dick, and he committed perjury in exchange for Ruth's promise that Idgie would regularly attend church. Idgie says she would have rather have gone to jail but apparently keeps to Ruth’s commitment.

Now, it’s swell that the Reverend Scroggins cares about Ruth and Idgie, but integrity is essential to a pastor’s call and ministry. He shouldn’t be telling lies of any kind, let alone under oath in a court of law. (And no, swearing on Melville rather than the Word of God is not a get-out-of-jail-free card.)

Still, Scroggins’ compassion does save him from out lowest Movie Church Steeple rating, so he gets a little better than our lowest rating. Two Steeples for First Baptist of Whistle Stop.


Posted by churchandstates at 7:32 AM