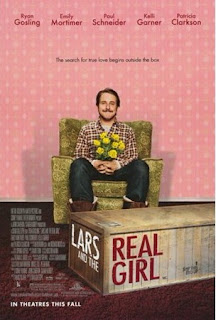 Small towns used to be happy places in movies. Who wouldn’t want to live in the Bedford Falls of It’s a Wonderful Life? That used to be a fairly typical depiction of small towns in films: happy places where everyone cared for each other. Small towns in contemporary films tend to be sinister places with dark secrets -- and few small towns have secrets darker than those in another recent film, Get Out. 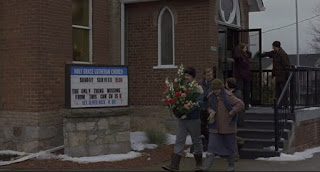 Even more atypical, the small town church in Lars and the Real Girl is nice as well.

Ryan Gosling plays Lars, a strange young man who has a difficult time relating to people. He's particularly awkward with women. One day he orders a life-size woman doll from an adult website and, once she arrives, introduces her to people as his new girlfriend. Taking a cue from a Dr. Dagmar, a family doctor and psychiatrist (Patricia Clarkson), people in town agree to treat “Bianca” as if she were a real girl in hopes that it will help Lars work out emotional and psychological issues.

An interesting thing about Lars’ relationship with Bianca is that it is chaste. He has his “girlfriend” stay in a spare bedroom at his brother and sister-in-law's house, saying  “She’s really religious; could she sleep at your place?” (His brother, Gus, is played by Paul Schneider -- who also played Mark Brendanawicz on Parks and Recreation, one of the great TV shows about small-town life.)

Lars introduces Bianca to people as a missionary and an orphan raised by nuns. “God made her to help people.”

The really interesting thing, for us here at Movie Churches, the local church, Holy Grace Lutheran Church. Before Bianca’s arrival, we see Lars listening to a sermon by the Reverend Bock (R.D. Reid). He’s talking about how the world is full of books and books of law. But, Reverend Bock says, “There is one law; love one another, that is the one true law.” 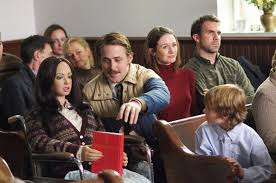 We see a meeting of some kind of church board that debates about how they should treat Lars and Bianca. One man at the meeting says they should have nothing to do with Bianca, but a woman on the board points out that another woman in the church is a kleptomaniac, and a man in the church dresses his cats. She says they need to treat Lars with kindness. The pastor says the important thing to consider is “what would Jesus do,” and he believes they shouldn’t judge Lars. Instead, they should treat Bianca with kindness as a way to love to Lars.

So, when the pastor welcomes visitors as a part of the Sunday morning service, he welcomes Bianca. The rest of the service seems rather conventional, with the congregation singing “Holy, Holy, Holy” and a sermon on I Corinthians 13.

The church (and the whole town, for that matter) take Bianca into their lives, and their acceptance seems to help Lars move on with life. Lars informs Dr. Dagmar that Bianca is sick -- in fact, dying. The ladies of the church come to sit with Lars for the “death watch,” bringing plenty of casseroles with them. They make sure Lars eats and rests while he waits. Bianca does “die,” and the church holds a memorial service for her.

And Lars seems to be better, stronger. He even asks a woman in the church choir on a date.

People talk about “Minnesota Nice,” but I think that "nice" crosses the border into Wisconsin, earning the Reverend Bock and his congregation our highest rating of Four Steeples.
Posted by churchandstates at 8:49 PM