Originally posted at Dean and Mindy go to church January, 8, 2015. 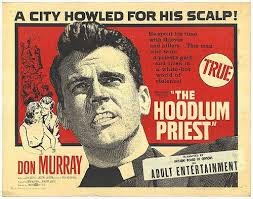 Won't lie, I ordered the DVD of The Hoodlum Priest because, well, it's called "The Hoodlum Priest." Though it sounds like it might be good camp, a quick look at the credits suggests there may be more to it than that. It's directed by Irvin Kershner -- who went on to direct The Empire Strikes Back. One of the star "cons" is played by Keir Dullea -- who played Dave in 2001: A Space Odyssey. The camera work is by Haskell Wexler, one of the great cinematographers (who's also a two time Oscar winner). So even though there are moments of camp (it's hard for modern ears to take seriously anyone, especially a priest, saying, "You dig?" Oh, how those hip people talked back in 1961), eventually you take Father Charles Clark quite seriously. Though the credits say the screenplay is based on an "original story," it's also based on the life of the real Father Clark who founded a halfway house, Dismas House, for ex-convicts.

As the film opens, Clark (played by Don Murray, who also co-wrote the screenplay) is a teacher at a parochial school The priest principal compliments him on his ability to "reach the kids," but you can tell Father Clark is restless in his job. He asks to be excused from a parent/teacher conference because he wants to be with his "parishioners." Which means he's going to a dive bar.

He explains that he grew up in a coal mining town and his father was a union organizer. The police were the strike-busters and, for him, the enemy. (for what it's worth, the St. Louis police were thanked for their support for the film). He talks about how criminals divide the world in "squares" and "cons," and he's always felt more comfortable with the cons.

Father Clark does what some in theology call "incarnational ministry." Just as Scripture teaches that Jesus was God who became man, incarnational ministry is when someone enters another world. Incarnational youth ministry, for example, happens when -- instead of just inviting kids to events or to church -- the youth worker purposely hangs out where kids hang out and spends time in their world.

Since Father Clark's spends most of his times with crooks, people assume he is a crook, just as people assumed Jesus must be a sinner because that's who he hung out with.

There is a wonderful scene toward the end of the film when Father Clark goes to be with a con facing the gas chamber. Another priest is already there, but the con doesn't want to listen to him. (Father Clark does say, "You should listen to him, those are good prayers.") But Father Clark tells the condemned young man, "You know, the squares think heaven is their territory; that they've got it all sewn up. But Jesus never promised any square he was going to heaven. He only made that promise to a con. Next to him on the cross was a thief, maybe he was a murderer, but Jesus said he'd be with him in paradise. Only to a con." And this, the man hears.

I'd go to Father Clark's church. I'm just not sure he'd want a square like me to come.


Posted by churchandstates at 8:05 PM