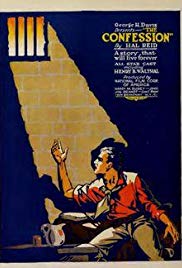 Sometimes it seems as if every movie takes place somewhere between the moon and New York City --either in a land of fantasy or rarified Manhattan (but I repeat myself). But some movies are set in a different place. This month we’ll be spending all of our time in small town America, in rural churches.

We’re starting with a film nearly a century old, 1920’s The Confession. When released back in the day, it would have seemed like a contemporary tale, but from today’s perspective the setting of Deer Lodge, Montana seems like the Old West.

The film opens with an illustrated Bible verse: a priest standing on a rock by a lake in the woods, with the words of Matthew 16:18 (“On this rock I will build my church”) superimposed on the screen.

Immediately the audience is given something else to read -- a title card. “The Walled Sanctuary -- Within the sacred silence of the Roman Catholic Church are recounted the sins, transgressions and sorrow of countless thousands and whatever be our religion we are bound to respect that exalted devotion which prompts a priest to hold forever inviolate the secrets of the Holy Confessional.”

It's interesting that in this film, the Confessional is treated as an exotic practice while still emphasizing the importance of respecting another faith’s practices. The concept of the confidentiality of the confessional was used in many films and television shows over the years (for example, in Alfred Hitchcock’s I Confess), but this may be the first time the practice was used as a plot device.


Let’s start with a plot summary. 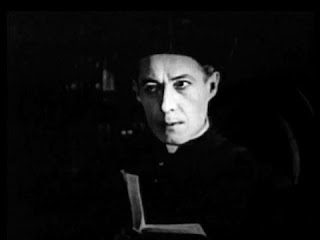 Father Bartlett (Henry Walthall) lives with his mother and brother, Tom (Francis McDonald), in a small, Western town. The brother is a heavy drinker, much to his mother’s distress. A stranger, Joseph Dumont, comes to town seeking revenge against the man he believes dishonored his sister. He kills the man and confesses the murder to Father Bartlett. But the priest’s brother, Tom, is accused of the murder.

Tom is arrested. A crowd of citizens forms a mob to rescue Tom (wearing KKK type hoods, with very poor cutting skills for the eye holes). Father Bartlett stands against the crowd, trusting God for salvation rather than human strength or cleverness.

The trial is held. Father Bartlett is called to testify and refuses to share what Dumont confessed to him.

Tom doesn’t appreciate his brother’s stand. When Father Bartlett visits him in the cell, Tom knocks his brother out and escapes in the priest’s clothing.

Tom hops a train to Canada, and in a train car meets the real killer, Joseph Dumont. Since Tom is still in his brother’s clerical collar, Joseph mistakes him for a priest and confesses again. The two fight and then separate. Both wind up in Canada.

Father Bartlett follows his brother north of the border, but the Mounties find Tom before his brother does and ship him back to face the gallows. Bartlett finds Dumont and convinces him to go back to Montana to confess. But will they make it in time?

If you want out what happens next, you can find the film on YouTube. The question for this blog is, what kind of priest was Father Bartlett?

On a title card, he's described as “A man who sees the beauty of all things,” even in an alcoholic like his brother and a murderer like Dumont.

He treats even a man like Dumont with respect. After the confession, Father Bartlett tells him, “You must pray morning, noon, and night, for the soul of the man you have murdered. Until the end, he may intercede for your salvation. I am about to absolve you, but before doing so you must promise, should the weight of your crime fall upon another, you will make reparation.” Some questionable theology in that statement, but it is compassionate.

Father Bartlett's treatment of his brother is even more problematic. Since he urged the killer not to let another be punished for his crime, it seems like he could have been more proactive in the situation without breaking his promise to Dumont.

But all turns out well in the end. As the priest says, “By faith in God and His infinite mercy the sunshine of love has come to stay.” So Father Bartlett earns our highest rating of Four Steeples.
Posted by churchandstates at 9:30 PM