European Vacation 3: At the Movies 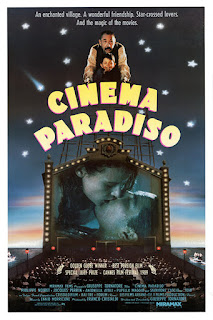 Cinema Paradiso, 1988
I was a youth pastor for a lot of years, and when youth pastors got together, they all seemed to have a story about showing their kids movies they regretted. On the mild side, Eric showed his high schoolers (at a very conservative church) Close Encounters of the Third Kind -- not remembering the adult language in the PG-rated film. Then there's Paul, who showed his church kids an Italian gladiator film with a graphic orgy scene -- which wasn't in the TV version he'd seen. Incidents like these induce some youth workers to show only Christian media to their students.

If you’re a parent, you probably can probably relate to this. You remembered Gremlins as a cute film with that adorable Gizmo, so you show it to your kids -- completely forgetting the gremlins smoking and the gremlin in the blender and Phoebe Cates telling about the death of Santa. Maybe you watched the whole film with the kids, and maybe you stopped it halfway through, but either way, you felt like a terrible parent.

In a long-winded, roundabout way I’m trying to get to the point that there is a place for censorship in this world. “Censor” is always a bad word -- when someone else is doing it. Libraries have weeks dedicated to banned books and decry those who tried to keep kids from reading Harry Potter and Huck Finn, but those libraries do, rightly, censor their selections. Even when Playboy was a much more popular magazine, public libraries didn’t stock it on the magazine rack.

I’m all for the First Amendment. If people (especially children) aren’t harmed in the production of a film, magazine, or book, people need to be free to produce it and have free access to it, because freedom is the foundation of what is good in this country.

People also need to have the freedom to choose not to read or view certain things. 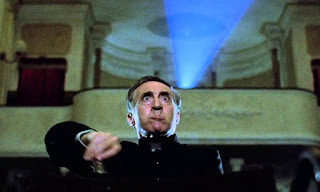 That's why I'm sympathetic toward the priest in Cinema Paradiso.

The film tells that story of an Italian film director, Salvatore (or "Toto") in 1980’s Rome and his memories of growing up in the small town of Giancaldo, Sicily. As a very young boy, he lost his father, who died on the Russian front during World War II. Two men take the role of surrogate father. One is the town’s priest, Father Adelfio, and the other is the town’s projectionist, Alfredo.

Toto is an altar boy, and we see six-year-old Toto falling asleep during the Eucharist. The priest needs Toto to ring a bell, so he wakes him up (“The boy will be the death of me”). We then see the priest doing another part of his job.

The town has no movie theater, so movies are shown in the church. Every night of the year, Alfredo shows a film -- except Good Friday (“If they hadn’t put Jesus on the cross, I never would have a day off,” he says). But before people in town can view the film, it must be previewed by the priest. 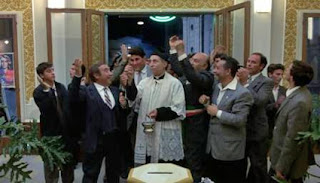 As Father Adelfio watches the film, he rings a little bell whenever something “objectionable” takes place on the screen. Alfredo marks the place in the film reel with a piece of paper, and before showing it for the town, he edits out the objectionable material. The most common problem is a romantic kiss. Every romantic kiss is cut out of every film. (Toto sneaks into the church for these screenings and sees the whole, uncensored film.)

The screenings in the church aren't allowed purely for the town's entertainment. The church gets a cut of the box office, and the priest is quite upset when Alfredo projects a film in the town square for free.

The audience notices the missing sections -- when couples onscreen prepare for an embrace and suddenly the scene changes to a different location, the audience boos. (One man says, “I’ve never seen a kiss in twenty years.”) But they keep coming back every night.

Toto asks Alfredo for some of the censored clips, which Toto puts in a canister with family photos. But film was quite combustible at the time, and the material in the canister catches fire in Toto’s room. Toto’s mother stops the fire, but gives Alfredo a tongue lashing for putting her son in danger.

A businessman sees an opportunity and builds a theater in town, the Cinema Paradiso. Before the opening of the new theater, Father Adelfio blesses it, sprinkling holy water over the rows of seats, the concession stand, and the projection room. But during the very first screening, Father Adelfio is offended by a scene in which a woman reveals a bare shoulder. A man kisses her shoulder, then kisses the woman’s lips. The priest stands and walks out of the theater saying,“I won’t watch pornography.”

Toto has learned enough from Alfredo to become the projectionist for the new theater. He takes the job for years But Alfredo tells Toto he is meant for more, and must eventually move on. (“Now the Cinema Paradiso needs you and you need the Cinema Paradiso. But this is just a stopgap.”)

Eventually, Alfredo convinces Toto to leave the town and strike out on his own. He tells Toto not to come back, and Toto takes his advice. He leaves town. He doesn’t even say goodbye to Father Adelfio. (Though the priest tries to say farewell, running to the train station, saying “What a shame!”)

At the end of the film, Salvatore returns to his hometown for the first time in thirty years to attend Alfredo the projectionist’s funeral, conducted by Father Adelfio. (Over those thirty years he hasn’t even returned to see his mother.) 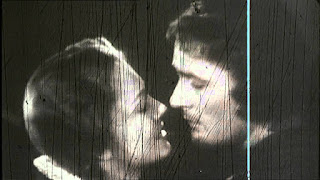 Toto discovers that Alfredo left him a gift. A film reel of the scenes Father Adelfio had censored spliced together into one glorious montage of kiss after kiss (from His Girl Friday, The Son of the Sheik, The Outlaw, and all kinds of Italian and French films I didn’t recognize). There is also a clip of a topless woman (in a bed) from 1942’s La Cena Delle Beffe that still wouldn’t air on American network TV.

We might be tempted to judge Father Adelfio as a prude who kept people from viewing innocent kisses. But if it wasn’t for him, and his decision to screen films in the church, many people would never have seen these films at all.

As someone who loves movies and the Church (that's kind of why I run this blog), I’m giving the priest a respectful rating of Three Steeples.

Posted by churchandstates at 9:50 PM