In Theaters Now! Run the Race 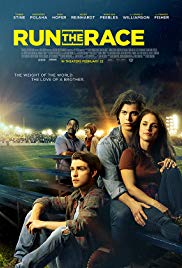 Not surprisingly, the movie he produced, Run the Race, is about football. And faith.

Tebow was a controversial figure because he was outspoken about his Christian faith -- and this is a Christian film. Tebow has said it's the kind of Christian film he’s always wanted to see, where everything isn’t easy and bad things happen. Turns out, it’s not a horrible film.

Likable actors were cast in the lead roles of two brothers who lose their mother to cancer and are estranged from their alcoholic father. Tanner Stine plays Zach, a football star who has lost his faith. Evan Hofer plays his brother, Dave, who was knocked out of football by injury but has a strong Christian faith. The boys are supported by their godmother, Nanny, played by Francis Fisher (Unforgiven). Kelsey Reinhardt plays the girlfriend who faces conflict with Zach over issues of faith.

The boys face dramatic challenges and not everything is resolved on the football field. 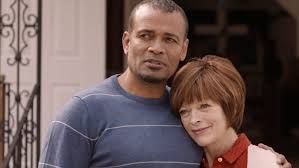 Most importantly (for this blog anyway), the boys are supported by Pastor Baker played by Mario Van Peebles (director of New Jack City). The pastor is a casual guy, preaching in khaki pants and a plaid flannel shirt. Though Dave usually attends church alone or with his Nanny, both boys attend a Christmas service together. The sermon is theologically sound -- about a “moment” that changes everything, the moment God entered the world. We hear bits of two other sermons which are fine, but I don’t remember any specific Scripture.

He serves a small country church in Bessemer, Alabama*. The building is worn but respectable, which is more than can be said for the town as a whole. Bessemer just seems worn, but it does seem real. You can understand why the brothers want to escape the place.

Finally, the film does convey a tangential, but important message: the superiority of Dr Pepper over Coca Cola.

As for our Movie Church ratings, the little church and its pastor show no flaws, so they earn the full four steeples.

*Bessemer, Alabama is a real town, by the way. During our Alabama week in 2016, we camped at Tannehill State Park outside McCalla, the next town south.
Posted by churchandstates at 8:10 AM