European Vacation 4: The American on a "working vacation" 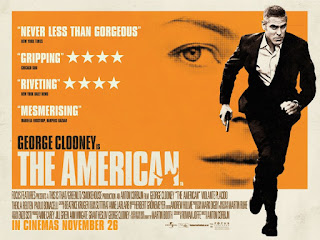 The American (2010)
Okay, so George Clooney (as Jack Clarke) is on a “working vacation” rather than just a European vacation. He tells a priest that he's a photographer taking shots for magazines and tourist guides, which is not completely true. He is taking shots, but as a gunsmith and assassin. But he's still, you know, taking in the sights.

When The American (directed by Anton Corbijn) came out, many were surprised that it had a big first weekend at the box office. People went to the theaters to see a George Clooney espionage film full of sex and violence. Audiences soon discovered that though there were moments of gunfire and nudity, this was pretty much an art film with long, slow passages where we see first Sweden and then Italy -- along with large helpings of existential angst.

The few bright, lively moments in the film are supplied by a local priest. I don't think that was ever the case in, say, a James Bond movie.

While trying to place a call on a pay phone (this was way back in 2010) in a small town in Italy, Jack is approached by a priest who asks, “Can I help you?” The priest recognizes a stranger in town and isn’t at all shy.

He asks Jack if he speaks Italian, and the response is “Poco.” So most of their conversation in the film is in English. The priest asks what Jack in doing in the town, which is when Jack first lies to him about his profession. And the priest asks many more questions about Jack’s job, leading to Jack lying all the more. The priest then makes an invitation, “You must share a glass of wine with me tonight. You want to know the truth about Abruzzo?” (Abruzzo is the region where the village is.) “You must talk to me. A priest sees everything.”


It is true Jack is in Italy only partly for an assignment (to provide a weapon for an unspecified killing). He is also there to hide. When in the small town of Dalarna, Sweden, men tried to kill him for reasons he can’t determine. He is hiding from those who may wish him dead. Meanwhile, Jack does spend time with the priest.

The priest, Father Benedetto (Paolo Bonacelli), doesn’t just offer wine, “The quality of the brandy is good.” The priest asks Jack if he’d studied the history of the area, and Jack says, “No.” Father Benedetto responds, “You come to Italy to make a guide book and you don’t care about history. Of course, you are an American. You think you can escape history.” 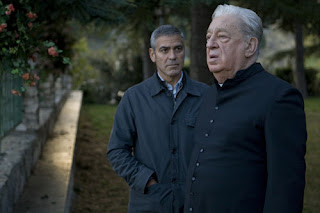 Later, the priest makes a meal for Jack. (He crosses himself before eating, but doesn’t say grace aloud.) Jack asks him, “Have you ever wanted to be anything but a priest?”

They discuss vocation and calling and the priest notes that “A man can be rich if he has God in his heart.”

Jack finds the priest on an early morning walk in the woods. The priest says during those walks, “I thank God for certain favors He has given me. And I ask him to look out for those of my friends who are sinners.”

“All men are sinners,” Jack responds.

The priest says, “But some men are greater sinners. You have done much sinning, Mr. Clarke, and you still do.” (The priest may not know the full extent of Jack’s sin, but he knows they’re great.) “Do you wish to confess for your sake?”

Instead of confessing his own sin, Jack asks the priest whether the “car doctor” is the priest’s son. The priest confesses it’s true, “Perhaps I have no right to wear these robes. But I have a heart full of a father’s love. Something close to His heart. And for that, I am grateful and happy.”

Jack and the priest part, and they don’t see each other again until Jack is involved in a shootout at the end of the film in the midst of a parade in honor of the Virgin Mary. The priest finds Jack by the body of a dead woman, and Jack says, “I’m sorry, Father.” A short confession, but a confession nonetheless.

Father Benedetto is not without faults, but he can spot a troubled stranger and finds a way to befriend him and point him to redemption. For this, the priest receives a Three Steeple rating.

(This film, featuring a couple of small European villages, provides a nice transition to next month’s theme of small towns -- but I believe they’ll all be American towns.)
Posted by churchandstates at 7:27 AM