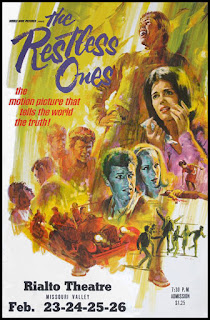 This might surprise some who are familiar with the filmography of the two studios. After all, AIP is known for such titles as Scream Blacula Scream, Teenage Caveman, and How to Stuff a Wild Bikini while WWP had more tame titles such as The Hiding Place, Road to Redemption, and For Pete’s Sake!

There is common ground, though. Both studios were independent when big studios were at their height, but about to fall. Each studio was closely associated with one man. Roger Corman was the face of AIP, a filmmaker who became a mogul while taking on the big studios. WWP was almost synonymous with evangelist Billy Graham, with a rule that the preacher must appear in every film and present the Gospel. Both studios provided opportunities to young talent, with AIP famously providing first opportunities for such luminaries as Francis Ford Coppola, Martin Scorsese, and Jack Nicholson. Both studios exploited hot issues of the day for profit.

AIP focused on teens, using sex, drugs, and rock’n’roll to make a buck. WWP explored first two to proclaim the Gospel. WWP made films that touched on drugs (Two A Penny), rebellion (Time to Run), and crime (Wiretapper) to reach the lost. They even made a film that focused on teen sexuality (chastely, of course) in 1965’s The Restless Ones.

The film tells the story of Stephen and Gina Winton, television writers doing a story on “today’s youth.” They’re also the parents of one of “today’s youth,” David. (I need to say a bit about the casting of these films. Georgia Lee, who plays Gina Winton, appeared not only in last week’s WWP film, Oiltown U.S.A., but went on to secular exploitation films Big Bad Mama, Linda Lovelace for President, and Switchblade Sisters. Johnny Crawford plays her son, David; a few years earlier, he played the son on TV’s The Rifleman. Robert Sampson (Stephen Winton) was on one of my favorite episodes of Star Trek, “A Taste of Armageddon.”)

The story opens in a church. David is with a group of young hooligans who have broken into the sanctuary at night. David is obviously uncomfortable, and one of the others says, “He’s afraid someone will know he’s in church.”


April, the one young woman in the group, says “It’s kinda spooky, isn’t it?” (April is played by Kim Darby, a few years before her star-making role in 1969’s True Grit and the title role in another great episode of Star Trek, “Miri.”) One of the kids starts tearing pages out of a Bible and throwing them about, saying, “Let’s spread the Word.” They drive away singing “When the Saints Go Marching in,” but cops catch them and take them to jail. They’re eventually released, but the judge lectures David’s parents on parenting.

While researching their story, Stephen and Gina are surprised to learn about the thousands of teens attending the Billy Graham Crusade in town. They get press passes and attend one night, listening to Billy’s sermon on young people’s obsession with sex. “The Bible is not hush-hush about sex. There is nothing wrong with sex. God gave it to us for certain reasons, but only in the bonds of marriage. It is normal to have sex hunger, but say ‘no.’ Don’t go so far in petting that it goes too far to call out to God.” (It is rather amazing to see the footage of the Crusade of the day with all the men, including teens, wearing coats and ties and all the women, including in teens, in dresses.)

Billy goes on to urge people to live wholesome lives but says that in that day and age they can’t do so without the power of Christ. He urges the crowd to accept Jesus as Lord and Savior, and the Wintons marvel at the number of young people who come forward.

At the end of the meeting they seek out the man in charge of ministry to teens, Youth Pastor Reverend Tim (“Call me Tim”). He tells them the young people are at the meetings because “they want to have purpose and direction.” Reverend Tim invites them to the next gathering of youths at Crystal Cove, a beach in Malibu.

The teens at the beach aren't wearing bathing suits, but most of them are in Bermuda shorts and Hawaiian shirts. There are guitars and other instruments along, and the kids sing a rousing version of “He’s Everything to Me.” Then the young people share how Jesus changed their lives.

“We all have hang-ups, hurdles to get over, but Christ is there to help.”

“Do you know what bugs me? This kooky idea that being a Christian means having no fun when actually life becomes fuller.”

Rev. Tim gives a talk, noting that the “new standards of freedom” aren’t helping anyone. VD was spreading among teens. “That’s where God comes in the picture… He comes to bring abundant life.”

Afterward, Stephen and Gina discuss Rev. Tim and the youth group. Gina says, “Tim is quite a guy, not your stereotypical minister.”

Stephen says, “They all made it seem so vital, so immediate. Is this something we should consider?”

Gina responds, “I don’t think teenagers should have a monopoly on the Almighty,” and together, they both pray to receive Christ as their Savior.

Davie is not impressed with his parent’s new “church jazz.” He says “that sin bit...is so corny.” He’s also desperate for April’s attention, but April has been living a wild life. She buys alcohol with a fake ID (under the name Alice Cooper). Eventually, we learn that she’s been seeing an older man and is pregnant with his child.

Davie sees the error of his ways and agrees to go to the Billy Graham Crusade with his parents. Billy is preaching on sin (including “racial hate” along with lying and adultery). Like his parents, Davie, too, decides to follow Jesus, and we know the Winton family is going to be okay. (Though I really doubt they'll get their show about teens on network TV with all that religious content.)

I’m giving Billy Graham and Rev. Tim our highest Movie Churches rating of 4 Steeples.
Posted by churchandstates at 7:19 AM