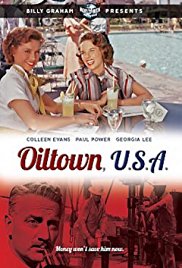 Oiltown U.S.A. (1953)
Understandably, when Billy Graham passed away in February, the chief focus was on his work as an evangelist. He preached to more people in more countries than anyone in history, but some also talked about the societal changes he facilitated by bringing churches of different denominations together and by working with Dr. Martin Luther King Jr. to bring black and white churches together.

I haven’t heard so much about the innovations Graham’s organization made in the world of Christian films. Before the Billy Graham Evangelistic Association founded World Wide Pictures in 1951, the Christian film industry didn’t exist. World Wide Pictures not only produced but also distributed their films (as all big studios did before practices were changed by antitrust laws). Their first film was Mr. Texas, which Graham called the “first Christian Western.” While he wasn’t involved with most of the day-to-day operations of World Wide Pictures, the films were made with one stipulation: in every film, Graham would appear and present the plan of salvation.

In honor of Billy Graham, we’ll be looking at a couple of World Wide Pictures releases over the next couple of weeks, starting with 1953’s Oiltown U.S.A. 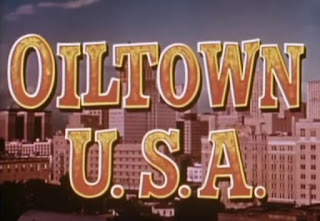 The film opens with a rousing title theme song with such lyrics as “Oiltown U.S.A! Everyone knows that it’s great. It’s the pride of the U.S.A.” referring to Houston, Texas. The film is the story of oil tycoon, Les Manning (Paul Power, guest star on seven episodes of Perry Mason), who’s known for his shrewd (and unscrupulous) business dealings. When his daughter, Christine (Colleen Townsend Evans), comes home from college, she’s shocked by changes in her widowed father’s life. She visits a downtown club to discover him playing roulette with an adult beverage in his hand and standing next to a woman in an evening gown. This understandably gives Christine the vapors. 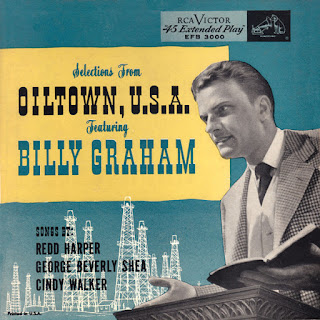 But Christine surprises her father by hanging out with his business associate, Jim Tyler (the title character in Mr. Texas, played by Redd Harper), and his wife, Katherine. Jimmy sings “Jesus is my Partner” at a dinner party both Mannings attend, and he and Katherine both talk about Jesus, which doesn’t please Les Manning at all. Since his wife’s death, Manning’s tried to keep God out of the household (“religion and Les Manning have nothing in common”). He wants to be absolutely self-reliant, saying, “There’s my God, two strong hands!” In spite of this, tension with his daughter leads Les to contemplate suicide.

Things turn around when he happens upon life-changing television programming. He’s flipping channels (with what, four, five channels to choose from?) and happens upon the song stylings of George Beverly Shea and stops. Then Billy Graham himself appears on the screen, and we the audience are transported from the black and white preacher on the television to seeing the man himself in the studio in living color. 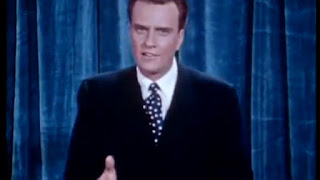 Graham turns in his Bible to I Peter 5:7 where we are called to cast our anxieties upon God. “God loves us… He’s interested in you… Anything you love more than God is idolatry… There are hundreds of you guilty of profanity… It’s heaven or hell, your only chance is Christ as your personal savior… You can do it right now, where you are. How long will it take? In the twinkling of an eye.”

Manning prays “the sinner’s prayer” and wants to tell his daughter. She’s on his yacht, though, cruising near the location of an explosion of a Manning Oil Company well and line. The small town of Texas City is devastated! Manning hurries to see if his daughter is all right.

He finds her with a friend, tending to the wounded in the small church providing shelter in the wake of the disaster. Manning tells his daughter of his decision to trust in Jesus, and she exclaims that the prayers of her mother have been answered.

The film closes with Manning in the sanctuary of the church saying, “It’s been twenty years since I’ve been in a church. I can’t help but wonder if a few minutes spent in here will help me do a better job out there.” Manning turns his eyes to the cross in stained glass, and the camera turns there as well.

Since we’re here to review churches and clergy in films rather than the films themselves, we appreciate that the church in Texas City, Texas, was ready to meet the needs of the community during a disaster. As for clergy, it’s always good to have more of Graham’s preaching preserved. Both church and clergy in the film earn our highest rating of Four Steeples.
Posted by churchandstates at 7:20 AM