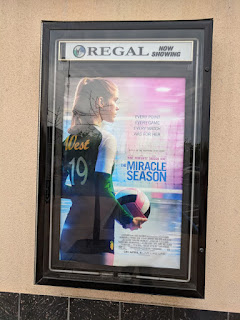 The Miracle Season (2018)
There are two kinds of sports stories that Hollywood seems to love above all others. One is the underdog story of competitors that overcome great odds to win the championship. Hoosiers (a basketball story) is probably the best story of this kind. The other is a tearjerker about the death of a beloved athlete, perhaps best exemplified by Brian’s Song (a football story) or maybe Bang the Drum Slowly (a baseball story).

The Miracle Season combines both a championship chase and the death of a beloved sports star. Featuring two Oscar winners (William Hurt as Ernie Found and Helen Hunt as the volleyball coach), the film tells the true story of the Iowa City West High School that won the 2010 state volleyball championship. The winning team was led by their center, a charismatic young woman named Caroline Found (generally called “Line” and played by Danika Yarosh). This story isn’t as much about that championship, though. Found died at the beginning of the 2011 season, leaving the team to play on in spite of their grief.

In 2016, my wife and I visited a movie theater, a bar, and a church in every state. In Hawaii, we met the pastor featured Soul Surfer, the film about Bethany Hamilton, who lost her arm to a shark but kept on surfing. It was fascinating to hear how the filmmakers tried to limit explicitly Christian elements of Hamilton’s story. (We heard that Carrie Underwood, as the youth pastor, read scripture during a scene. The director asked her to do the scene again, without the scripture. Underwood refused, saying, “If I do that, you’ll just use the take without the scripture.” The scripture reading is in the film.) 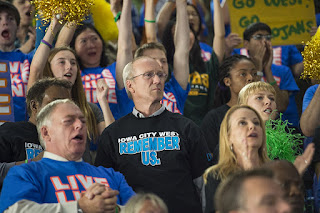 As I watched The Miracle Season, I couldn’t help wondering whether there were faith elements from real life that were cut from the script. For instance, Caroline’s father, Ernie, had been a church goer. Caroline’s memorial is held in a church, and in a movie scene taken from real life, Caroline’s cancer stricken mother, Ellyn, refuses to use her wheelchair, but instead walks down the church aisle for the memorial service. Ellyn died the day after the funeral.

We see one of Ernie’s friends, a fellow doctor who works in the same hospital, invite Ernie back to church. Ernie refuses saying, “God hasn’t exactly shown up for me lately.” Later, though, Ernie meets with this same friend, Dr. Paul Vetre (Cedric De Souza), at the church -- which is a bit of a strange scene, these two doctors alone in a church sanctuary. Ernie says, “I think it’s time for me to express some overdue thanks. I was so angry.” He thanks God for the years he had his wife and daughter.

It’s a good scene, but thinking of Soul Surfer, I kept wondering if there was more to Ernie’s faith story that the film was holding back.

One of the things that touched me about the film was when the coach and players realized that they didn’t need to “Win for Line,” but that instead they needed to play for the joy of it and “Live Like Line.” This hit me a little more, because it reminded me of a young friend who died much too early. His family took the opportunity to encourage people to “Live Like Drew.” Both young athletes inspired charitable institutions, so I’d encourage you to consider giving to the Live Like Line Foundation or the Live Like Drew Scholarship.

We aren’t reviewing movies here, but rather churches and clergy, so while we don’t see much of the church in the film, what we see is good, earning it our highest rating of 4 Steeples.
Posted by churchandstates at 7:32 AM