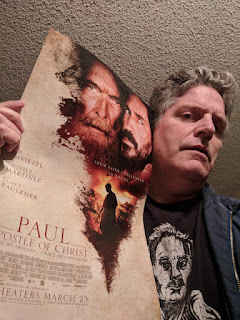 Paul, Apostle of Christ (2018)
We don’t often do Biblical films at Movie Churches. The only film of that genre I remember writing about is Risen, the story of a Roman soldier charged by Pilate with finding the body of Christ, one of the films we saw in 2016 when we went to the movies (along with going to bars and churches) in a different state every week. For the most part, the films thought of as “religious” or “Christian” have no place on this blog.

You might think that doesn’t make sense, but here’s why. As a rule, this blog is about films that have Christian churches and/or Christian clergy. Internet lists of the best religious films tend to include movies like The Ten Commandments or The Prince of Egypt (both of which I loved), and those will probably never be featured here at Movie Churches because Moses was not a Christian clergyman (neither was his brother, Aaron). The many films about the life of Jesus, from 1927’s King of Kings to 2004’s The Passion of the Christ, don’t feature churches. Jesus’ disciples, the Apostles, are generally part of those movies; they’d go on to be church leaders, but they weren’t yet.

Andrew Hyatt, the writer and director of Paul, Apostle of Christ, decided to tell a fictional story using historical characters. I think it was a good choice. Sometimes, when Biblical text is used for a script, arguments about whether the film accurately depicts the text, distracting from the film itself. It’s not a problem if you start with a fictional episode.

The film is set in Rome in 67 AD, during the final years of Paul’s life when he was imprisoned in the Mamertine Prison awaiting execution. In this historical setting, Hyatt sets his fictional story. The Gospel writer Luke (Jim Caviezel) comes to visit Paul (James Faulkner) in prison. The film depicts Luke writing the Acts of the Apostles while with Paul. (Luke is the author of Acts, but we have no idea when he wrote it.) 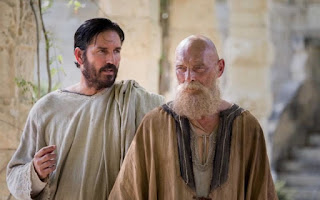 Luke is greeted by Priscilla and Aquila, portrayed as the current leaders of the church of Rome. Priscilla (Joanne Whalley) and Aquila (John Lynch) were, according to what we know from Scripture, a married couple who were co-workers with Paul in Corinth, where they, along with other Christians, lived after being exiled from Rome by Emperor Claudius. The film posits that the couple returned to Rome. It’s possible P & A were in Rome at the time, but we don’t know. (Contrary evidence; Paul wrote II Timothy while he was in Rome, and he sends greetings to the couple in that epistle.)

In the film, the church of Rome is under assault from Emperor Nero, who accuses the Roman church of burning the city at Paul’s instigation. The fires killed thousands and left thousands more homeless. Historically, it’s likely the fires were probably set by Nero’s orders, but he made Christians the scapegoats. So part of the film’s story focused on whether P & A should stay in Rome or find a way to flee the city.

Led by a young man named Cassius, some in the church want a violent rebellion against the Romans as a result of the persecution. They eventually storm the prison to rescue Paul (and Luke, who is also imprisoned at the time). They kill a guard, but Paul and Luke refuse to leave the prison, wishing to honor authorities appointed by God. Priscilla denounces the rebellion, “We do not wage war as the world does…. Love is the only way.”

There’s another subplot in the prison. The prison warden, Prefect Mauritius (Olivier Martinez), has a sick daughter, and his wife is convinced the illness continues because husband treats the Christians kindly, offending the Roman gods. Instead, Mauritius comes to believe that perhaps Paul and Luke are actually his daughter’s only hope. (A tangent: following a long-standing Hollywood tradition, most of the Roman officials have British accents, except Mauritius. He has a French accent.)

Throughout the film, Paul quotes from his own many epistles, especially his greatest hits -- like the Love Passage of I Corinthians (also used in a many a wedding). At one point Paul says, “To live is Christ and to die is gain,” and Luke lauds the phrase. Paul urges him to write it down.

The film portrays a time of great persecution for the Church. Christians are thrown to the lions in Nero’s Circus. Christians are burned in the streets as “Roman Candles” (depicted in the film). We see a young woman bloodied with her own child’s blood, killed by a Roman soldier. And yet, in spite of Cassius, the church treats the Romans with love, taking in Roman women and orphans suffering from the fires. (Mauritius mocks them for caring for the “ugly.”)

Priscilla proclaims that as the Romans devolve into depravity, the Christian Church is the “only light in the city.” So how does the Church come out in the film? I’m giving the church and church leadership 4 Steeples, Movie Churches’ highest rating. (To be honest, if the Apostle Paul couldn’t get our highest rating, the whole system would have to re-evaluated.)
Posted by churchandstates at 7:23 AM