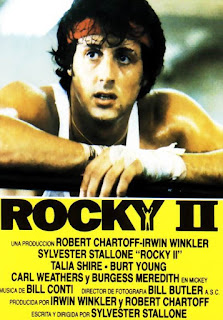 Rocky II (1976)
The ‘70’s were a good decade for movies, and the Bicentennial year was a particularly good year. Nominees for Best Picture included All the President’s Men (the Watergate scandal), Bound for Glory (Woody Guthrie during the Depression), Network (television’s descent into madness), and Taxi Driver (a homicidal cabby). These four nominees were dark stories about American corruption, but the winner that year was an optimistic story about a nobody given a shot at greatness: Rocky. Rocky Balboa was the creation of a struggling young actor, Sylvester Stallone who wrote the film's screenplay.

The story continued with sequels, including last year’s Creed. All the other films had dark, complicated characters, but Rocky Balboa is just a good guy. He loves his girl, and he loves his country. In Rocky II, the first sequel, we see his love for God as well. (Stallone not only wrote the screenplay for the sequel, he also directed it.)

In the first film, Rocky wears a cross, so we assume faith a part of his life. We see his faith more fully in this sequel. (I believe he wears a cross in all of the Rocky sequels, including Creed.) 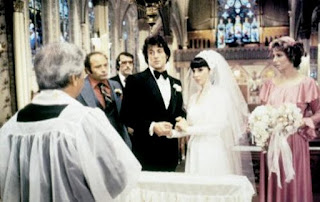 Rocky takes Adrian (Talia Shire) to the zoo and proposes to her. She accepts, and Rocky invites one of the tigers to come to the wedding. When we see the wedding, the tiger is not in attendance, and only a handful of people in a large, beautiful Catholic church.

The priest performs the ceremony in Italian, though Rocky and Adrian respond in English. Father Carmine says “You may kiss the bride” in English when the couple doesn’t understand him in Italian. At the conclusion of the ceremony, Rocky says, “Thanks Father, you done real good. I’m proud of you.”

Father Carmine then takes a Polaroid of the couple, which he seems to be taking for himself, not the couple. On the plus side, he doesn’t sell this exclusive photo to the tabloids.

In the church, Rocky is approached by Tony, the loan shark who’d previously employed Rocky as an enforcer. Tony asks Rocky if he’s looking for work again, and Rocky says, “Hey Tony, I just got married in here.” Apparently, Balboa doesn’t think the church is an appropriate place for illegal job offers.

Rocky does make a number of bad financial decisions and can’t seem to find work. He decides to take Carl Weathers), the heavyweight champion. In a press conference, Rocky is asked what he’ll do with money from the fight. He says he’ll buy a couple of hats. He says he’ll buy some muppet toys (“What’s the frog’s name...Kermit?”) And he says he’ll buy a statue for the church. 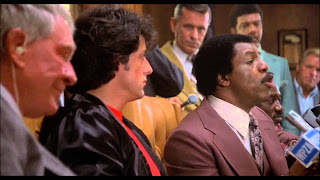 up a lucrative offer for a rematch from Apollo Creed.

Then tragedy strikes. Adrian, pregnant with Rocky’s child, experiences complications and goes into a coma. The nurse tells Rocky he will have to leave his wife’s room because visiting hours are over (fortunately, most hospitals have changed such barbaric policies.)

So Rocky goes to a chapel. (I assume it is a hospital chapel, but it isn’t quite clear. At three in the morning, Rocky’s coach, Mickey (Burgess Meredith), finds him in the chapel, where the coach tells Rocky that in spite of his “domestic issues” he still needs to fight.

“For God’s sake, why don’t you fight this guy like you did before?” Rocky is not so sure, and Mickey adds, “I don’t want to get mad in a Biblical place like this, but I think you’re a hell of a lot more than that, kid.” But Mickey agrees to stay and pray with Rocky. 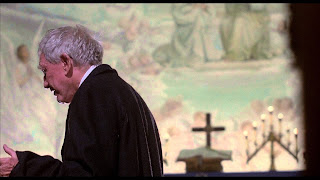 The prayers are answered, and Adrian comes out of the coma. Rocky is ready for his montage (the most effective method of training in boxing films). He even leads the children of Philadelphia up the steps of the art museum and also catches a chicken (really).

As Rocky heads for the championship fight, running late, he stops to ask for a prayer from Father Carmine. “Could you throw down a blessing, Father? So if I get beat up tonight, it won’t be too bad.”

After the blessing -- in Italian -- Rocky assures the priest he’ll “see him in church.” And when Rocky gets to the stadium, he prays by himself on his knees by the sink in his changing room.

And now for a big spoiler… Rocky wins the fight. And in his speech afterward, he says, “I want to most of all thank God!”

We don’t see much of the church and Father Carmine in the film, but the impact they have on Rocky seems pretty good, because he’s a pretty great guy, which is why we’re giving the Church and priest in Rocky II our highest rating of Four Steeples.
Posted by churchandstates at 9:12 PM