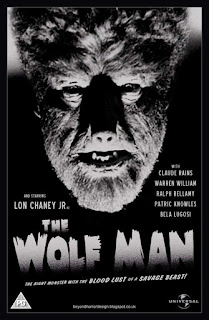 Growing up, I very much loved the Universal Monster Movies. Still do. For a time I could only admire my brother’s Aurora models of Frankenstein’s Monster, Dracula, the Mummy, and company and look at the pictures in his Famous Monsters of Filmland magazine. When the films played on Creature Features (Saturdays at 9:00 pm), it was after my bedtime. I could watch the monsters featured in Abbott & Costello movies (Abbott and Costello Meet Frankenstein, Meet Dr. Jekyll and Mr. Hyde, Meet the Invisible Man) because they ran on early on Sunday mornings. Finally, I was allowed to stay up to watch Creature Features themselves, and The Wolf Man soon became my favorite.

When I decided this October at Movie Churches should be Shift Shaper Month (primarily werewolves), I knew I’d have to watch the 1941 version of The Wolf Man because it's the classic telling of the story. I hadn’t remembered it featured a church and clergy, let alone enough to write about, but here we are.

The Wolf Man (1941) tells the story of Lawrence “Larry” Talbot (Lon Chaney, Jr.) who returns from a stay in America to reconcile with his father, Sir John Talbot (Claude Rains) at their country estate in Wales. One evening, after visiting a fortune teller in a traveling gypsy camp, Larry is attacked by a creature he assumes is a wolf, but it is, of course, something worse: a werewolf. In human form, it's aa gypsy named Bela (Bela Lugosi). Larry kills the creature but is bitten. The bite turns Larry into a werewolf as well.

One of the things I love about the werewolf legend as presented in this film is that it captures truths about human nature. There is a bit of folk wisdom, a poem, that is repeated by almost every important character in the film. Sir John; Larry’s love interest, Gwen (Evelyn Ankers), and the old gypsy woman, Maria (Maria Ouspenskaya). The poem even appears on a title card at the beginning of the film: “Even a man who is pure in heart, and says his prayers by night, May become a wolf when the wolfbane blooms and the autumn moon is bright.”

The werewolf seems to represent the dark impulses in even the best of men. Larry and his father have a conversation about the psychological and spiritual divisions in the mind and soul. The father doesn’t believe in literal werewolves, but believes they are a metaphor of a human truth. (Their conversation reminded me of the internal debate of the Apostle Paul in Romans 7, “I do not understand what I do. For what I want to do I do not do, but what I hate I do.”) As Larry and Sir John talk about such things, they hear church bells ring. Sir John says, “Time for church. You know, Larry, belief in the hereafter is a very healthy counterbalance to all the doubts man is plagued with these days. Come on.”

When Larry arrives at church, people outside the building are gossiping about the latest death. It seems to be a very large church in a very small town. Larry enters to see the pews filled, and almost everyone turns to stare -- to glare -- at him. Larry doesn’t stay, but leaves his father and hurriedly exits through the back door.

It is an interesting question: should everyone be welcomed into a church? I remember a conversation with a student in a Sunday School class who insisted that everyone should be welcome in church. I asked if that included drug dealers and sexual predators in the congregation with children.

“Everyone should be made welcome,” she insisted.

I think a little more nuance than that should be involved in a decision-making process, but certainly, the people of the congregation shouldn’t have been gossiping about the outsider -- Larry Talbot -- and should have made him welcome. (Although with an evening service on the night of a full moon, maybe not.)

There is also a clergyman in the film. A minister (probably Anglican) goes to comfort the old gypsy woman, Maria, in the loss of her son, Bela. The minister wants to hold a formal service saying, “My dear Maleva, we can’t bury this man without prayer.”

She answers, “There is nothing to pray for, sir. Bela has entered a much better world than this. At least that’s what you ministers always say.”

He answers, “And so it is. But that’s no reason to hold a pagan celebration. I hear your people are coming to town dancing and singing and making merry.”

She says, “For a thousand years, we Gypsies have buried our dead like that. I couldn’t break the custom even if I wanted to…”

The minister sighs and says, “Fighting superstition is as hard as fighting against Satan himself.”

Of course, the minister would probably consider werewolves a supers0tition. Gypsies know better in the world of the film.

But still, the minister seems to be a man of compassion. And Sir John seems to have found comfort in his local congregation. So we are going to give both a rather generous Movie Churches rating of Three Steeples. 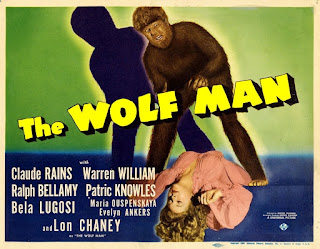 Posted by churchandstates at 10:50 PM