Back to School Month: Girls' Town (with Robots) 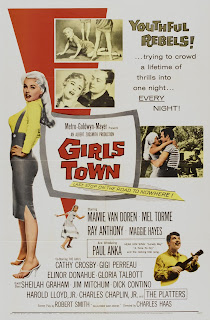 Girls' Town (1959)
We often say we’re here to review churches and clergy in films, rather than review the films themselves, but we still want (as much as possible) to view the films as the filmmakers would prefer their work to be seen.

When we can, we watch films in a movie theater since films are designed to be viewed on the big screen. If that isn’t possible -- and since we usually aren’t viewing current films, it usually isn’t -- the next best thing is to watch films on DVD or streaming on a decent home screen. Watching a network or cable broadcast of a movie that's interrupted by commercials and edited for length and content is far less desirable. Even worse are films recorded from broadcast television and posted to Youtube. The video and audio quality of such postings are generally abysmal, but sometimes that’s the only place I can find some films.

On the other hand, sometimes I find movies on Youtube that aired on Mystery Science Theater 3000, and that can be the most pleasurable way to watch a film possible. The show is known to its fans as MST3K, and it began on an independent Minneapolis station in the 1980s. The show eventually moved to Comedy Central, then the SciFi Channel. It now makes its home on Netflix. 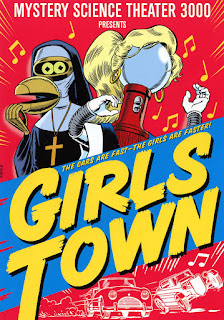 The premise of the show is that a man trapped on a satellite in space is forced to watch bad films with his robot friends. The hosts (first Joel, then Mike, and now Jonah), watch the movies with us, mocking them along the way. I doubt filmmakers appreciate having their films deemed satire fodder for the show, but it's fun for the viewer.

And it was through MST3K via Youtube that I watched Girls’ Town, a 1959 teen exploitation film about a Catholic girls' reform school. The film focuses on one of the young women, Silver Morgan (Mamie Van Doren), suspected of killing a young man, who's sent to Girls’ Town because there's not enough evidence to send her to prison. Silver struggles to get along with the nuns who run the institution and with the other girls who reside there. She also must deal with the vengeful friends and family of the dead man.

There is much for the robots (and the host) to mock in the film. For one thing, there are the young pop idols found in the cast. Mel Torme plays Fred, a young thug who's involved in a strange form of no-hands drag racing (one of the robots thinks Mel looks like “a young Jabba the Hut.”) The film introduces Paul Anka to the screen as a good guy who does charitable performances at Girls’ Town, even singing “Ave Maria” (“I love the Paul Anka Mass!” exclaims one of the 'bots.) The Platters give quite a decent performance, which puzzles the robots and Mike (they're not used to quality acts -- at Anka’s concert, one of the robots says, “You know, if they were Baptists they could have got the Platters.”) 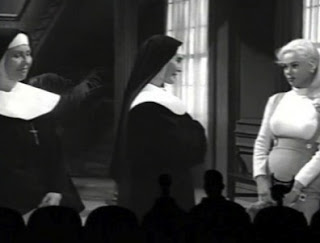 On the other hand, the nuns of Girls’ Town come off very well. Mother Veronica (Margaret “Maggie” Hayes) welcomes Silver by saying, “Most of the girls call me ‘Mother.’” Silver is surprised to see no walls or fences around the buildings, and girls happily playing volleyball.

One of the nuns suspects Silver will be a hard case and says, “That one will get the back of my hand.”

Another nun responds, “I think it would be better to give her patience.”

“And when patience runs out?”

"Pray earnestly, until you give her a pop to the kisser.”

It should be noted we never see corporal punishment used by the nuns. 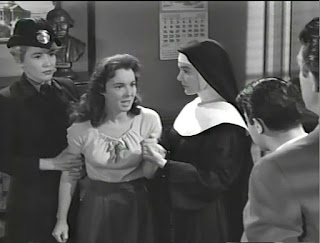 Silver sees a statue of a saint and asks about it. She’s told it is St. Jude, the Patron Saint of lost causes (one of the robots says, “He used to be with the Mariners.”) Silver is told she can bring her requests to him. Silver asks what good that would do. She is told, “Just as television and radio carry voices from great distances, think of him as a microphone that brings your requests to the ear of God.”

As a Protestant, I’m not a big fan of praying through the saints, but Silver eventually comes to a breaking point and brings her requests to the statue of St. Jude. And God hears her requests.

Silver has problems following the rules of her new home, such as not smoking. The girls have their own system of discipline, and Silver is sentenced to mopping up the floor of the room where the Paul Anka concert was held. Mother Veronica comes alongside her to clean, but Silver says, “I don’t need help!”

The Mother responds, “We all need help.”

And Silver definitely needs help. When her sister, Mary Lee (Elinor Donahue) is abducted by Fred and his thugs, the other girls at the home help rescue her. Even Mother Veronica, some other nuns, and Paul Anka come to her aid to take on the delinquents.

Mike and the robots are not wrong to mock the hokey cultural relic that is Girls’ Town. But Mother Veronica and the other nuns in the film are compassionate and do seem to really change the lives of these troubled girls, earning our highest Movie Church rating of Four Steeples.
Posted by churchandstates at 8:18 PM