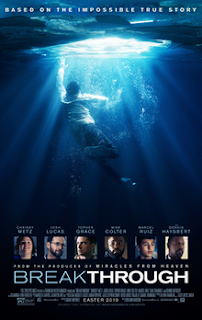 Breakthrough (2019)
It’s Christian School Month here at Movie Churches, but of course, we need to talk about church and clergy as usual, as well as schools. This week, we need to start off by talking about the NBA (National Basketball Association, if you’re acronym averse).

It's right there in the opening credits: “Executive Producer Stephen Curry.” Yes, that Stephen Curry, who plays for the Golden State Warriors.

My dad took me to my first NBA game in 1976, the year after Golden State won their first championship. Rick Barry was their star in those days. Today, Stephen Curry is their star, leading the Warriors to championships in 2015, 2017, and 2018. When we were on our bar and a church in every state tour in 2016, we watched every Warriors game we could catch as they went on to set the record for most wins in a season. (Even now, as I write, I am wearing Stephen Curry socks. I put on the socks because I knew I’d be writing this, but still…)

Anyway, Curry started a production company, Unanimous Media, and 2019’s Breakthrough is their first project. Curry said, “It’s a story about the power of prayer and perseverance and one I immediately connected to. After reading the script, I knew I wanted to be a part of bringing it to life onscreen.”

The script is the true story of John Smith, a 14-year-old boy who fell through the ice in a lake in Missouri, was declared legally dead, but revived when his mother prayed for him. John recovered fully, and his mother wrote a book about their story.

When we first see John (Marcel Ruiz) in the film, he’s talking with his dad at breakfast as John gets ready for school. His dad, Brian (Josh Lucas), talks to him about the upcoming game between the Kansas City Thunder and the Golden State Warriors. (I couldn’t help but wonder if that was in the script before Steph signed on.) His mother, Joyce (Chrissy Metz), takes John to Water of Life Christian Middle School. (Most Christian schools I know don’t have a separate middle school. Most I’ve known are K - 12 or K - 8. But such things do exist, and the real Water of Life school seems to be pretty big.)

John goes to his history class, where his teacher, Mrs. Abbott (Nancy Sorel), leads students in the Pledge of Allegiance. After that, each student is supposed to give an oral report on their family history, but when John is called on, he says he didn't have time to prepare it. He eventually presents a slap-dash report where he says that he's from Guatemala. “My mother didn’t want me.” The Smiths, who were missionaries there, adopted him and brought him back to the United States. John is obviously troubled and angry.

Basketball is important to him, but even there he’s having difficulties. He gets into fights with other players. (I was puzzled by John’s basketball schedule. He plays a game on Sunday afternoon of Martin Luther King Weekend. I’m rather surprised a Christian school would schedule Sunday games, especially on a holiday weekend.) After the game, during that holiday weekend, John and his friends play on a frozen lake, and all of the boys fall through the ice.

The other two boys are rescued pretty quickly, but John slips under the ice and spends many minutes in the freezing water. When he's found and pulled out, he's taken to the hospital and eventually declared dead. His mother prays for him, and John revives. Because he spent so long without oxygen, it's assumed he'd have brain damage and physical impairment, but he recovered fully. He was back to school in a month.

When he returns to Mrs. Abbott's history class, she asks him to stay after class and asks him one of the most incredibly inappropriate questions I can imagine a teacher asking a student. “John, why does God chose to save some and not others? You see, my husband died two years ago, and…”

But when John is in the hospital, the pastor is there. Joyce tells him it’s not the time for him to interfere in her family's life, but he responds that it is his role to be there. He’s not leaving. He stays through that first night in the hospital. After John has had time to recover, Jason allows him to tell his story in a worship service. Firefighters, paramedics, hospital staff, and almost everyone from the school is there. The local news, which has covered his recovery, is there. Eventually, Joyce begins to appreciate Jason for his care and faithfulness (but she still hates his haircut).

As for our Movie Churches rating (which, of course, is not a rating of the film) for the church and Christian school, we’re giving them a Four Steeple Rating for the way they support of John and his family.
Posted by churchandstates at 7:02 PM