Back to School: Heaven Help Us 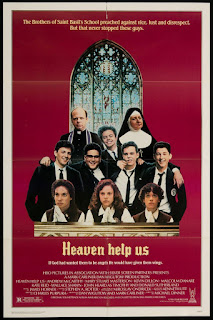 I’m a sucker for coming of age films. I love classics like American Graffiti, The 400 Blows, Say Anything and Boyz n the Hood. In the last few years my favorites have included The Way, Way Back, Boyhood, and Sing Street.

This week’s “Back to School” film is very much a coming of age story. Set in Brooklyn in 1955, Heaven Help Us (1985) has all the elements of the genre: young love and a first kiss, learning to stand up to bullies, schoolhouse pranks, driving mishaps, and even our young hero coming to a new school. Especially good for us, that new school is a Catholic school -- which allows us to examine it here at Movie Churches.

Andrew McCarthy plays Michael Dunn, the new kid at St. Basil’s Boys Prep. He soon makes friends with the academic nerd, Caesar (Malcolm Danare), and makes an enemy of the school bully, Rooney (Kevin Dillon). And he finds love with Danni (Mary Stuart Masterson), a teen girl who manages her father’s malt shop down the street. These are all fun characters played by charming young actors but they aren’t our concern. We're here to look at their school's teachers and administrators, who are all Dominican Brothers. We’ll look at four of these clergy and see how they rate on the Movie Churches steeple scale.

Brother Timothy (John Heard) is also new to St. Basil’s. We first see him playing a game of chance with Rooney with baseball cards at stake. He takes the kid’s Mickey Mantle (but returns it later.) He hangs out in the malt shop where the boys from the school and girls from the neighborhood hang out and buy their cigarettes. (He smokes there as well. The Surgeon General’s Report on smoking came out in 1964.) It should be noted he doesn’t seem to be doing these things to be cool. He’s a young guy, and these are the things he does. And it does help kids relate to him. Michael feels comfortable even talking to him about girls. Brother Timothy encourages Michael to ask a girl to dance during a school function. Michael asks, “What if it doesn’t work?”

Timothy responds, “Start thinking about joining a religious order.” Both of them laugh.

All the boys seem to respect him and learn from him. He’d get at least 3 Steeples in the Movie Churches ratings. 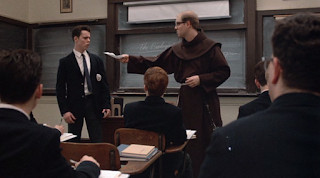 Brother Constance (Jay Patterson) has been at the school for many years. When Caesar comes into his class chewing gum, the Brother forces him to keep the gum on his nose for the remainder of the day -- which is a minor thing compared to his treatment of Rooney.

Rooney didn’t do an assignment, so he pretends to read from a blank sheet of paper when he's told to present his report to the class. Brother Constance pulls him to the front of the classroom by the ear, slams his head against the blackboard, and forces him to eat the blank piece of paper. Another time, when Rooney removes all the screws from Caesar's desk so it falls apart, Constance has all the students get down on their knees until “the joker comes forward.” Constance tells the students, “I’m not a man who enjoys violence, in fact I get better results with ‘Patience.’”

He brings out a paddle with the word “Patience” burned into the wood. In a climactic moment towards the end of the film, Brother Constance punches a student. A student punches him back, bringing cheers from the whole school. Brother Constance would probably receive our lowest Steeple score of One.

Father Abruzzi (Wallace Shawn) has less time in the film. His big moment comes at the school dance, when the girls of Virgin Martyr get together with the boys of St. Basils’. He is given the assignment of giving a lecture before the fun begins. He says the purpose of the dance is to help “boys and girls grow with strong moral fiber.” He warns the students to “never confuse love with the deadliest of the seven deadly sins, lust.” Which confused me, as I’ve always thought of pride as the worst, it being Satan’s fatal flaw and all. He goes on to warn about “the deadly beast within you” that will take you “down in the farthest pits of hell… where your flesh will be ripped from your bones by hell’s serpents.” He closes this opening sermonette with, “Have a nice time, enjoy the dance.” His neglect of the grace and forgiveness found in the Cross leads to a lowly Two Steeple rating for Vizzini… Sorry, I meant Father Abruzzi.

And finally we come to Brother Thadeus (Donald Sutherland), the principal of St. Basil’s. Thadeus welcomes Michael to the school, informing him that at St. Basil’s the Mass is still in Latin, students should wear black shoes rather than brown, and that he will be addressed as “Brother Thadeus rather than sir” (to which Michael responds, “Yes, sir, Brother Thadeus, sir, I mean…” Michael seems quite intimidated.

Brother Timothy observes Brother Constance’s abuse of students and he brings his concerns to Brother Thadeus who tells him that Constance is a quite able teacher and being new, Timothy shouldn’t stir up trouble.

In the film’s conclusion, Brother Thadeus eventually demonstrates that he agrees with Brother Timothy, but this comes after many years of Brother Constance harming students. We can't do more than to also give Brother Thadeus a Two Steeple rating. And that brings St Basil's score to an average rating of Two Steeples.
Posted by churchandstates at 11:38 PM