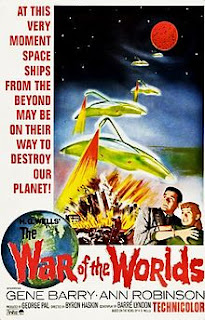 When Abraham Lincoln was asked whether God wore Northern Blue and sang along with “Battle Hymn of the Republic” (or something like that), Lincoln famously answered, “Sir, my concern is not whether God is on our side; my greatest concern is to be on God’s side, for God is always right.”

The good news the 1953 film adaptation of H.G. Wells’ classic science fiction novel War of the Worlds is that in the battle between the Earth and Mars, God is on our side. He’s rooting for the Green Planet and not the Red. (Spoilers will follow.)

The film opens with a shot of a “meteor” passing over a small town. We clearly see a church, and then we see the crowd outside of a movie theater watching the spectacle in the sky; a clergyman is in the throng. Also watching the “meteor” are three men camping. We later learn they’re “scientists.”

The townspeople go to investigate the site where the projectile from space landed. They speculate that this could be a tourist attraction, bringing revenue to the area. The clergyman suggests they could install picnic tables but someone counters that more money could be made from a restaurant. They are joined by the campers, and we learn one of the campers is the eminent scientist, Dr. Clayton Forrester (the name will sound familiar to fans of Mystery Science Theater 3000). Sylvia van Buren, another onlooker, knows the scientist by reputation and introduces him to her uncle the clergyman, the Rev. Dr. Matthew Collins of the Community Church.

The Pastor invites Forrester (Gene Barry) to come to a square dance at the town social hall (perhaps doing a little matchmaking for his niece). Everyone seems to attend the dance, except three men left behind to guard the “meteor.” Things do not go well for the guards as the “meteor” turns out to be a Martian spaceship equipped with deadly weapons.

The dance seems to be going well, but suddenly the lights go out. People look for candles, and Pastor Collins announces, “We always say ‘Good Night, Ladies’ at twelve o’clock, but hey, my watch isn’t working!” It’s good to see that even in the midst of an alien invasion, the pastor is concerned about the moral propriety of curfews. Forrester and Collins go to investigate and see the alien spaceships. The pastor says, “We better get word to the authorities.” 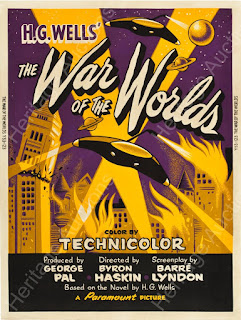 The scientist replies, “You better get the word to the military.”

The authorities and the military come, and they confront a deadly Martian attack. For some reason Forrester and Collins are included in the strategy meetings of officers and mucky mucks. The scientist I understand, but why include the minister?

When the military is looking for a military response to the invasion, the pastor says,  “But Colonel, shooting’s no good.”

“It’s always been a good persuader,” the Colonel responds. I guess it’s good to see that the U.S. military is looking for moral council.

Pastor Collins says, “Shouldn’t you try to communicate first, and shoot later if you have to.” The pastor doesn’t convince.

Collins tells Sylvia what he’s thinking, “I think we should try to make them understand we mean them no harm. They are living creatures out there.”

Sylvia responds, “They’re not human. They may be more advanced than us.”

Collins tells her,  “If they’re more advanced than us, they should be nearer the Creator for that reason. No real attempt has been made to communicate with them.”

Collins decides take things into his own hands. He walks toward the space aliens, taking off his hat, quoting Psalm 23, and holding up a Bible decorated with a cross. They blow him away with heat rays. Soon, aliens have taken over most of the planet.

Sylvia is distraught about her uncle’s death, and she tells Forrester a story of her childhood. When she was small, she wandered off and got lost. Her family and friends looked for her, but it was her Uncle Matthew that found her, in a church.

The Martian news looks bad. Forrester says, “The Martians should be able to take over the earth in 7 days.”

“The same amount of  time it took to create it,” Sylvia responds.

Sylvia and Forrester go to Los Angeles but are separated.  Forrester begins to look for her in churches, first going to a battered building where the congregation is singing “O God, Our Help in Ages Past.” The pastor in a clerical collar prays for a miracle, but Sylvia is not there, so Forrester moves on. He finds people lighting candles in a Spanish language church but still no Sylvia. Finally he goes to a church with stained glass windows, lit by candles, families gathered. There he sees Sylvia, and he makes his way to her through a crowd. A Martian ship attacks the church, but suddenly crashes.

The congregation had been praying for a miracle, and a miracle occurs. Martian ships fall around the globe. Church bells ring. A narrator tells us that “Man was saved by one of the littles things God put on his Earth.”

Germs. The Martians had no resistance to Earth germs, and they all died. So apparently, God is the God of the Earthlings, but not the Martians. I guess I’m okay with that.

The good heart of the Rev. Collins, welcoming churches, and the pastoral prayers for miracles earn four steeples for the Movie Churches of The War of the Worlds.
Posted by churchandstates at 1:09 AM

Email ThisBlogThis!Share to TwitterShare to FacebookShare to Pinterest
Labels: science fiction, war of the worlds