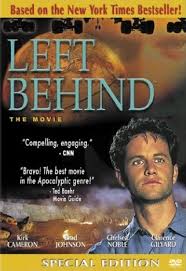 Left Behind: The Movie is based on Left Behind: The Novel by Jerry Jenkins and Tim LeHaye (though the writers are not credited in the film). The book was a huge New York Times bestseller that spawned a great number of sequels and spinoffs, so many people must have enjoyed it; I could only make it through one chapter. This isn’t the first time Movie Churches has looked at a Left Behind film. (It’s kind of like Hamlet -- there’s been more than one adaptation.) Previously reviewed was the far more entertaining adaptation of the story, starring Nic Cage.

The Left Behind series is based upon a particular interpretation (known as dispensationalism) of prophetic and apocalyptic passages of Scripture. Without getting too deep in the theological weeds, most people who hold to this system (which certainly does not include all Christians) believe that before Christ returns He will gather all believers out of the earth (in an event called the Rapture), and then the people remaining on the earth will face seven years of difficulty called the Tribulation.

So, getting back to that first question, would the film best be described as belonging to the genres of “prophecy” or “apocalyptic vision” rather than science fiction? Even if you hold to the theological tenets supported by the story, the film has elements that no one would argue come from Scripture. These elements belong firmly in the realm of sci-fi.

For instance, there is something in the film called “The Eden Project” that makes barren land fruitful. An Israeli scientist in the film perfects a formula for growing plants in the desert, and he desires to use his discovery for the good of his nation (“Eden is not for sale, not for money. All I want is peace for Israel”).

So that concept alone would place the film in science fiction territory. If you throw in Kirk Cameron playing Buck Williams, a widely respected investigative reporter for a leading television news network, that just adds to the film’s science fiction cred. (If this movie still doesn’t work for you as a science fiction film, you may go back and read the post for Contact.)

As for that second question, here’s the problem. Is there actually a church to consider, since the premise of the film is that the church is taken away? Thankfully for our purposes, a bit of the film takes place before the Rapture occurs, so while you could perhaps rule out sequels for examination in Movie Churches (and I am thankful for these little favors), this film does have a bit of church. And the church building isn’t raptured, so there’s that. 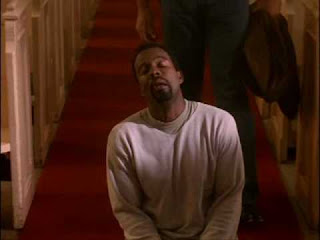 Before the Rapture, we see Pastor Bruce (played by Clarence Gilyard of Walker: Texas Ranger) visiting the home of airline pilot Rayford Steele (Brad Johnson). I’m sure we’d all feel safe if we knew our pilot’s name was “Rayford Steele,” but “Brad Johnson” is a pretty manly name as well.
Rayford’s wife and son attend church regularly*, but Rayford does not. Pastor Bruce brings up the issue saying, “Haven’t seen you for a while, Ray.”

The pilot replies, “People still have to fly, even on Sundays, Bruce.”

The Rapture takes place while Ray is flying to England. Many of his passengers vanish, leaving their clothes behind. All children are taken in the Rapture (I didn’t get the exact age cut-off), along with all true Christian believers.

Ray returns home to find his college-aged daughter Chloe, but not his wife or son. He suggests, “Maybe we should try the church. If your mom is right, there won’t be anyone there anyway.”

Chloe reminds her father that he used to say the church was just a crutch that his wife used after her mother’s death, and Ray responds that church is where his wife spent most of her time and was happiest. Which speaks well of the church in the film.
But the church is not completely empty when Ray goes there. He finds Pastor Bruce. It seems that even though Pastor Bruce taught about Christ, even taught a dispensational view of the Rapture, he didn’t really believe it himself and was Left Behind (title drop). Ray finds Pastor Bruce praying, “I knew your message, I knew your words, I stood right here and preached them. And they’re gone. Knowing and believing are two different things. I’ve been living a lie. Oh God, I am kneeling before you, asking, use me, just use me.” Ray assures him that his presence for him is an answer to the prayer.

This poses a real problem when it comes to rating the church with the appropriate number of steeples. Pastor Bruce didn’t believe what he was preaching, but he was so effective that everyone who regularly attended the church went with the Rapture.

Fortunately, the church seems to have a stock of video tapes that were apparently marked, “Play this in case of Rapture.” On them, Pastor Vern Billings of New Hope Billings Church warns viewers, “If you’re watching this, the church has been raptured,” going on to warn about the upcoming years of tribulation. Reporter Buck Williams watches one of these tapes, and he’s immediately convinced.

The film ends with many open questions, and was obviously made with sequels in mind. But they’re Churchless sequels. and therefore will not be covered here. We’re giving the Church in this film 3 Steeples for getting so many of its congregants off-planet in the Rapture.

*We know Ray’s son goes to church because when the kid talks about swords and putting people’s heads on pikes, Ray asks, “Where do you come up with this stuff?”

“Sunday School,” the boy replies.
Posted by churchandstates at 12:58 AM