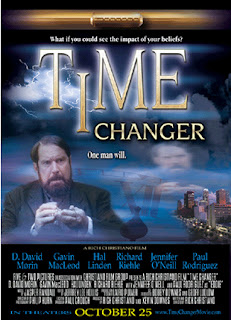 The stakes connected with the outcome are key to a good drama. That’s why so many superhero films have a villain trying to take over/destroy the world -- because people in the audience think, “Hey, I live on the planet Earth, this matters to me.” Even a single life on the line is pretty high stakes. In A Man for All Seasons, Sir Thomas More’s life is at stake, but even more, his integrity is at stake. People care about his choices.

What’s at stake in the Christian science fiction film Time Changer? Whether a writer can get his seminary to endorse his new book. The publisher has purchased the book and is ready to print it, but the seminary upvote could make a difference in the book’s sales. Are you riveted yet?

Rich Christiano, along with his brother, made short films for churches, but this feature is the fulfilment of his dream to bring an engaging Christian story to the movie theaters (which, in the film, he makes clear that he considers them dens of iniquity). He managed to bring together a cast of great stars of television (Gavin McLeod of The Mary Tyler Moore Show and Hal Linden of Barney Miller) and the screen (Jennifer O’Neil of Scanners and Paul Rodriguez of Tortilla Soup).

Russell Carlisle is a 1890 Bible scholar who has written a book about how society would profit from the teachings of Jesus, even if those teachings aren’t associated with Jesus Himself. He brings this book for an endorsement to a seminary where it is enthusiastically reviewed by everyone except one seminary professor, Norris Anderson (Captain Stubing).

Anderson argues that you can’t separate Christ from His teaching, “You cannot reform society with teaching of the Lord without the Lord of the teachings.”  To persuade Carlisle of the truth of his argument, Anderson asks the writer to travel in a time machine to the future. (You know how it was back with those Victorians, after H. G. Wells got a time machine, everyone wanted a time machine.) Carlisle scoffs at the idea of time travel, arguing that he is a man of science and doesn’t believe in such things. Anderson argues he is even more sciency and convinces him to take the trip.

Carlisle goes to the future, and we see his adventures and bafflement as he encounters cars, toy cars, and traffic signals -- with supposed hilarious results, because fish out of water stories are always funny. Unless the fish just flops on the sand and dies, which is that not funny. Humor is hard.

Anderson gave Carlisle coins and currency that prove to be very valuable, allowing him to buy clothes and lodging. (As a hotel clerk, even if someone has a lot of cash, I’m not renting them a room if they have no form of proper identification.)

Eventually, Carlisle visits a church, which we were glad to see here at Movie Churches, because that’s what we’re supposed to be writing about here. He found the church when he asked the proprietor of a laundromat (Rodriguez) where he can go to worship. “Can you recommend a Bible-believing church I can attend tomorrow morning?”

Carlisle finds a church that he admits has good Bible teaching, but he is again appalled that people in the church don’t have much enthusiasm in their worship, and they have a strange array of programs that fill up a week. People in the congregation seem to think nothing of spending every night of the week doing church activities. There’s sports night, outreach night, Bible study night, bowling night, and most amazingly, movie night. 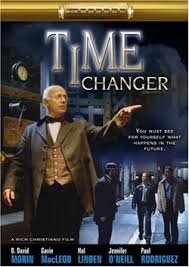 The church’s movie night seemed strangest of all. People met at the church, and a van takes them to a movie theater on discount night and drops everyone off. People go to different films at the multiplex. Carlisle is again shocked and appalled that the Lord’s name is used in vain in the film, and he tries to alert the management who, for some reason, don’t take his complaints seriously.

After Monday’s film, the church group heads to a private home for what appears to be a cocktail party sans cocktails. They don’t seem to be talking about the film, until Carlisle raises the blasphemy point. Everyone else defends the film as having a moral outcome (“The man goes back to his wife”). Don’t these people have jobs? How can they all be off work in time to get something to eat, then go the movies (or whatever the evening’s church activity might be), and then have time to go to a party and mill around chatting every night of the week?

Outreach night at the church is pretty strange as well. The church sends people out to visit people who have visited the church in order to persuade them to become members. And they send Carlisle out to talk to people, even though they know nothing of his background or theological leanings. For all they know, Carlisle could be a snake handling advocate who thinks the Trinity is blasphemy, and yet they send him out as a representative of the church. (Spoiler: it doesn’t go well.)

Carlisle is shocked and appalled by much he sees in the world, such as mannequins in the department store in skimpy outfits. And somehow, he makes the illogical leap that the moral depravity in the world is due to people separating Christ’s teaching from Christ, as taught in his book. But there are so many conceivable factors that could have led to the changes in the world, it’s downright silly for him to make that leap.

But he goes back to his own time and changes his book, gaining Anderson’s approval for his revision. The seminary gives its stamp of approval to the text. Which is why we live in the world we live in today, morally pristine with everyone in church every Sunday.


We’re giving the Movie Church in the film Two Steeples, mainly because I like movie theater field trips.

Posted by churchandstates at 3:41 AM