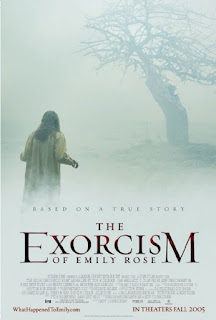 Halloween is coming, which means Movie Churches is once again taking a month to celebrate scary things in churches. We aren’t talking about that casserole dish at the potluck that looks like pork in jello or teaching Junior High Sunday School. We’re talking about a particular subgenre of horror films this month: exorcism films. Every since 1973's blockbuster, The Exorcist, there has been a steady stream of film about demonic possession. I've always thought someone should make a film about the exorcism Jesus performed in Mark 5.)

That quote might be particularly true about exorcism films, because they're all about the confrontation of God vs. the devil, good vs. evil. For Christians, this confrontation is more than just metaphor.

The Exorcism of Emily Rose is “based on a true story.” Studios and marketeers like to say that a lot when promoting horror films, but Derrickson insists this one really is, really! The film blends genres, joining a horror film and a courtroom drama.

Father Moore (Tom Wilkinson) is on trial for the murder of Emily Rose (Jennifer Carpenter), a young woman who died in the process of an exorcism. The film follows the trial and flashes back to the exorcism.

We don't get a lot of church in the film, but we get a lot of the priest, Father Moore. He befriends Emily and her family and tries to meet her spiritual needs. He works with doctors in treating Emily, but eventually, Emily takes a turn for the worse. He continues to try to minister to her but her health continues to decline, and she dies.

An interesting aspect of the film is that the prosecuting attorney (Campbell Scott) is portrayed as a Christian. We don’t have a conflict between religion and science, but between believers with different perspectives. There are Christians who doubt the reality of satanic forces, but Father Moore says, "Demons exist whether you believe in them or not."

In the course of the film, we see Father Moore stick with Emily and her family through dark and frightening events. He says, "Once you've looked into the darkness, I think you carry it with you for the rest of your life."

The church urges Father Moore to plead guilty, because the church doesn't want to drag out these ugly matters in court. Moore pleads innocent, because he wants to get the truth out in the open. He also is willing to take the consequences of a guilty verdict.

For the compassion of Father Moore, his willingness to face danger, humiliation, and pain for the sake of the Gospel and for doing what he thinks is right, I give his ministry Three Steeples.

Posted by churchandstates at 6:27 AM