On the Small Screen in North Dakota

From what I could find, there are a dozen films set in North Dakota; just three of those were actually filmed in the state.  Fortunately, one of those three is the film the film we watched. It’s also the one film people are likely to have heard of, the Coen brothers’ Fargo. Much of the film takes place in Minnesota, but the title tips the film into North Dakota territory.

The film tells the “true” story of a botched kidnapping that leads to murder. There are many seedy characters in the film, from the sleazy car salesman to the bubble headed prostitutes to the killers themselves. But one delightful character reminds the audience that there is good in the world: Frances McDormand’s Oscar winning role of Marge Gunderson, an extremely pregnant police officer who handles the case. 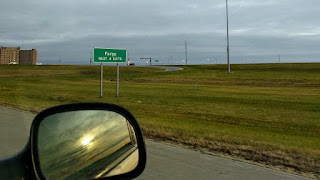 The film also won Ethan and Joel Coen an Academy Award for best screenplay for dialog such as Marge’s lecture to a killer on the sordid nature of his crime: “And for what? For a little bit of money? There’s more to life than a little money, you know. Don’tcha know that? And here ya are, and it’s a beautiful day. Well, I just don’t understand it.”

There is no church or clergy in the film, but Marge and her husband affirm the presence of grace in the world.

Most North Dakota films weren’t filmed in the state. For example, 1932’s The Purchase Price, in which Barbara Stanwyck plays a torch singer who becomes the mail order bride of a North Dakota farmer, was filmed on a California studio.

Also filmed in California were two films starring John Wayne that are set in North Dakota. 1940’s Three Faces West was a contemporary film about Viennese refugees from the Third Reich who come to North Dakota and are aided by the Duke.  The other, Dakota (1945), is a Western where Wayne’s wife wants to live in Fargo while Wayne’s character wants to go to California (of course, the Duke secretly has the last laugh, because they are actually in California the whole time).

Other Westerns set in North Dakota were also filmed in different places. 1956’s 7th Cavalry, a Western about the aftermath of Custer’s defeat (starring Randolph Scott) was filmed in Mexico. And 1952’s Bugles in the Afternoon, another Custer Western set at Fort Lincoln (this one starring Ray Milland), was filmed in Utah.

Surprisingly, only one major theatrical feature has been made about the Lewis and Clark Expedition: 1955’s The Far Horizons. Two of the three major characters were very well cast, Fred MacMurray as Captain Meriwether Lewis and Charlton Heston as Lieutenant William Clark. And there is one awful piece of old Hollywood casting, the Native American heroine, Sacagawea, was played by Donna Reed. No filming in North Dakota; the film was made in Wyoming and California.

A film set in a variety of states which I’ve been tempted to include in previous posts is Disney’s 1994 adventure film, Iron Will. It’s the story of a young man who tries to save his family’s North Dakota farm by participating in a dog sled race from Winnipeg, Canada, to Saint Paul, Minnesota. Shooting took place in Minnesota, Wisconsin, and even Montana, but not South Dakota. 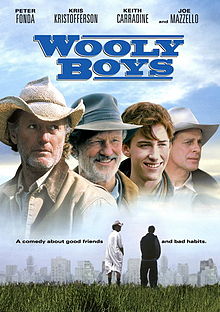 Two horror films have been set in North Dakota. 1993’s Leprechaun, starring a pre-Friends Jennifer Aniston, is about a little green man who will kill to get his gold back. It was actually filmed in California. And 2007’s The Messengers, starring Kristen Stewart, about an evil force that brings murder and mayhem to a small sunflower farm, was actually filmed in Canada.

1978’s Northern Lights, an independant film about the Nonpartisan League, a Populist movement founded in North Dakota in the early 1900’s, won big at the Cannes Film Festival and has been widely forgotten ever since. But it was filmed entirely in North Dakota. And 2001’s Wooly Boys, a Western starring Peter Fonda and Kris Kristofferson, is widely forgotten elsewhere but remembered fondly within the state -- probably because so many people knew someone who was an extra in the film.

Posted by churchandstates at 10:19 PM