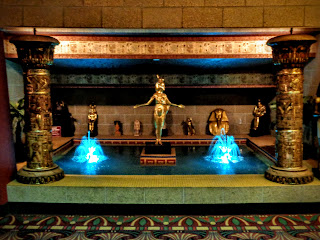 Universal Studios has a new Mummy film coming out next summer (with Tom Cruise and Russell Crowe), and I certainly know the place you should see it if you’re in North Dakota: the Grand 22. This theater took the Egyptian theme and ran with it. They have the place stuffed with replicas of pyramid knick-knacks, sphinxes, and the cat’s Mau.

We paid a little more for our tickets for this show, which initially annoyed me. Then I realized that one of the reasons they needed to charge more might be that this theater doesn't show TV commercials before the movie (as many chain theaters do). 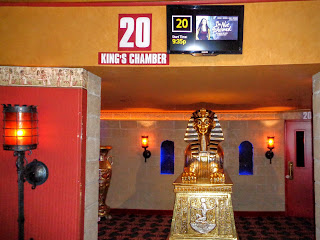 Then I saw the cool decorations. Besides all things Egyptian, they also have an assortment of old movie posters and lobby cards. The best thing of all are the curtains.

This may not sound like a big deal, but it is. Many theaters used to have curtains, but very few do these days. There is something truly wonderful and mysterious about hiding the screen behind a curtain until the lights go down. It’s good showmanship to keep the screen hidden until it is time for the show. 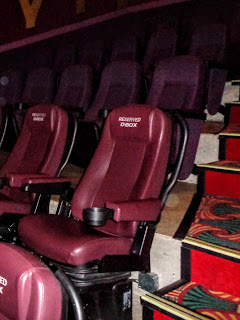 Another bit of showmanship (perhaps of the P. T. Barmun variety) is D-Box seats, moving and vibrating seats that bring people closer to the action. Since we were watching the film I’m Not Ashamed (which is about the Columbine shootings), I didn’t really want to feel the action. But the moving seat in the demo before the show was pretty cool.

I’m Not Ashamed is the story of Rachel Joy Scott, the young woman who was considered by many to be a martyr for her Christian faith. She was the shooters’ first victim that day, April 20th, 1999. It has been claimed and disputed that Eric Harris asked the young woman, “Do you believe in God?” as he held a gun to her head. She is said to have responded, “You know I do” before she was killed by a shot to the head. 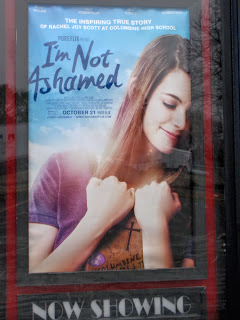 But the day of the massacre takes only up only a small bit of the film’s running time. Most of the film is about Rachel’s years in high school leading to that day. One of the things I appreciated about the film is that it doesn’t portray Rachel as the ideal Christian youth. She is a bit boy obsessed. She struggles with partying, drinking, and smoking. (Well, I’m pretty sure she was meant to be portrayed as smoking. Some scenes show Rachel on the smoking grounds with other students smoking. Her fingers are positioned as if she’s holding a cigarette. But it seems CGI was used to digitally eliminate the cigarettes. There is even a moment when it seems Rachel’s empty hand is emitting smoke.)

This is a Christian film without any recognizable faces (except, perhaps, the Christian singer Jaci Velasquez, who appears as Rachel’s high school drama teacher). Though the film is set in Colorado (our next state to visit), it was actually filmed in Tennessee.
Posted by churchandstates at 5:11 AM