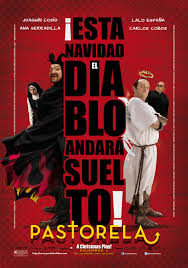 C. S. Lewis wrote in the preface to The Screwtape Letters, “There are two equal and opposite errors into which our race can fall about the devils. One is to disbelieve in their existence. The other is to believe, and to feel an excessive and unhealthy interest in them.”

The church in the 2011 Spanish language film Pastorela takes another tack altogether; it seems to give the devil a place of honor. The film is about a Catholic church in Mexico City that annually puts on a Pastorela, a nativity play in the tradition of the Mystery plays of Medieval Europe. It tells the creation of Adam and Eve and follows history up through the birth of Christ. But apparently, the most coveted role is that of Satan, who tries to persuade the shepherds and Magi not to worship the Christ Child. Satan is given the cleverest lines and is portrayed as witty and charming.

The little church in the film has a long tradition of Pastorelas, and for years a policeman, Jesus, has had the part of the devil. But the parish priest dies (from a heart attack while having sex with a nun) and the replacement priest, Padre Edmundo Posadas, casts someone else in the role of the devil. We first see Posadas performing an exorcism. When the victim of exorcism vomits on the priest, the priest slugs him.

Did I mention this is a comedy?

Most of the rest of the film is a war between the policeman and the priest over the role of Satan. But each seems to give the Devil a large role in their lives.

Everyone in the film, including the priests and the nuns, swears profusely. A particularly winning line from a priest is “God bless you and go (expletive) your mother!” which encapsulates blasphemy and vulgarity and hostility together rather smugly.

We begin to suspect as the film goes on that the exorcist priest has himself become possessed. And the war of roles in the play becomes a literal war which includes guns, swords, and a beheading.

I’ve heard the phrase, “That’s what Christmas is all about” said about many things, but not about anything that is said or done in the church in this film. Usually 1 Steeple is the lowest rating we give any Movie Church (and that has included churches where clergy murdered people), but we’re making an exception here and giving the church in Pastorela Zero Steeples.
Posted by churchandstates at 7:47 AM

Email ThisBlogThis!Share to TwitterShare to FacebookShare to Pinterest
Labels: exorcism