Iowa Films on the Small Screen 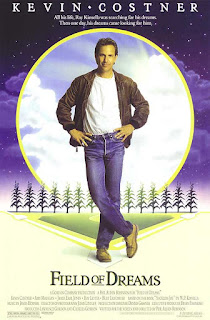 Though there is, of course, an urban side to Iowa, most Iowa films are set in rural areas and are about small town life. Filmmakers usually take one of two perspectives on life in the corn: rural life as an ideal or as the habitation of hypocrites and busibodies.

You know how I just wrote in the last paragraph that rural Iowa is generally presented as wonderful or awful? Well, Field of Dreams presents an Iowa farm as a place that can be mistaken for heaven. And it shows a small town PTA meeting full of censoring harpies.

Kevin Costner plays former hippie Ray Kinsella, who buys a farm and then hears a voice telling him he should plow under corn and build a baseball diamond. Then disgraced baseball legend “Shoeless” Joe Jackson will appear.

In other words, that same old plot Hollywood is always recycling.

It could be said that the film is about the clash of conservative and liberal values, particularly in families. But the film suggests that reconciliation and healing can be found in the American Pastime.

This year, when there is such great political division and strife, could everything be made right if the Cubbies win the World Series? Probably not. But in addition to being nominated for the Oscar for Best Film, Field of Dreams always leads the polls as the film that can make men teary eyed.

Back in 1933, when a far greater percentage of Americans lived on farms, rural life was more likely to be presented as a wonderful thing. State Fair presents the adventures of a farm family spending a week at the Iowa State Fair. Small town values are celebrated, perhaps most by Will Rogers, the great American cowboy humorist who stars in the film. State Fair was remade two times, in 1945 with Dana Andrews and music from Oscar Hammerstein and again in 1962 with Pat Boone and Ann-Margaret. Though all three films are set at the Iowa State Fair, only the 1933 version was filmed in Iowa.

The Iowa State Fair is featured again in 2011’s Butter, but in this film farm folk are far from idealized. The film is about butter sculpting, a competition at the fair. The subjects sculpted for the competition include the Last Supper, the Holy Grail, and a replication of JFK’s assassination. The film is a satire that presents locals as idiots and/or religious fanatics, and it isn’t even filmed in Iowa. It’s filmed in Louisiana, because really, what’s the difference between those flyover states?

A better satire is 1971’s Cold Turkey, in which Dick Van Dyke plays an Iowa pastor who tries to get his entire small town to quit smoking. Norman Lear used his success as the creator of TV’s All in the Family to make his debut as a feature director, but this was his only feature film. Small town life does not come off well in the film. (This film really deserves a post of its own in Movie Churches.) It was filmed in Iowa.

David Lynch has made many strange and depraved films about urban and rural life, but he’s only made one G rated film, 1999’s The Straight Story. It tells the true story of Alvin Straight (Richard Farnsworth), an old man who drove a lawnmower from Iowa to Wisconsin in order to reconcile with his brother. It is a tender story that did use actual Iowa locations.

Another film based on a true story that celebrates rural values is 1944’s The Fighting Sullivans (aka The Sullivans), the story of five brothers who grew up in Iowa, then went off to serve together in the Navy in World War II. Made while the war was still in progress, it was a story of tragedy with the intention of inspiration. But the film was made completely in Hollywood.

Another film meant to boost the spirits of the American public in WWII was 1943’s Happy Land. Set in Hartfield, Iowa, it tells the fictional story of a couple whose son is killed in the war. Fanciful visits from soldiers who have died in previous wars bring the couple hope and inspiration. This was not filmed in Iowa but in my hometown, Santa Rosa, California. 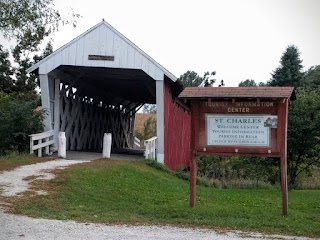 The Bridges of Madison County is not a film that would have been made during World War II or at anytime when tthe Hayes Code monitoried the moral content of films. Clint Eastwood directed himself and Meryl Streep in the story of a photographer who comes to Madison County to take pictures of covered bridges and has a brief affair with a local housewife.

Sometimes, instead of making Iowa into heaven, filmmakers have made Iowa into hell. A remake of a George Romero film, 2010’s The Crazies, was reset in Iowa rather Pennsylvania. In both films, murderous insanity hits a small town like a contagious plague. Not really a good film, but it does have Tim Olyphant of Justified and actual Iowa location filming.

Another film that makes Iowa an unpleasant place to be is the 1994 adaptation of the classic Robert Heinlein novel, The Puppet Masters. The story is similar to Invasion of the Body Snatchers, with aliens taking on human form. In much of the film, California replaces Iowa as aliens replace humans in the film, but there was a bit of filming in Des Moines.

But the idealized vision of Iowa has probably dominated the unpleasant Iowa in films, especially in the most optimistic of genres, the musical. 1957’s The Pajama Game, about a labor dispute at a sleepwear factory, is a satire, but Iowa must be a wonderful place if Doris Day lives there. (Sadly, it was all filmed in Hollywood.)


Of course, if there is one film that rivals Field of Dreams as The Iowa Film, it is the 1962 adaptation of Meredith Willson’s beloved musical, The Music Man. In this story, is Iowa heaven or is it hell? On the debit side there are such song lyrics as, “Oh there’s nothing halfway about the Iowa way to treat you, when we treat you, which we may not do at all.” But if you have the opportunity to sing along with such delightful music and be in the presence of someone as charming as Robert Preston’s Harold Hill and as lovely as Shirley Jones’ Marian the Librarian, then Iowa is a heavenly place.
Posted by churchandstates at 7:15 AM