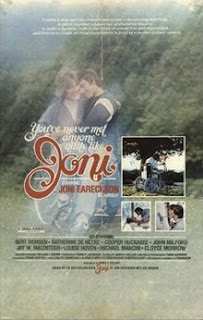 Joni (1979)
We here at Movie Churches readily acknowledge (along with most critics) that the majority of Christian films are pretty bad. In spite of that, we're celebrating Classic Christian Films month, and we're happy to say that this production from World Wide Pictures (Billy Graham’s production company) is quite different. It’s a biographical film starring its subject, Joni Eareckson.

Hollywood has a mixed record of people playing themselves. There have been notoriously bad self-portrayals by sports figures such as Jackie Robinson in The Jackie Robinson Story and Muhammad Ali in The Greatest. On the other hand, World War II hero Audie Murphy’s portrayal of himself in To Hell and Back led to a long, successful film career. Joni is Eareckson’s one narrative film performance, but it was lauded by Janet Maslin of The New York Times.

Joni begins with the diving accident that resulted in a fracture between the fourth and fifth cervical levels, resulting in tetraplegia (in other words, Eareckson was paralyzed from the shoulders down). The rest of the film is about Joni coming to accept her diagnosis and her learning to live her new life. 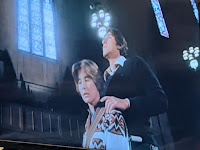 She was 17 years old at the time of her accident and had been quite athletic, enjoying horseback riding, hiking, tennis, and swimming. She quickly knew she would no longer be able to use her legs, but in time she learned she would never have full use of her arms as well.

Many Christian films, such as the recent hit, Breakthrough, portray healing from a medical standpoint. Many Christian films about sports portray Christian athletes always being victorious, winning the big game or the big race. This film offers no physical healing.
Many Christian films portray a troubled person turning their life around when they come to faith in Christ. Eareckson was already a Christian when she dove into the lake, breaking her neck. The film shows how her God was present with her through anger, depression, doubt, and suicidal thoughts. Those aren’t places most Christian films are willing to go.

Another major theme in the film is Joni’s romantic life. At the time of her accident, she had a boyfriend. While she was recovering, he supported her in many ways, but as time went on, the relationship reaches a point where Joni breaks up with him because she feels it's not fair to him to continue. She meets another man who believes that he has enough faith for Joni's healing. He takes her to an empty church and asks her to pray for healing. They do pray, but that healing doesn’t come. And that relationship ends. 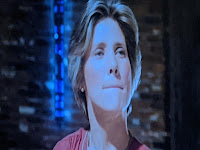 This is another example of the film not offering easy answers. It portrays the real longings of a quadriplegic woman for romance, for a relationship. (It doesn’t shy away from kissing scenes between Joni and the actors who play her boyfriends, either.) But the film doesn't give Joni a romantic happy ending. (Sometime after the film came out, Eareckson did find a lasting romantic relationship. She and Ken Tada were married in 1982, three years after the film was made. And they are still married.)

Perhaps you’ve noticed there isn’t much in the way of clergy and churches, which are supposed to be the focus here. It's surprising we don't see clergy visiting Joni in the hospital or rehab facility. 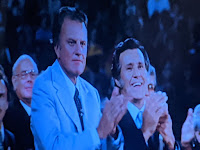 At one point, we do see Joni wearing a Young Life t-shirt. Young Life is a parachurch organization that works with high schoolers. According to her autobiography (which is the basis for the film), Young Life staff greatly influenced Joni, but we don't see them. We saw her visit an empty church with a boyfriend, but there is nothing about the church itself (it seems to be Roman Catholic -- lots of candles -- but that's all we know about it.)

In the conclusion of the film, we see Joni speaking at a church, telling her story. We then see Joni speaking at a Billy Graham crusade. There is a cameo from Billy Graham himself -- we see him but don’t hear him.
Joni went from a time of great pain (physical, spiritual, and emotional) and doubt to being an encouragement to people around the world. The film demonstrates Joni’s work as an artist (holding pens and paintbrushes in her mouth) and a singer. It doesn't show what happened later: she founded “Joni and Friends,” an organization that has done much to advocate for the disabled, particularly in the church.

I greatly admire Joni Eareckson Tada and her ministry. Though we don’t see much about the church at the end of the film, or the crusades of Billy Graham, any organization that invites her to speak gets Four Steeples from Movie Churches.
Posted by churchandstates at 7:11 PM