Classic Christian Film Month Checks out The Cross and the Switchblade 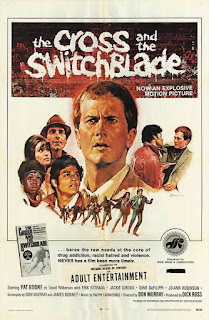 The Cross and the Switchblade (1970)
It’s tough to watch old films about youth gangs without snickering. West Side Story is a wonderful musical, but watching those tough guys do ballet steps in the marvelous opening scene makes the average moviegoer giggle. Through the years 1970's pioneering Christian film The Cross and the Switchblade has been the recipient of much mockery. Deservingly so.

The first of only three films directed by actor Don Murray (who earned some cult cred by playing Governor Breck in Conquest of the Planet of the Apes and Bushnell Mullins in the reboot of Twin Peaks.), it tells the true story of a small-town preacher, David Wilkerson, who went to Brooklyn in 1958 to minister to the gangs. Wilkerson served as a technical advisor on the film. (The film opens with a word from the producer warning that you might find this story “unbelievable” but assuring us it’s true.)

In spite of its status as nonfiction, some aspects make for difficult serious viewing now, starting with the casting of Pat Boone as Wilkerson. In many ways, that casting makes good sense. Wilkerson is supposed to look clean-cut and out of place, but with Boone, we’re getting the very personification of clean-cut. The man made commercials extolling the virtues of milk and was known for making rock’n’roll “safe for the young people." He really seems like a nice guy but isn’t the greatest thespian (though there is no greater admirer of his work in Journey to the Center of the Earth than 6-year-old me). Nonetheless (at least according to Wikipedia), Boone worked hard to get David Wilkerson's book made into a movie. 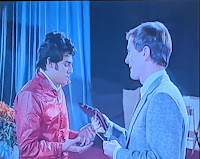 Making his screen debut in this film is Erik Estrada as Nicky Cruz, the roughest of the rough, the second in command of the Mau-Mau gang. It’s difficult for audiences of a certain age to not think of Ponch, the motorcycle officer from the long-running series CHiPs. He went on to play the role of Erik Estrada in movies like Van Wilder and shows like My Name is Earl.

Everything in the film looks much cleaner than one would expect, and the gangs seem much better dressed than I expect. Wilkerson encounters street people with cute names like Little Bo, Bottle Cap, Mingo, Augie, and Big Cat (the leader of the Bishops, the Mau Maus' African American rival gang).

A common complaint about Christian films that deal with a criminal element is that the language is kept pure, and it is rather jarring to hear a gang member exclaim, “Aw, shucks!” The same complaint might be made about films about young thugs (such as Blackboard Jungle) made while the Motion Picture Production Code (the Hays Code) was still in effect. In this film, there's an attempt to give a flavor of rough language in the film. When Nicky asks a fellow gang member why the preacher seems to have picked him out for special attention, his friend responds, “Because you’re the worst, craziest bastard there is. If he can reach you, he can reach anybody.” This “B” word is used at least twice in the film, along with a scattering of “damn”s. This must have come as quite a shot to those who were watching 16mm prints of this film in churches during the seventies, but verisimilitude is still an issue here. 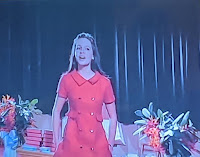 The soundtrack by Ralph Carmichael (who provided the soundtracks for many of Billy Graham’s World Wide Pictures) is not very representative of the time or place. It often sounds more like the background music in TV shows like The Brady Bunch or Dragnet, when a “rock” album would be playing at a party (without any vocals).

But fortunately, this blog doesn't exist to review the films, but to review the clergy and churches in films. And the Reverend David Wilkerson (as portrayed in this film, certainly) was a very admirable man. He is literally willing to give the shoes off his feet. The film shows his passion for young people in gangs and on the streets of New York City. He left a comfortable ministry in Philipsburg, Pennsylvania, to serve the impoverished youth of New York City. His ministry had an impact on gangs and young people struggling with addiction. 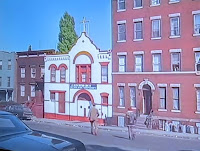 He managed to preach effectively on the streets of New York City (sometimes with, and sometimes without the support of local law enforcement). “I’m just a country preacher 300 miles from home. Is there anything in your life you’d like to change? You got hate sticking out of your eyes. You pretend you don’t want anyone to touch you, but inside you’re crying out for love. Pray with me that the Holy Spirit will come into your heart and make you a new man.” In another street sermon, he says, “May I say something? There is someone who loves you very much, He knows about the drinking and the marijuana and He knows what you’re looking for when you’re playing with sex. You guys talk about getting high, He’ll get you high but He won’t let you down.” 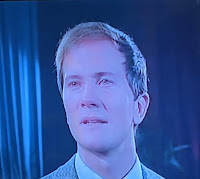 He clearly assures the gang members, addicts, and homeless that they are loved by Jesus.

We also see Wilkerson accepted (and housed) by a Hispanic church fellowship when they discover he has been sleeping on the streets of New York in his car. They are quite surprised to find him, “What miracle brings such a fine young man to our troubled streets?” asks the pastor. That same congregation takes in a young woman, Rosa (Jacqueline Giroux), to detox from her heroin addiction.

The end credits note that Wilkerson went on to found Teen Challenge, an organization that continues to help people deal with alcohol and drug addictions. (I currently work in this field, and I should note that the organization continues to do fine work.)

So Wilkerson and the churches that support him receive our highest Movie Churches rating of Four Steeples.
Posted by churchandstates at 8:59 PM