It's Dead in Church! 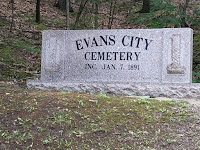 Back when I was a youth pastor, I once organized a zombie night for the high school youth group. A woman, not part of the church or (as far as I know)  connected to the youth in any way, sent me an email. She had heard about the event and wanted to let me know I was exposing the youths to great evil and imperiling souls.
Here I thought I was teaching the kids some important spiritual truths.

This incident came to mind as Mindy and I were sightseeing in Pennsylvania recently. Early in the morning, we went to Evans City to see their cemetery, the one used in the opening scenes of the 1968 horror classic, Night of the Living Dead. The film opens with a brother and sister, Barb and Johnny, visiting their father’s grave. Their dialog is all that brings the film into the realm of Movie Churches. 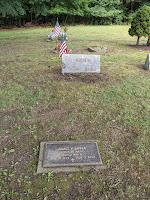 Barbara is praying when her brother says, “Hey, come on, Barb. Church was this morning… I mean, prayin’s for church."
She responds, “I haven’t seen you in church lately.”
He answers back, “Well, there’s not much sense in my going to church.” Though zombies have yet to make an appearance in the film, Johnny is foreshadowing the possibility that judgment is inevitable and it is too late for any redemption the church might have to offer him.

These themes are made more explicit in the 30th-anniversary commemorative edition of the film that had additional scenes, including some with the Reverend John Hicks, a clergyman who warns, “This is like the flood that happened during Noah’s time or the destruction of Sodom and Gomorrah! We are being punished for our sins! The dead are rising, and Judgment Day is upon us!” It appears in the film that the Rev. Hicks and other ministers didn’t do enough for the Church to bring people to repentance, possibly, along with other possibilities like chemical warfare and a virus in space, causing the rise of deadly cannibalistic zombies. 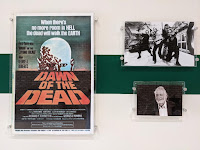 The themes of spiritual emptiness and spiritual needs return in the first sequel to Night of the Living Dead, Dawn of the Dead.  In that film, a small group of survivors from zombie attacks take refuge in a shopping mall (specifically, the Monroeville Mall, which Mindy and I were also able to visit, though the museum was closed). Zombies flock to the mall (though they are initially locked out) and one of the survivors, Francine, says, “What are they doing? Why do they come here?”
Stephen, another survivor of the zombie attacks, responds, “Some kind of instinct. Memory of what they used to do. This was an important place in their lives.” 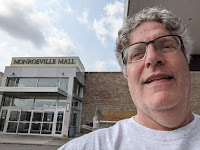 This reference to the mall as an important place in the former lives of zombies not so subtly satirizes the materialism that dominated many lives, leaving little room for the spiritual. (There is no church in the Monroeville Mall; churches in storefront spaces wasn’t a thing back in 1978 when the film was made except in some very large cities downtown areas. It's more common in suburbs now.)

Though there isn’t much church or clergy in either film, the films’ director and co-writer, George Romero had some interesting church connections in his life. Romero wrote and directed the 1973 film, The Amusement Park, for the Lutheran Society, condemning our society's abuse of the elderly. But apparently, the organization found the film too bizarre and grim and wouldn’t release it. In 2018, a print of the film was discovered, the film was restored, and this year it was released on Shudder, the horror streaming service. 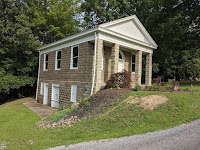 Romero also played a role in saving a church. In 2011, Romero made a contribution of $50,000 to repairs for the chapel of the Evans City Cemetery, spearheading the funding raising drive. Along with the donation, he wrote a letter to the city thanking them for their contribution to making the film that made his career. The chapel doors were locked the day we visited, but through the front windows, we could see enough to know that the drive was successful. 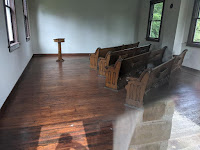 Still, I think the greatest contribution of the Dead films is the way they bring a spiritual truth to life. The Apostle Paul wrote in Ephesians 2, “As for you, you were dead in your transgressions and sins, in which you followed the ways of the world and of the ruler of the kingdom of the air, the spirit who is now at work in those who are disobedient. All of us also lived among them at one time, gratifying the cravings of our flesh and following its desires and thoughts. Like the rest, we were by nature deserving of wrath. But because of His great love for us, God, who is rich in mercy, made us alive with Christ even when we were dead in transgressions - it is by grace you have been saved.”

Maybe it’s just me, but I can't read, “You were dead,” “gratifying the cravings of our flesh,” and “we were dead” without thinking of Romero’s shambling zombies. So that was the scripture passage I sent to the concerned emailer, I never heard from her again.

Posted by churchandstates at 12:21 PM