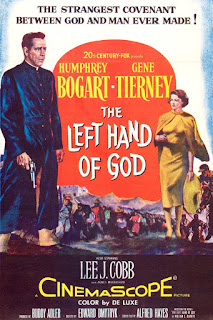 Movie Churches is of the opinion that Humphrey Bogart is the greatest movie star of all time. (We usually confine ourselves to opinions about clergy in films, but this is such an obvious truth, it barely merits discussion.) Still, he has a serious flaw. Unlike, say, Robert Duvall (arguably one of the greatest film actors, which is different from a movie star) who appeared in many church-related films, Bogie never played a clergyman.

He came closest in 1955’s The Left Hand of God (directed by Edward Dmytryk), where his character pretends to be a priest. The film is set in a remote region of China, and it opens with Bogie -- in clerical garb -- arriving at a mission awaiting a priest. Bogie claims to be that priest, “Father O’Shea.” Dr. David Sigmund (E.G. Marshall) runs the mission hospital. He and his wife, Beryl (Agnes Moorehead) are assisted by nurse Anne "Scotty" Scott (Gene Tierney).
The first sign that Father O'Shea is not who he claims is the gun among his belongings (if you don’t count the sign that he’s played by Humphrey Bogart.) The morning after he arrives, the “priest” is awakened by altar boy John Wong (played by Victor Sen Yung, one of the few major Chinese roles in the film played by someone of actual Chinese descent.) Bogie is obviously startled when John says, “Good morning, Father, you say Mass?”
The new priest looks at the crucifix above his bed and seems to remember where he is and who he’s supposed to be.

John explains that he has been carrying on the work of the church as best he could, but a priest is needed for many duties. When Bogie asks what needs to be done, John says, “42 marriage. Many months since priest came. 36 baptisms. Should be more, but maybe more come now that you are here… Many people want confessing.”

Before doing any of these things, the “priest” says, “I would like to take a look around the village.” Scotty the nurse takes him on a tour, and he makes an un-priestly remark about going on a walk with an “attractive woman” (a comment that could easily get a man in trouble these days, not just priests). Scotty is taken aback by the remark, but he explains, “I wasn’t born a priest, In fact, I can remember when I was voted loudest dresser in college.”

The villagers seem so surprised by a priest walking around the town that we wondered if the previous priest ever left the Mission. One of the villagers asks "Father O'Shea" to bless his sick grandfather, and Bogie blesses the old man, making the sign of the Cross as he does so. He then asks the old man to give him a blessing -- to the pleasure and astonishment of all around.

As the ersatz priest continues to be pressured to give Mass, he goes to the mission library to find a “Selected Sermons” book from which to crib. He pretty much just reads from First Peter for his sermon (which is not a bad idea), then he amazes the congregation by addressing them in what seems to be the local Chinese dialect.

Though most in the community are impressed by the new priest's work, Dr. Sigmund is not (though he does admit, “Father Coleman didn’t accomplish as much as you have in this short time.”). The doctor claims  “there is no earthly reason to keep it open.”
Bogart responds, “Not earthly ones, but spiritual.”
The doctor says with the threats of local warlords and the communists there is too much danger to continue the work. He asks “O’Shea” to talk to the Bishop about closing the Mission.

Bogie responds testily, “The Bishop and I aren’t exactly buddies. You aren’t talking to your ... patients.”
This angers the doctor and he says, “Don’t depend too much on that collar!”
Bogie seems ready to rumble, asking, “Do you want me to take it off?”
Fortunately for the priest's reputation and the doctor's health, his wife Beryl intervenes and calms them.

Things become even more awkward at the mission when it becomes obvious that Scotty is falling for the man she thinks is a priest, and he doesn’t know how to deal with it. Beryl advises him to go to talk to the local Protestant missionary, Rev. Marvin (Robert Burton). He does and admits his true identity.
His real name is Jim Carmody, and he had been an American pilot during World War II. When his plane crashed, a local warlord, Mieh Yang (played quite unconvincingly by Lee J. Cobb), rescued him and then put him to work in Yang's criminal activities. When one of Yang’s men killed a priest (the real Father O’Shea), Carmody decided to escape by taking O’Shea’s identity. Marvin marvels at the story but urges Carmody to come clean to the officials in the Catholic Church.

Things take a dark turn when one of Yang’s men discovers that Carmody is impersonating O’Shea. Carmody's betrayal angers the criminal, and he threatens not just the pilot, but also the mission and the village. When his gang surrounds the Mission, the doctor feels they have no choice but to fight back. But the “priest” has another idea. He will talk to Yang.

When Carmody had worked for Yang, they had often shot craps together. Carmody convinces Yang to let Carmody bet his freedom for the lives of those in the Mission and the village. And Carmody wins with a series of unlikely throws of the dice.

So who should we give Movie Churches’ Steeple ratings? We probably shouldn’t give it to Jim Carmody since he wasn’t really a priest. (Though he does say, “Maybe there’s a little bit of a priest in every man.”) It doesn’t sound like the priests that preceded him were any great shakes since a gangster does a better job at priesting than they did, and we don’t learn enough about the new priests to give them a rating. But the Protestant missionary, Reverend Marvin, is a good listener for Carmody’s story and gives good advice, so we’re giving him Four Steeples, our highest rating.

Posted by churchandstates at 5:43 PM