Missionary Month is on Wings of Eagles

The phrase “based on a true story” works extra hard in 2016’s On WIngs of Eagles (aka The Last Race). The film is a sequel to 1981’s Best Picture winner Chariots of Fire (which tells the story of Scottish runner Eric Liddell, culminating in his victory in the 1924 Paris Olympic Games. That victory is followed by a title card that notes that Liddell went to China as a missionary and died in a Japanese concentration camp. The sequel tells the story of that part of Liddell's life. Sort of.

The film opens with a recap of Liddell’s life, especially what was portrayed in Chariots of Fire. This is done with visuals of newspaper clippings and a voice-over by what seems to be a radio or newsreel announcer’s voice but with very unlikely text: “News from around the world: the 1924 Paris Olympics are history. Eric Liddell, the man who snatched the gold medal was offered the American dream. The famous athlete, despite multiple sponsorship offers, has respectfully said "no" to one and all. He has joined the London Missionary Society and married the love of his life, the Canadian nurse Florence MacKenzie. They will go to China where they will live a productive life, teaching and raising a family.” “American Dream”? He’s a Scot! How do they predict he will “live a productive life?” This is how no newsman ever talked (on top of that, Liddell and his wife were married ten years after he won Olympic gold.

We soon switch to another omniscient narrator who will talk us through the rest of the film. Xu Niu (Bruce Locke provides the voice of old Niu, Shawn Duo plays young Niu) reminisces, “With any luck, you will meet someone who will make you a better person. This happened for me many years ago when I met The Flying Scotsman. His name was Eric Liddell.” It is likely the real Liddell would cringe over the use of the idea of “luck” over God’s providence.

The film then follows the broad outlines of Liddell’s story. He lived with Florence in the city of Teinstin where he worked as a teacher. The film indicates that he taught the poor, when in fact he worked at a school for the children of wealthy families. He believed that those students would, in time, have a greater influence on the whole population.

Liddell continues to serve as Japanese troops invade China, though his pregnant wife and two daughters go to Canada to stay with her parents in hopes that he will soon join them. Things take a turn for the worse when the Japanese attack Pearl Harbor and the United Kingdom declares war on Japan. Liddell is arrested and sent to an internment camp. There he serves his fellow prisoners but dies of a brain tumor just months before the war’s end. These broad historical outlines are accurately portrayed in the film. It’s the little incidents that are largely imaginary. 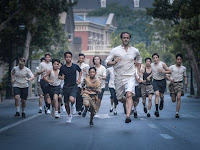 When the Japanese invade, Eric Liddell (Joseph Fiennes) is portrayed as calm and faithful. Niu’s voiceover explains, “Even though the Japanese army had looted and taken over his home, he still prayed for his enemies.” (Throughout the film, moral lessons are explained in the voiceover. The filmmakers seem to be firm believers in “tell” over “show”.)

Liddell is arrested while performing a wedding in a church and, along with the entire bridal party, is taken to an internment camp where the commander explains that the prisoners they are there for their own good, “Our Emperor will protect you. You will be kept out of danger until the end of the war.”
Liddell protests when the guards try to separate the couple he has just married, shouting, “What God has put together, let no man put asunder!”
A prison official responds, “The Emperor is the only god here.”
Liddell retorts, “We will not serve false gods.”

We see Liddell caring for children in the internment camp, teaching them and taking them for runs. The narrator explains, “He was running not just for himself but for us.” (This seems to be a real thing, Liddell did teach and provide activities in the camp, everything from chess tournaments to model boat construction to square dancing.)

When asked why he didn’t leave the country with his family, Liddell replies, “I was born here. Surely that makes me Chinese, too.” (It seems there are many who agree with him. There are some record books that hold Eric Liddell as the first Chinese Olympic Gold Medal winner.) 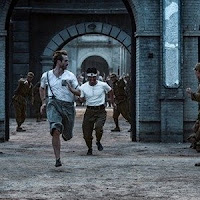 The most fanciful episodes in the film seem to be an attempt to tie into the success of the preceding film. The commander of the camp challenges Liddell to a running race. Liddell accepts, hoping to win privileges for others in the camp, but Liddell is malnourished from sharing his food with the children in the camp. He stumbles during the race and the commander wins. Later in the film, Liddell challenges the commander to another race to secure medicine for a fellow prisoner. Against all odds (and with a music score that hints at the iconic music of the first film), Liddell wins that race. I could find no evidence that anything like these races occurred in history.

But we then see Liddell cough blood, movie shorthand for “this guy is going to die.”(Although coughing blood usually means consumption rather than a brain tumor, doesn't it? We don’t claim to be medical experts here at Movie Churches.)

Though this isn’t really a good film, it does seem to accurately portray Eric Liddell as a good man. A fellow internee in the camp, Norman Cliff, said Liddell was “the finest Christian gentleman it has been my pleasure to meet. In all the time in the camp, I never heard him say a bad word about anyone.”
Another internee, Langdon Gilkey, said, “He was overflowing with good humour and love for life, and with enthusiasm and charm. It is rare indeed that a person has the good fortune to meet a saint, but he came as close to it as anyone I have ever known.”