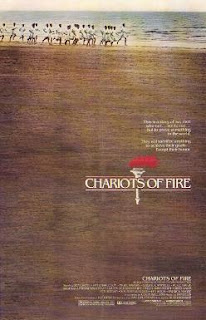 Let’s get this out of the way right now. Chariots of Fire should not have won the Oscar for Best Picture of 1981. That was the year of Raiders of the Lost Ark -- arguably the greatest action movie ever made and certainly one of my all time favorite films -- was released. But Raiders isn’t the “serious” kind of film that the Academy likes to honor, so even though director Hugh Hudson can’t be compared to Steven Spielberg as a director, that’s how things shake out.

Fortunately, as always, we aren’t here to discuss the merit of the film but rather the church and clergy in a film and, this month, how those elements interact with sports. And in Eric Liddell*, we have one of the greatest sports preachers of all time.

Strangely, the film opens with a 1978 memorial service for Abrahams, apparently in a Christian church. This seemed odd, because much of the film deals with the man’s struggle against anti-semitism, but research indicates that Abrahams converted to Roman Catholicism after his college years. The film then flashes back to the years prior to the Olympics in France.

Based on how people who call themselves Christians act toward Abrahams, one wouldn’t feel warmly toward the Church. Upon his arrival at Cambridge, someone says about Abrahams, “With a name like Abrahams he won’t be in the Chapel Choir.” Fortunately, in the person of Eric Liddell, we get a very different view of the church.

We first see Liddell officiating at a track meet for young men in Scotland. Children mob Liddell asking for autographs, idolizing him for his career in rugby. But at the time, Liddell is planning to follow in his father’s footsteps and go to China as a missionary.

We later see Liddell reprimanding a boy for playing football (soccer, as it is rightly known by Americans) on a Sunday. Then he makes an appointment with the boy to play a game with him and his friends on another day of the week. (“I don’t want the lad to grow up thinking God’s a spoilsport.”)

Liddell’s plan to go to China is interrupted when he is urged to prepare for running in the Olympic Games. Eric’s father reminds him that it’s his sacred duty to use his God given gifts to God’s glory. He is told by others that the church needs an example of a “muscular Christian.” He should “run in God’s name and let the world stand back in wonder.”

Eric’s sister Jennie is not at all pleased with the decision to delay his journey to China for something as juvenile as running. He responds with a great speech, really the highlight of the film: “I’m going back to China, after I first do a lot of running. I believe God made me for a purpose: China. But he also made me fast, and when I run, I feel His pleasure. To give it up would be to hold Him in contempt.” This is probably the best theological defense of the value of sport (and by extension art and craft) that has been ever made in a film. (Not that there are loads of such things out there.)

The film’s crisis for Liddell comes when he learns that the heats for the 100 meter dash will take place on a Sunday. Someone asks him if that will make a difference and he said, “Yah. It does.”  The English Olympic Committee is not pleased to hear about Liddell’s decision of conscience not to run on the Sabbath. But they are also unwilling to humble themselves and ask the French to make accommodations for Liddell to run at another time.

Great pressure is put on Liddell, even calling in the Prince of Wales to appeal to his patriotism. Liddell insists God must come before country. (A stuffy old Englishman on the committee says, “In my day it was country first, and then God.”)

The impasse is finally breached when another runner volunteers to withdraw from the 400 meter, allowing Liddell to take his place. Abrahams runs in the 100. Both men win the gold.

While in France, Liddell climbs the pulpit of the Church of Scotland in Paris (does such a place still exist?) where he preaches from Isaiah 40, a passage that resonates both with the Scot’s clash with authority and his running. (Verse 15 - “Behold, the nations are as a drop in the bucket and are accounted as dust on the scales”.  Verse 31 - “They that wait on the Lord shall renew their strength… they shall run and not be weary.”) Those who listened to LIddell preach knew that he was a man who sought God’s approval over the approval of men. They knew that his call to live by faith in the love of Christ was true. So, though I wouldn’t have given the film Oscar gold, I’m glad Liddell received Olympic gold. I’m sure he has received a more greatly desired heavenly reward as well. As for the MovieChurches reward? We give Liddell and the Church of Scotland in Paris our highest rating, 4 Steeples.

* Joseph Fiennes will portray Eric Liddell in a new film, The Last Race, which should be released this year.

Posted by churchandstates at 6:35 AM