Connecticut movie on the big screen 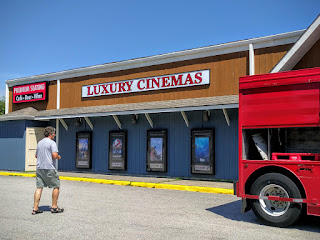 Luxury Cinema, Mystic, Connecticut
When I was young, we had an antenna for our television; we received five channels. We had KTVU, an independent station, along with the networks, NBC, CBS, and ABC -- and on a good weather day, PBS. At best there were five viewing choices, and let's admit it, most television was awfully lame back in the day. The odds of anything actually good being on the air at any given time were slim. (Which, of course, didn't hinder me from watching. I guess I thought I'd finally find something of value the sixth time I watched the Brady Bunch go camping.) 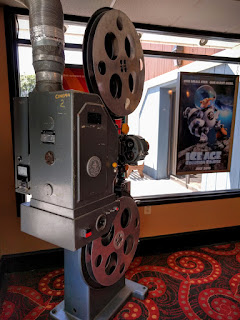 On the other hand, movie theaters were just becoming multiplexes, and double features were the norm. Our county had theaters in almost every city, and the drive-in was an option in California throughout the year. Looking at newspaper theater ads from that time, there were always a couple dozen films to choose from.

Now there has been a strange inversion of television and the movies. By using the internet, all the lame shows of my childhood are available along with the hundreds of new shows produced every year. There's Christian programming, nature shows, thousands of films, premium cable shows with budgets greater than many films.... but at the movie theaters, especially in small towns, often only three or four films, the main releases for the week, are available. 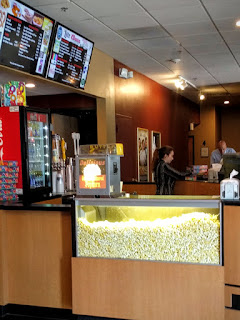 Last Friday, looking at a number of theaters in a wide geographical range, all of them seemed to be playing the same three films: Finding Dory, Ghostbusters, and The Secret Life of Pets. But we did find one theater in Mystic, Connecticut, and that was playing something different. Sure, they were playing Dory and the Pets and the Busters, but they had one other film, Hunt for the Wilderpeople. I looked it up on Rotten Tomatoes to find it was scoring 100% for critics. I found it was written and directed by Taika Waititi, the creator of the film What We Do in the Shadows, which I had really liked. So that's the movie we watched.

The Mystic Luxury Cinema itself is a charming little theater in the midst of Olde Mistick Village (a touristy mall which includes a honey store with over twenty varieties for sampling). It's always a good sign when real butter is used for the theater's popcorn. We overheard a gentleman, apparently one of the owners, saying his partner goes to a number of film festivals, which was where he came across Hunt for the Wilderpeople.

The film is set in New Zealand, and it tells the story of a foster kid's rocky search for family. Much of the film follows the boy as he ventures into the bush to evade authorities. There aren't many familiar faces, except Sam Neill. (Did you know that in 1993, Neill was named the top drawing actor for the year? It was the year he appeared in Sirens, The Piano and Jurassic Park. Although it's possible the T-Rex was the bigger draw than Sam.) 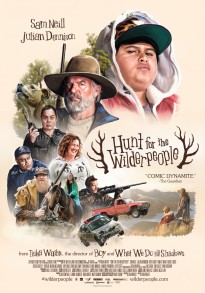 The Hunt for the Wilderpeople is great fun -- I highly recommend it. And even better for this site, it has a church. There is a sparsely attended funeral in the film in a church with a clergyman who seems to be having an off day. He seems to compare heaven to a place with unlimited Fanta soda and Twizzlers. And whenever he asks a question, a woman in the audience always answers with "Jesus."  (Which reminds me of an old joke, with which we will conclude this post. In a Sunday School class, a teacher once asked, "Tell me class, what has a big, bushy tail, climbs trees, and gathers nuts?" A world weary kid answers, "That sounds like a squirrel, but I'm going to say 'Jesus.'")
Posted by churchandstates at 9:16 AM