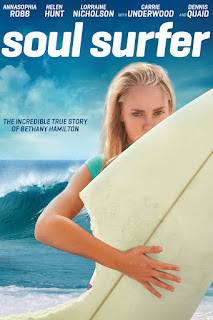 I've been involved with youth ministry on and off (and in various capacities) for over thirty years, and I've been watching movies for longer than that. I'm having a hard time thinking of youth ministry being portrayed in any way, let alone accurately, on the big screen. Sure, the jerk in The Apostle who slept with Robert Duvall's wife, Farrah Fawcett, was a youth pastor, and there have been plenty of fighting young priests who played basketball with the kids. That's about it. So Carrie Underwood playing youth pastor Sarah Hill easily moves up to the top of the list of Best Film Portrayals of Youth Ministers Ever, where she has plenty of elbow room.

We see a bit of a youth group meeting, apparently in someone's house. She's showing extreme close up slides on the walls and letting kids guess what the pictures are -- certainly the kind of activity done as a crowd-breaker or talk introduction in a typical youth group meeting. Hill uses it as an introduction to Jeremiah 29:11: "’For I know the plans I have for you,’ declares the Lord, ‘Plans to prosper you and not to harm you, plans to give you hope and a future.’” Then she talks about how it’s not possible to see God's plan up close; how we usually need the perspective of time. It's an extremely short talk, but movie audiences, like youth, have extremely short attention spans.

The film gets one detail extremely right. As the meeting ends and the kids are mingling out, Hill yells, "Don't forget to get me those permission slips for the missions trip!" The vast majority of youth group meetings end with a plea not to forget permission slips.

I suppose I should mention what the film is about. Youth ministry is really just a tiny part of the film, but I was so excited to see it portrayed at all, I got carried away. Soul Surfer is the true (mostly) story of teen Bethany Hamilton (played by AnnaSophia Robb of The Way, Way Back). The film follows her struggle to continue to pursue her dream of becoming a professional surfer after (spoiler!) losing her arm in a shark attack while surfing.

The film is populated by a number of familiar faces, Helen Hunt plays her mother, Dennis Quaid plays her father, Craig T. Nelson plays her doctor and Kevin Sorbo plays a family friend. You get the feeling there were told, "We can't pay your usual price, but the whole thing will be filmed in Hawaii."

Bethany's family is a church going Christian family, and their faith is portrayed in a wonderfully positive and natural manner. But we're not here to talk about individual or family faith but churches.

As was true for Bethany's actual church, the church in the film meets in a tent near the beach. May I say right now that whenever possible, every church should meet in a tent by the beach, because such a thing is awesome.

We see Bethany's family arrive late for church.  Youth Pastor Carrie Underwood, as part of the worship team, is leading the song, "Blessed Be the Name of the Lord." Many in the congregation seem to be just nodding their heads in rhythm rather than singing, but they might be intimidated by having an American Idol in their presence.

But (by popular request) back to youth ministry. When I worked with Young Life, one thing was really drilled into me:  youth ministry is about relationship. In the film, we observe Bethany's relationship with her youth pastor, Sarah. When pre-shark attack Bethany tells Sarah she won't go on the missions trip to Mexico so she can train for an upcoming surfing competition, Sarah appears disappointed but doesn't scold or hold a grudge about Bethany (apparently) backing out of a commitment.

We see Sarah faithfully ministering to Bethany. Sarah appears to be the person Bethany turnst to about her grief and anger. Eventually, Bethany goes on a missions trip with Sarah, a World Vision trip to Thailand to assist victims of a tsunami. Seeing people who have lost everything helps Bethany deal with losing her arm.

I remember when the film came out there was a minor brouhaha about the studio trying to minimize the use of Scripture and the name of Jesus in telling the story. But during the credits we see footage of the actual Bethany Hamilton receiving an award as she gives all the glory to her Lord Jesus Christ. So in the end, Christ was glorified. I don't imagine Jesus is too concerned about His billing in the movie credits.

The beach church and its youth minister get our highest rating, Four Steeples.
Posted by churchandstates at 11:13 AM