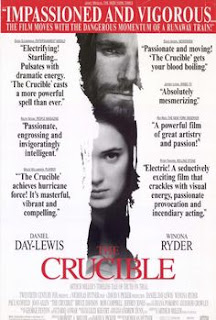 Massachusetts is one of the states with many films either set or made in the state. There are more than I can cover this week, and I needed some way to limit things. This is a state with many of the nation’s great literary names, so we’ll go with film adaptations of literary works. (Sadly, this will leave out many great Mass. films, such as The Way, Way Back, a favorite of mine.) The limitation also provides an introduction to our MovieChurches Friday post theme this month: Literary Churches.


When I was in high school, my drama teacher wanted to stage the Arthur Miller (fictionalized ) retelling of the Salem witch trials, The Crucible. My drama teacher believed the drama made telling points about a current political issue. He didn’t have enough guys available for parts, so the production never happened. I had been unsure about doing the play, partly because the church comes out horribly in the play. But then again, the Salem church didn’t handle things so well in history.


The 1996 version of The Crucible tells the story very well. Daniel Day Lewis does his usual magnificent work as John Proctor, a man falsely accused of witchcraft, and Winona Ryder is very good as an accuser. But the most interesting casting is Paul Scofield as Judge Thomas Danforth, the very antithesis of his role as Thomas More in A Man for All Seasons. The film is set, of course, in Salem, Massachusetts. It was filmed in various parts of the state.


Though the Church doesn’t come off so well in the film, individual Christians are portrayed as admirable people, faithful to God and their consciences, willing to pay the ultimate cost.


The coast of Massachusetts is the setting for other literary stories as well. Some will argue that Moby Dick is not only the greatest American novel, it is simply the greatest novel ever written. (Not me. I’m on your side Crime and Punishment.) Friday’s MovieChurches post is about John Huston’s 1956 version of the story. The story begins in the state and locations for the film include New Bedford and Nantucket.


You might not be surprised to read that Henry James’ novel, The Bostonians, is primarily set in Massachusetts or that James Ivory’s 1984 adaptation of the tale of 19th Century feminism was filmed chiefly in the state. The film also provides a chance to see Christopher Reeve without a cape or glasses and Nancy Marchand before she was a Soprano.


Massachusetts native Nathaniel Hawthorne set his classic novel, The Scarlet Letter, in colonial Boston. It continues to be read in high school English classes. (Or the Cliff Notes version of the novel is still read by high school English classes. At least the underlined sections of the Cliff Notes of The Scarlet Letter that belonged to older siblings continues to be read.) The story of a woman persecuted for bearing a child out of wedlock has had a number of big and small screen adaptations. The 1926 silent version with LIllian Gish remains relatively true to the story in spite of being filmed in California. The 1995 version starring Demi Moore as Hester Prynne was filmed in Canada, and the storyline is even more distant from the original.


The beloved novel, Little Women, set in Concord, Massachusetts, has also been made into a movie many times. The author, Louisa May Alcott, was another Massachusetts native (in fact, Alcott and Hawthorne lived in the same Concord house at different times). The 1933 version of the story, starring Katharine Hepburn and directed by George Cukor, was all filmed in California. The 1949 version with Elizabeth Taylor and directed by Mervyn Leroy was also a California studio product. The 1994 version with Winona Ryder and directed by Gillian Armstrong wasn’t made in California but Canada.


Apparently, there have have been films in Massachusetts in periods of time after the Civil War. Daniel Keyes turned his award winning 1959 short story “Flowers for Algernon” into the award winning novel Flowers for Algernon, which was adapted into the 1968 film Charly, which won Cliff Robertson the Best Actor Oscar. The science fiction film about a man with a low I.Q. turned into a genius is wonderful, but heartbreaking. The film is set and was filmed in Massachusetts.


Dennis Lehane is a living Massachusetts native who is a bestselling and award winning author. Many of his novels and short stories have been made into films. His novel Mystic River, about three friends who struggle with a history of sexual abuse, was adapted into a 2003 drama by director Clint Eastwood. It won Sean Penn an Oscar for Best Actor and Tim Robbins an Oscar for Best Supporting Actor. Lehane’s best selling novel Gone Baby Gone was adapted and directed in 2007 by Ben Affleck (who didn’t act in the film). Ben got a great performance out of his brother, Casey, in this film about kidnapping. (Children suffer much in Lehane’s world.) In 2010, Martin Scorsese directed a film of Lehane’s very odd novel about an insane asylum, Shutter Island. (All three of these films are set and were filmed in Massachusetts.)


All of the films above were adapted from works by truly great writers. Some film theorists say that better films can often be made from second rate works of literature. Maybe that’s why the trashy beach read by Peter Benchley, Jaws, is probably the best film ever made in and about the state.
Posted by churchandstates at 2:31 PM