Maine film on the big screen 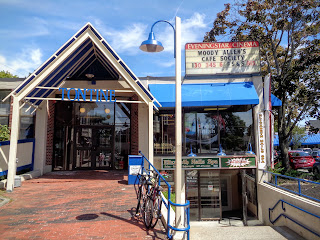 To be honest, we went to Eveningstar Cinema for the free popcorn. Researching movie theaters in Maine, I came across their website which had a flashing ad for free popcorn on their front page. All you needed to do was sign up for their newsletter. Looking at the map, we found that Brunswick wasn’t too far out of the way from our destination of Bangor.

It was even better to find that this theater is an independently run art house theater. We have, by now, been in plenty of places where the only movie options are the top half dozen top grossing films offered at a national theater chain. Usually we’ve already seen the two or three or those films that had any appeal whatsoever (because, after all, we’re going to a movie every week). We appreciate another option that isn’t geared for the 25-and-under demographic. 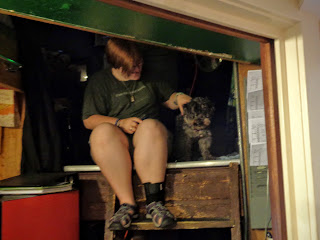 Eveningstar is a small place owned and operated by Barry Norman, the gentleman who sold us our tickets and gave us our popcorn. Barry also cleaned up the theater after the show. Apparently he’s assisted by his dog, Scooter. I don’t know what Scooter does. Perhaps he’s the projectionist.

The theater is located in the midst of a quaint little shopping mall. Though we didn’t use the couches located in the front of the theater, I would have killed for that spot as a kid. Before the show the theater ran ads for local businesses. (We had wondered whether the city of Brunswick should be pronounced with a “wick” or a “vick” at the end and we heard both in the ads. So we’re still wondering.) 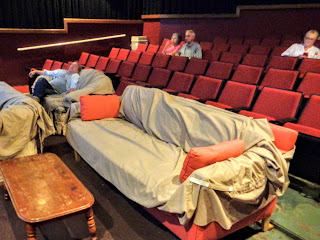 The one downside of a small art house theater is their need to program to a certain demographic. If Helen MIrren or Tom Wilkinson is cast in a story about the battle against Alzheimer’s or about starting an Indian restaurant, it’ll be booked. Another vanity project to get Meryl Streep yet another Oscar nomination will be there. And if it’s a Woody Allen film, it’ll be there.

Now, I am aware that Woody Allen is one of our greatest filmmakers. From What’s Up, Tiger Lily? through (Best Picture Winner) Annie Hall, he was making films that make me laugh even now. I consider Crimes and Misdemeanors a classic and a wonderful introduction to the topic of theodicy. As recently as 2013 with Blue Jasmine, he made a film with great characters and performances. But most of his films in this century haven’t been very good, and that would include the film we watched in Maine, Cafe Society. 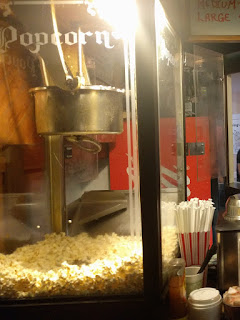 In the film, Jesse Eisenberg plays the latest stand-in for Woody in a film set in 1930’s New York and Hollywood. An advantage of a period piece is that Allen insists on writing characters who love and continually discuss jazz music, which makes much more sense in a period piece. Jesse plays Bobby, a young man who leaves New York to make his career in Hollywood, hoping for help from his Uncle Phil (Steve Carell). While in California, Bobby falls in love with a secretary (Kisten Stewart).

Allen returns to his theme of “the heart wants what the heart wants,” an Emily Dickinson line that Allen has made his own. He continually uses this phrase to justify adultery and foolish life choices as if self control, good judgement, and will power play no role in anyone’s moral universe. It really is difficult not to look as this unceasing repetition of a theme as Allen’s need to justify his off screen life choices. 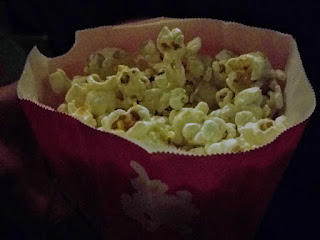 The characters were dull, and like many of Allen’s characters, they seem unaware that there is any place in the country besides New York or Los Angeles. (Bobby’s two love interests come from the Midwest, but no one would ever consider going back to those places.) Bobby declares New York is the best place to live because “Where else can you get Lindy’s cheesecake?”

But the worst thing about the film is that it’s not at all funny. I can’t think of single funny line or moment from the film. It’s bad enough if Kristen Stewart moans and whines throughout a film, but when Steve Carell does as well…that’s just not funny.

Woody Allen may yet again make a funny film. And it’s nice to know that if he does, the Eveningstar will screen it.
Posted by churchandstates at 5:57 AM