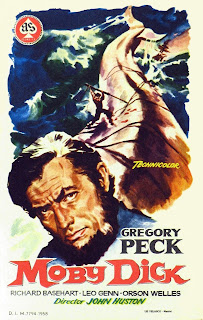 But they hardly ever talk about the church in Moby Dick. And it's sort of an awesome church, both as it was described by Herman Melville in the novel and as it's portrayed in John Huston's 1956 film.

Before the narrator of the book (and film), Ishmael, goes off to sea, he goes to church. The novel was published in 1851, and the story takes place somewhere around that time. The story begins in the whaling community of New Bedford, Massachusetts, the city from which Melville himself set off as a whaler.

In the film we see what looks like most of the town’s population flowing into a beautiful white chapel. Ishmael says that "few are the fishermen bound for the Indian Ocean or Pacific who fail to visit there." The walls of the church are covered with stone tablets and plaques that serve as memorials to sailors who died at sea (example: "In Memory of Captain Seth Culn, who was taken out of his boat by a foul line on the off shore ground in the Pacific -- March 3rd, 1828. This tablet is erected to his memory by his mother.")

We hear the congregation singing heartily, and everyone seems to have a hymnal, which speaks well of the church's finances. There is an even mix of men and women, young and old. Sailors are well represented.

As the congregation sings, the pastor emerges through a door in the front of the sanctuary. Father Mapple (played by the immense Orson Welles) sports the impressive beard of an Old Testament prophet and wears the garb of a sea captain.

The pulpit is built to look like the bow of a ship, with a large cross jutting out upwardly. Mapple climbs rigging (a rope ladder) to get into the pulpit. This probably wouldn't be allowed with the 1986 Americans with Disabilities Act, but it's cool. 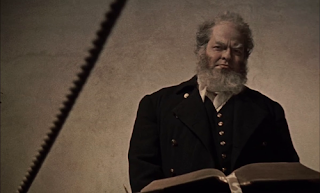 Mapple preaches on the Book of Jonah, and one wonders if he ever preaches on anything else. (Well, I'm sure he touches more than occasionally on the "I will make you fishers of men" passage. And he does refer to the Apostle Paul as the Great Pilot.) His sermon begins with a quote from the book, "God fashioned a fish." Throughout the film and throughout the novel, whales are called fish, not mammals. There is a very funny chapter in the novel that explains that whales are fish, because the Bible in Jonah says a fish ate the prophet (though maybe it was a shark).

Mapple addresses his congregation as "shipmates." "Shipmates," he says, "The sin of Jonah was his disobedience of the command of God; it was a hard command. All the things God would have us do are hard. If we are to obey God, we must disobey ourselves." Now I have some issues with that. Most of Psalm 119 is about how delight found in the laws of God. For example, Psalm 119: 14, reads, "I enjoy living by your rules."

Still, it is true that at times God asks difficult things, and it's good that Father Mapple doesn't back off from that. Everyone seems to appreciate his preaching because, after all, who can enunciate like Orson Welles?

The reason I really like this church, though, is the theme aspect of the church. I think other churches should go with this idea. Someone should build a church next to the Indianapolis Motor Speedway that looks like a track. The pulpit could be built like a racecar, and the preacher could address the congregation as his "pit crew." Or a church next to a ballpark could have the pitcher could preach from the mound with a text from Genesis 1, you know, "In the big inning..."  The possibilities are endless. But for now, I'll just give 3 steeples to Moby Dick's New Bedford church.

Posted by churchandstates at 7:25 AM