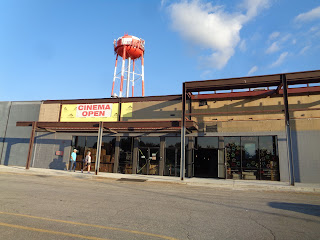 Gilford Cinema 8, Gilford, NH
We happened upon this theater en route to the Funspot (which isn’t just the largest video arcade in New Hampshire; according to the Guinness Book of World Records, it’s the largest in the world). But we found this theater, which was obviously either being renovated or being built brand new. 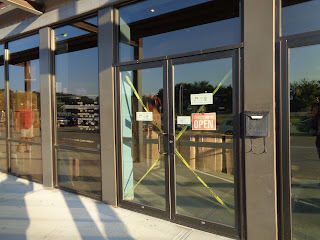 Then I see places like this, in a rural resort area of New Hampshire where people are not just putting new money into a movie theater, but even maintaining what seems to be a thriving two screen drive-in nearby. And neither of these theaters are owned by the big chains (you can’t have them all, Regal, though I saw you have some of ‘em in NH). I’m sure in a matter of weeks or months all the cardboard boxes will be dealt with, and the carpets will be laid. But for now, I found the whole mess to be a charming sight.

Our viewing options were limited. It was either a horror film (Lights Out or Nerve) which quickly won a veto from Mindy, a film we’d already seen, or one of two retreads: Ghostbusters or the new Bourne film. And now that Jason has his memory back, what’s the point? 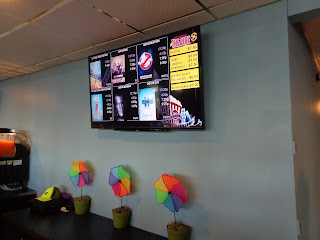 Well, we saw the new Ghostbusters and it is, in fact, awful. I’d read comments from some folks saying that the film was funny until the big CGI mess at the end. The CGI battle at the end was a mess, but the film was awful all the way through. Even the few minutes with the great Bill Murray didn’t do the trick (let alone the fleeting glimpses of Ernie Hudson, Annie Potts, Dan Ackroyd and Sigourney Weaver.) And if you think I just hate it because I am sexist, I will let you know that my wife, Mindy, who is, in fact, a woman, also thought it was horrible, but not because the main characters were also women. 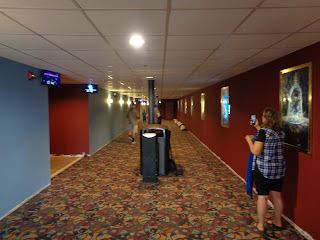 Was it bad enough for me to wish for the death of movie theaters? No. Because this year we also saw things like Hunt for the Wilderpeople, Hail Caesar, Finding Dory, Sing Street, Captain America: Civil War, and more that we loved on the big screen. But I sure hope this Ghostbusters doesn’t have a sequel.
Posted by churchandstates at 6:21 AM